I'm coming to your house for tea 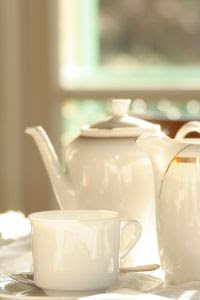 Our speaker preached about repentance this morning, a sermon very befitting the season of Lent. Her text was about I reckon the most famous Sunday School character of the New Testament, Zacchaeus.

Luke 19:1-10 (ESV)
1 He entered Jericho and was passing through.
2 And there was a man named Zacchaeus. He was a chief tax collector and was rich.
3 And he was seeking to see who Jesus was, but on account of the crowd he could not, because he was small of stature.
4 So he ran on ahead and climbed up into a sycamore tree to see him, for he was about to pass that way.
5 And when Jesus came to the place, he looked up and said to him, "Zacchaeus, hurry and come down, for I must stay at your house today."
6 So he hurried and came down and received him joyfully.
7 And when they saw it, they all grumbled, "He has gone in to be the guest of a man who is a sinner."
8 And Zacchaeus stood and said to the Lord, "Behold, Lord, the half of my goods I give to the poor. And if I have defrauded anyone of anything, I restore it fourfold."
9 And Jesus said to him, "Today salvation has come to this house, since he also is a son of Abraham.
10 For the Son of Man came to seek and to save the lost."

Her gist of the message was that confession is not equal to repentance. Jesus requires 2 things of us: one, to repent and two, to have remission of our sins.

Zacchaeus was a tax collector. In those times, the Roman empire required the people to pay taxes but they did not have the manpower to do it. So they appointed tax collectors to be stationed at their designated towns. They had a quota to meet and anything they collected over and above the quota constituted their fees. So, you can imagine the further they go in collecting, the richer they'd become. Therefore, it is obvious that nobody wants to be with them, let alone be their friends. Now Zacchaeus was not only a tax collector, he is a chief tax collector.

Here Jesus is coming to town and he is attracting a lot of attention. Zacchaeus was curious and he really wanted to see who this man was, this man whom many want to be with, something he did not have. And being of small stature, he decided to climb a tree.

Next, Jesus did something quite out of the norm. He told Zacchaeus that he is going to stay at his house, not "he wants to" but "he is going to", something one would rarely do unless invited. I hadn't think of it that way because I am so used to the story being told so many times that I just don't think much about it anymore. What would you think if I told you I am coming to your house?

In the rabbinic rules during that time, anyone caught cheating must repay the injured party the full sum plus another 20% as punity charges. Zacchaeus was so moved by what Jesus did that he did more, he decided to give half of his wealth to the poor and repay those he has defrauded 4 times the sum. And Jesus said that salvation has truly come into the house. He has not only confessed but he has repented.

The other lesson to learn is that we can draw comfort that Jesus accepts anyone who repents, which in turn has a deeper underlying lesson for us - how well do we accept others? Do we judge more than we love? But this is not an easy thing to do because we must also love with wisdom. (For a good book on this, check out D.A. Carson's Love in the Hard Places).

What do we need to confess and repent this Lent?

The next portion of Scripture the speaker refered to was a good find for me. I may have read through the bible once but it seems to me as if there are large portions of it of which I have not even seen before, and this is one of them.

2 Cor 7:9-11 (NASB)
9 I now rejoice, not that you were made sorrowful, but that you were made sorrowful to the point of repentance; for you were made sorrowful according to the will of God, so that you might not suffer loss in anything through us.
10 For the sorrow that is according to the will of God produces a repentance without regret, leading to salvation, but the sorrow of the world produces death.
11 For behold what earnestness this very thing, this godly sorrow, has produced in you: what vindication of yourselves, what indignation, what fear, what longing, what zeal, what avenging of wrong! In everything you demonstrated yourselves to be innocent in the matter.

The passage speaks for itself - there are no two ways about it. Paul has it right on. And what also caught me was that I most probably have been having worldly sorrow more than Godly sorrow. Worldly sorrow has to do with me, me and me, and it produces death. Godly sorrow has to do with God, the sorrow we have because we know we have grieved God by the things we do. It produces a repentance without regret, leading to salvation.

I wondered about the phrase "a repentance without regret". Barnes has this to say:
There is no occasion to mourn over such repentance and change of life. It is that which the mind approves, and which it will always approve. There will be no reason for regretting it, and it will never be regretted. And it is so. Who ever yet repented of having truly repented of sin? Who is there, who has there ever been, who became a true penitent, and a true Christian, who ever regretted it? Not an individual has ever been known who regretted his having become a Christian. Not one who regretted that he had become one too soon in life, or that he had served the Lord Jesus too faithfully or too long.

He is right. There is no regret about repenting and abiding in Christ. If there is, then there is no repentance.