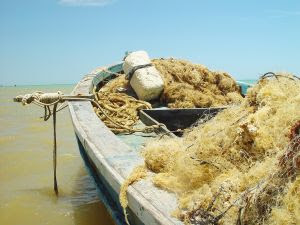 The speaker spoke on Luke 5:1-11 today. She shared with us her experience in spreading the good news bringing more people to believe in Christ. We need to be always ready to share the Word, to be disciples ourselves and to develop a compassion for others to reach out to them.

When I look at the passage, what we need to first look into is the context. If we look at the chapters preceding Luke 5, Jesus had just begun his ministry, he was teaching in synagogues. He has yet to call his 12 disciples. He was soon driven out of a synagogue in Nazareth, and he went on to Capernaum, Galilee. The people there were amazed by him, his teaching, his healing and rebuking of demons. The crowds searched for him.

Then it was at the Lake of Gennesaret that the people were pressing around him and listening to the word of God. He was by the lake and saw two boats. He got into one. It was Simon's. Jesus was at Simon's house before, healing his mother-in-law from a high fever. It was from this boat that he began to teach the crowd.

When he finished teaching, he told Simon to put out into the deeper water and let down the nets for a catch. (It will be interesting to know the geographical set out of the lake and whether Simon had to bring the boat out further or he just had to drop the nets at the other side of the boat, in the sight of the crowds.)

Then, how Simon responded is important. He first established the fact that he had already been working hard all night (so has Jesus been teaching late into the night as well?) but had not caught any fishes. Is he saying that he knew his job? Is he indicating that by that time of the day/night, there would not be any fishes? But then he said that because Jesus said so, he will do it. Simon has heard Jesus and seen what he has done and therefore there is no reason not to listen to him this time. He let down the nets and caught so many fishes that he had to get other boats to help him. We are no fishermen, but just imagine all the activities and confusion that must have taken place.

After all the fishes has been hauled on board all the boats, Simon fell down at Jesus' feet saying, "Go away from me Lord, for I am a sinful man, O Lord!" James and John were also there. Jesus said to Simon, "Do not fear, from now on you will be catching men." As a result, they left everything and followed Him.

A few points I picked up:

1. Like how Simon responded to Jesus because of what he heard what Jesus had said and seen what Jesus had done, in order for us to teach and to instruct, we must first be a good witness in what we preach - i.e. in modern cliche, we must walk the talk

2. Jesus got involved in what Simon was doing before calling him. Jesus went with them fishing. I would like to think that Jesus also helped in hauling the fishes in unlike some pictures I have seen where Jesus was seated while the rest were in hardwork. Likewise, when we want to reach out to the people, we should also get involved and work with them, i.e. be a part of their lives.

3. This passage is famous for highlighting the importance for us to be fishers of men, i.e. to go and spread the good news of the Lord so that more may believe. But notice what the immediate actions of Simon, James and John were. They left everything they had and followed him. They did not immediately became fishers of men but instead they followed and learnt from Jesus. It was not until later, in Acts that we see Simon becoming a fisher of men. In the same way, we first need to be a follower, a disciple of Christ and it does take a lot to be one. It is not so easy to just sing "I will make you fishers of men, fishers of men, fishers of men ...", is it?