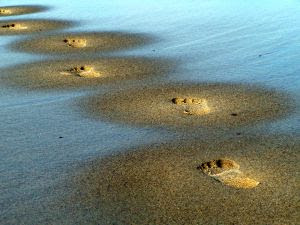 Rev Christopher Rao spoke to us from Luke 5:1-11 today about discipleship. The call to follow him, to trust him and to serve him. A sermon was preached on the same passage some weeks ago: Disciple-Fisher of Men.

Luke 5:1-11 (NASB)
1Now it happened that while the crowd was pressing around Him and listening to the word of God, He was standing by the lake of Gennesaret;
2and He saw two boats lying at the edge of the lake; but the fishermen had gotten out of them and were washing their nets.
3And He got into one of the boats, which was Simon's, and asked him to put out a little way from the land. And He sat down and began teaching the people from the boat.
4When He had finished speaking, He said to Simon, "Put out into the deep water and let down your nets for a catch."
5Simon answered and said, "Master, we worked hard all night and caught nothing, but I will do as You say and let down the nets."
6When they had done this, they enclosed a great quantity of fish, and their nets began to break;
7so they signaled to their partners in the other boat for them to come and help them. And they came and filled both of the boats, so that they began to sink.
8But when Simon Peter saw that, he fell down at Jesus' feet, saying, "Go away from me Lord, for I am a sinful man, O Lord!"
9For amazement had seized him and all his companions because of the catch of fish which they had taken;
10and so also were James and John, sons of Zebedee, who were partners with Simon. And Jesus said to Simon, "Do not fear, from now on you will be catching men."
11When they had brought their boats to land, they left everything and followed Him.

Peter was a fisherman. He is skilled and trained to fish. Peter's encounter with Jesus, whether or not personally, was when his mother-in-law was healed by Jesus of a high fever. Now he is again with Jesus as he was teaching by the lake. When it got too crowded, Jesus got into Peter's boat. After Jesus finished teaching, he asked Peter to put out his net into deep water. Peter must have thought, "what would this teacher know about fishing" but instead he obeyed, and as a result, it was a lot of hard work, commotion and a good haul of fishes that filled several boats.

Like Peter, we may think we are on familiar grounds. But when God calls us to do something we thought we knew so well not to do, by obeying, it will bring him glory. Jesus revealed to Peter who he is, as Peter opened himself to him. We too need to open our hearts to Jesus so that he will speak to us. We need to open our eyes to see and our ears to hear and our hearts to receive him.