January 18, 2008
Some interesting stuff I came across today in my blogroll:

free pdf essays from lhbots
by anthony
T & T Clark (the publishers) has a blog and for this entry below, they are offering 8free pdf files of essays from a festschrift on philip davies (OT scholar at Sheffield). download them to read because we can never afford the price of this book! (amazon.com lists the price as a whopping 70 pounds!) keep an eye of their blog for future offerings.

Kairos Public Forum: Religious Liberty Under Threat
by Kar Yong
In light of recent events in the country, the public forum organised by Kairos Research Centre is timely and pertinent. Come and be informed ... Malaysian citizens – Malaysian Christians in particular – should be greatly disturbed by recent events that give alarming evidence of the erosion of religious liberty in the country.

Language, Power and the Malaysian Christian
by BK
... During my brief time struggling with the arcane subject of postcolonial studies at university, I was for the first time really asked to consider what it meant for me, a Malaysian Chinese, to speak, write, and think in English.

A Hot Cup of 1,3,7, Trimethylxanthine
by Alex Tang
... I suspect that there is a connection between the development of books and the widespread consumption of coffee.

I also found something interesting in Google: 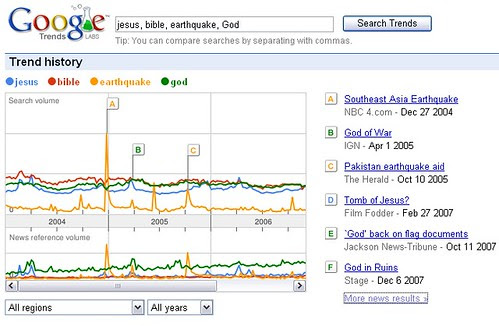 You can apparently compare the world's interest in any topics. Enter up to five topics and see how often they've been searched on Google over time, appeared in Google News stories, and in which geographic regions people have searched for them most.