Book Review: The Case for Christ 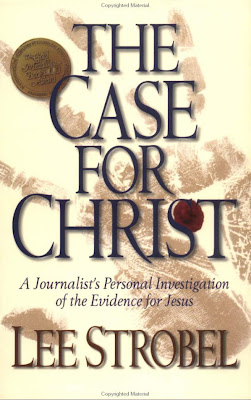 I was given this book by a very dear brother, Noel Thomas, several years ago. This book is special to me because it was a catalyst that sparked in me the desire to have my faith seek for understanding.

If memory serves me right, Noel gave me this in year 2002. It took me several starts, four if I am not wrong, before I got into the hang of it, became so engrossed and completed it in very few sittings.

Lee Strobel was an award-winning journalist at the Chicago Tribune. Being legally trained in Yale Law School, he approached the case for Christ using his legal "tools" to investigate the evidence for Christ. It started as he began in the book when his wife Leslie, became a Christian in year 1979. He was a staunch atheist and was stunned by his wife's decision. He prepared for the worst, for his wife to turn into a prudish freak but soon he saw instead the unveiling of a beautiful person from the inside - he was a witness to fundamental changes in her character, integrity and personal confidence. With that, he decided to plunge in and search for evidences in The Case for Christ.

He did it through interviews with several scholars and experts in the field. He wrote the book almost in a narrative form, recounting the interviews and that makes it an interesting read. It's as though you were in the room with him, as he reasoned through the sessions through questions and answers.

In preparation for bible study with the Youth Group tomorrow, I grabbed hold of it for another read and it has not disappointed me. I was just as engrossed as ever. Back in 2003, I was quite blown away with what I read that I vowed to myself that I will continue to read to know more about Christ. As a result I began building my own little library in the process. I had not been familiar with the scholars the first time I read it but now, several names brought me smiles, I did remember J.P Moreland and Craig Blomberg but I never realised I had read several of them in The Case for Christ before I had started accumulating their works: the late Dr Bruce Metzger, Ben Witherington III, D.A. Carson, and Gary Habermas.

Isn't it interesting that other than Lee Strobel and I, every name mentioned here in this post is a Doctor, including Noel? By the way, I remember the first book I read after The Case for Christ was J.P. Moreland's Scaling the Secular City. Now on hindsight, I must be mad to have attempted reading that one. But it was the first book from Strobel's recommended reading I saw on the bookstore shelves.