The Corinth that Paul Saw: Week 2 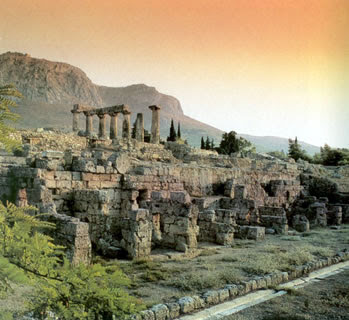 We continued with the second session on the background study for 1 & 2 Corinthians by Kar Yong in our church.

I have gained more insight into Paul's letters to the Corinthians in his usages of temple imageries, his usage of language in relation of the imperial cult as well as construction of buildings.

Temple Imageries
As mentioned last week, Corinth was a place that was full of temples. The picture above shows the elevated temple of Apollos overlooking the Acropolis. Temples were very prominent in the lives of the Corinth people. Everywhere they go, they saw temples, they smelled the aroma of temple sacrifices, they walked into temple activities. The Christians there were Gentiles and at one time of their lives, they would have had experienced temple life and worship. Paul's usage of the temple imagery was brilliant to teach them about unity as a body of Christ, purity in their way of life and their distinct identity in Christ.

Firstly, Paul used it to talk about unity, where he spent 4 long chapters doing so. He told the Corinthians that they are in fact a temple of God and the Spirit of God dwells in them. While no one thinks about destroying a temple, let alone doing it, the Corinthians are - through infighting, and divisions. Even in these days, any attempt to tear down a temple will cause anger, even violence, not only among their devotees but society in general. So, if the pagans and the world at large do not destroy their temples, why do we? Why do we cause strife and dissent among ourselves? Why do we cause divisions? Why are we dragging each other to court? Paul's words were strong: "If any man destroys the temple of God, God will destroy him, for the temple of God is holy, and that is what you are" (1 Cor 3:17). Let us heed the words of Paul and not put God to the test.

Secondly, Paul used temple imagery to talk about purity of a believer's life. There was in their midst a man who was having affair with his stepmother, something that was not even practiced by the pagans and even worse, he was proud of it. Paul's rebuke was that there were many temples in Corinth of that time, each temple to one deity - but they are not shared. You are a temple of God and God is the only God in your life - you have no place for another.

Thirdly, Paul used it in 2 Cor 6:14 - the popular verse, "do not be equally yoked with unbelievers", which is mainly used by most as a command not to marry out of the faith. While it can effected that way, it is more than that. It is a command to a way of life that must not result in the loss of our identity as the children of God. Woe be to us if we are so bound up with the life of the world that we lose our bearings and markers. Woe to us if no one recognises us as belonging to Christ anymore. What are your markers?

Imperial Cult
It has been impressed upon me the significance of (our common) phrases like Son of God, gospel or good news, Saviour and Lord. I knew that these were the titles used by Caesar but never quite in its significance. It now makes the reading of the Gospels for me so much more in context. To the first century Christian, the call that "every knee shall bow and every tongue shall confess that Jesus Christ is Lord" is cutting to the core of realigning their allegiance from the self-deified kings to the real King and Lord.

Construction Language
I am quite surprised that people in the first century had excellent building skills. Here's a collection of pictures of buildings in Ancient Corinth similar to the ones Kar Yong showed us in his slide presentation this evening. 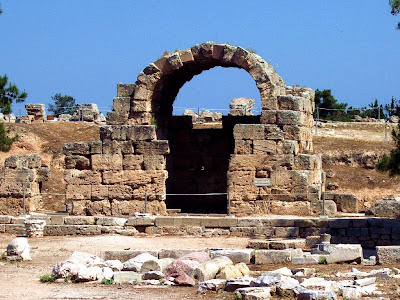 Picture from http://www.caspercomsci.com
A two-storey building. (Actually come to think of it looking at the arch doorway, I think China was similar if not far more advanced in their construction skills.) 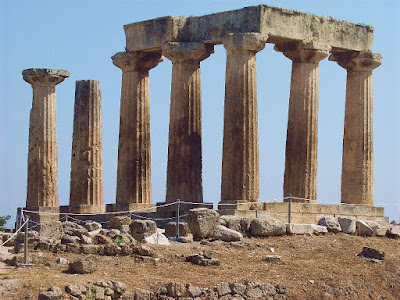 Picture from http://www.caspercomsci.com
The most prominent temple in Corinth - the Temple of Apollos. The columns are 6 feet in width and 24-foot tall. 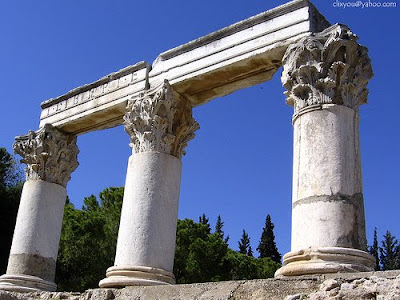 Picture from http://www.flickr.com/people/clixyou/
This is the temple dedicated to the sister of the Emperor Augustus - an obvious testimony to the imperial cult. Notice the intricate design at the head of the columns. 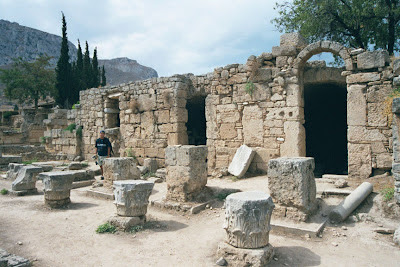 Picture from http://www.grisel.net/corinth.htm
The west-end shops.

Paul uses construction language several times in his epistles - he talk about the foundation (1 Cor 3:10-11), the cornerstone (Eph 2:20). The foundation being the most important part of a building, where the most time and effort is spent but nothing is seen. The cornerstone being the most central piece, which is the first stone set in foundation where all other stones are set in reference to, thus determining the position of the entire building.

In our drive for instant results, how much do we spend in building the foundation of our life in Christ? In our world deep in syncretism, who do we place as the cornerstone of our lives?

Crucial questions to ask of ourselves and the church at large.