The Corinth that Paul Saw: Week 5

August 22, 2008
Today is the final session of "The Corinth that Paul Saw" held in my church by Kar Yong. Two more things he brought up: Roman baths and Roman villas.

Roman Baths
I suppose it is embarassing to say that I never realise that public baths at that time were necessary things to have. I thought they were nice to go places like the spas we have these days. How wrong was I. I never realised there weren't many private bathrooms or toilets in homes in those days. If you need to go, you need to run. If you need to bathe, you'd bathe in public.

The bath in Corinth are already in ruins and Kar Yong showed us this Roman bath in Bath, England. 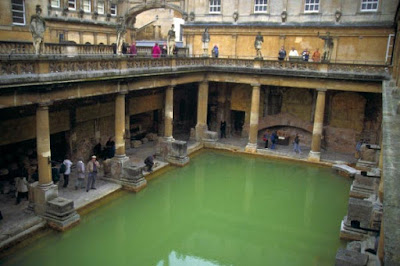 The significance of this information is quite great. The people of those days who took their baths in public, it was also a place where they socialised. And Paul having stayed in Corinth would have been to the bath as well. If we read 2 Cor 11:23 onwards, we see why it matters.

2 Corinthians 11:23-25
Are they servants of Christ? (I am out of my mind to talk like this.) I am more. I have worked much harder, been in prison more frequently, been flogged more severely, and been exposed to death again and again. Five times I received from the Jews the forty lashes minus one. Three times I was beaten with rods, once I was stoned, three times I was shipwrecked, I spent a night and a day in the open sea.

Paul's scars would be clearly seen by the people and they would recognise them as dishonourable scars, for they would have been on his back. As such when we read 2 Cor 10:10, "For some say, "His letters are weighty and forceful, but in person he is unimpressive and his speaking amounts to nothing," we may have an idea what it would have meant. Could it also imply that they did not felt Paul deserve to be their leader, and that it might point to the division of the church with some following Apollos, some Peter, some Paul and some Christ?

If the other rooms in the house are used personally by the host, the area where the people would meet during church gathering, communion and worship could have been in the atrium and the dining area. The dining room would most probably fit about 12 comfortably, and it would have been meant for the closer friends of the host, i.e. the rich. The rest of the church, the lesser, the poorer, the slaves, would gather in the atrium.

The rich having more time in their hands would most probably arrive first and gather in the dining room to eat and drink, while they wait for the working class to arrive for service. Communion at that time are held like a regular meal, and if you notice where the kitchen is, wouldn't it mean food would have been paraded on its way to the dining area, first food meant only for the richer and later scraps for the poorer?

With this in mind, try reading what Paul said to the Corinthians:

1 Corinthians 11:18-22, 27-29
18 In the first place, I hear that when you come together as a church, there are divisions among you, and to some extent I believe it. 19 No doubt there have to be differences among you to show which of you have God's approval. 20 When you come together, it is not the Lord's Supper you eat, 21 for as you eat, each of you goes ahead without waiting for anybody else. One remains hungry, another gets drunk. 22 Don't you have homes to eat and drink in? Or do you despise the church of God and humiliate those who have nothing? What shall I say to you? Shall I praise you for this? Certainly not! ... 27 Therefore, whoever eats the bread or drinks the cup of the Lord in an unworthy manner will be guilty of sinning against the body and blood of the Lord. 28 A man ought to examine himself before he eats of the bread and drinks of the cup. 29 For anyone who eats and drinks without recognizing the body of the Lord eats and drinks judgment on himself.

In application, we may not be so blatant or obtuse as to have different classes of food for different people in the church, but do we somehow or rather still have other kinds of segregation, whether in thought, word or deed?