August 06, 2008
It has been awhile since I fell sick, and I fell pretty sick. Cough, cold, fever, sorethroat, running nose, the whole works.

I was given 2 days off. And what have I been doing?

One, I was working, still.
Two, I did a bit of my psalm assignments.
Three, I while it away watching episodes of Star Trek Voyager.
Four, I sleep in between here and there when the cough mixture I ingest takes its effect on me.

SH was the one who got me into the Star Trek craze. I started watching Star Trek, The Next Generation back in the 1990s. My favourite character is Data. 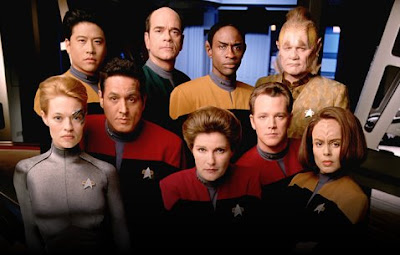 When Star Trek Voyager started its seasons in the late 1990s, I was practically hooked. It is my all-time favourite TV series, even to this date - nothing has topped that yet for me. And my favourite characters are The Doctor and Seven of Nine.

To my delight, I managed to get hold of the Star Trek Voyager box set recently. The only problem I had with it was that the moment I sit down and start watching, I could not stop. I will watch the episodes one after another until I start nodding my head in sheer sleepiness.