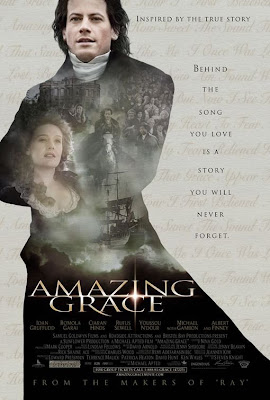 I finally watched "Amazing Grace", the moving account of the life of William Wilberforce (1759-1833). He was a British politician, a philanthropist and a leader of the movement to abolish the slave trade.

Wilberforce was elected Member of Parliament in 1780 at the age of twenty-one. He was converted and became an Evangelical Christian in 1785. In 1787, he met Thomas Clarkson and a group of anti-slave-trade activists. He became committed to the cause and began his work to abolish slave trade. He obviously ran into opposition in parliament, those with interests in business and trading. It took a lot of hard work and many long years and the Slave Trade Act finally received the Royal Assent on 25 March 1807.

The scene that moved me most was when a ship filled with tourists on a cruise was unwittingly steered near a slave ship and William Wilberforce appeared on the ship saying:

"Ladies and gentlemen, this is a slave ship. The Madagascar. It has just returned from the Indies where it delivered 200 men, women and children to Jamaica. When it left Africa, there were 600 on board. The rest died of disease or despair. That smell is the smell of death. Slow, painful death. Breathe it in. Breathe it deeply. Take those handkerchiefs away from your noses! There now. Remember that smell. Remember the Madagascar. Remember that God made men equal."

The movie did wonderfully well in telling the story, in educating our dull historically-immune minds. It had me laughing and it ended me crying.