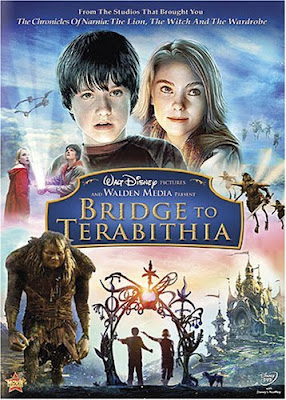 I can't believe I am actually blogging about movies three days in a row! The thing is, I am an outright couch potato this weekend. I caught several more movies on TV and this one might be worth a mention, though it did depress me quite a bit: Bridge to Terabithia.

It was interesting to find out that the movie was an adaptation of a book of the same title by Katherine Patterson, published in 1977 by HarperCollins. She drew inspiration from a real event when her son's friend was struck by lightning and died.

The story was about Jess, a fifth grader who befriended his new neighbour, Leslie. He loves to draw while she was gifted with an amazing imagination. The two children grew in their friendship while they created an imaginary kingdom in the woods near their homes. Here is where the story would remind us of C.S. Lewis's stories in the Chronicles of Narnia. As the story developed on, Leslie died in an accident, and Jess was left to face his grief, and guilt as well.

The novel apparently was the frequent target of censors and appears at number nine on the American Library Association list of the 100 Most Frequently Challenged Books for the decade 1990-2000. The censor attempt stems from death being a part of the plot, secular humanism, New Age religions, occultism, Satanism, amongst others. (source: wikipedia.org)

I have not read the book but I think the movie may be a bit watered down in comparison but there is that death, as well as a scene where Leslie questioned the truth of the Bible and Jess's little sister giving a warped version of what Biblical truth is.

Well, not a movie I want to watch again nor a book I want to read, unless it is for critique's sake.