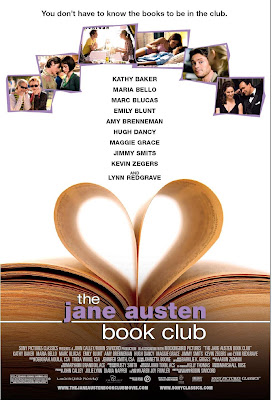 It is a long weekend and I had not planned it well. I just did what I found myself doing -- if that make any sense. And I caught this movie, The Jane Austen Book Club, on TV. I have seen the book in the store several times but did not get it.

The book club was started by Bernadette, who was fiftysomething and a six-time divorcée. It happened when she mets Prudie, a prim, married high school French teacher in her mid-20s, at a Jane Austen film festival. Her concept is to have six members discuss all of Austen's six novels, with each member hosting the group once a month. The group consisted of 5 women and a guy: Bernadette, Prudie, Sylvia, a fortysomething housewife who recently has separated from her philandering lawyer husband Daniel after more than two decades of marriage; Allegra, Sylvia's 20-year-old lesbian daughter, Jocelyn, a happily unmarried control freak and breeder of Rhodesian Ridgebacks who has been Sylvia's friend since childhood, and Grigg, the only guy, a science fiction fan who's roped into the group by Jocelyn with the hope he and Sylvia will prove to be a compatible match.

It was interesting to watch them live their lives and how similar they were to Austen's characters in their reaction to their life events.

However, I read somewhere that "the screenplay is for the most part a dramatic departure from the novel". So, it looks like I have to go get the book after all. Or worse still, I'd need to first read all six of Austen's book -- I have them somewhere in the house ...