Getting out of Sitiawan

July 19, 2009
It does not help that I cannot sing and shoot at the same time as I busied myself in the morning in the church's two services with my camera resting snugly in my bag.

The worshippers in Chin Hock Chinese Methodist Church are large in numbers. The first service is held in Mandarin, mainly attended by the younger generation and the second in the Foo Chow dialect, mainly attended by the older generation. I only know a little Mandarin, and this was the first time I actually heard Foo Chow being spoken at length. It is a very interesting dialect.

Soon we were checked out of the hotel and each went our own way back home to KL.

We kind of got lost on our way back. We did not realise we had made a right turn into Sitiawan, and as a result we missed that turn on the way back. We were soon headed down south on the coastal road, not the North-South highway.

There were 3 options: (1) turn back, but we were already about an hour on our way and that is not an option, (2) use the coastal road, but the traffic was heavy and we will have to go through Klang to get back to KL, which was not an interesting option to me since Klang is "further" than KL (we were later told we could actually by-pass Klang) and (3) make a left turn and head to Tanjung Malim to get back into the North-South Highway.

We took the third option -- whether or not we made the right choice does not matter because we had quite an adventure.

The road that we took to get to Tanjung Malim was one interesting one. I fished out out camera too late -- I was driving and was a tad too worried -- but the 76 kilometers which we had to drive to get there was an experience.

First, there were the sawah padi (rice fields), on the left and on the right. I missed a photo opportunity there.

Then, it was the forest, with the bumpiest road ever. It was when my nerves settled down that I asked Alicia, my "co-pilot", to fish out my camera and start shooting. It was really a very narrow road with almost no traffic. 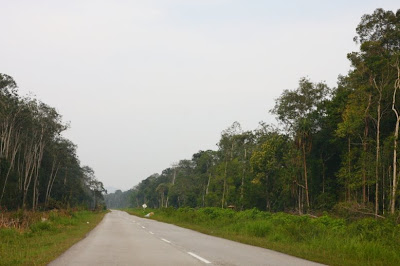 Then, the palm tree plantations. 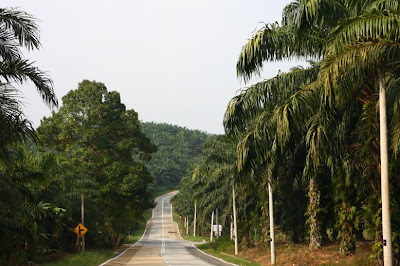 Then, it was almost a mountainous road. (This route also connects to Kuala Kubu Bahru, which is why.) 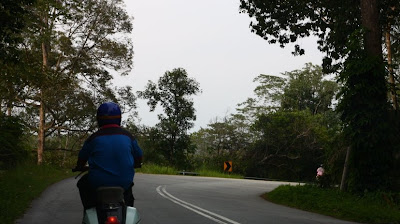 Those are all the photos we managed as we got out of Sitiawan.