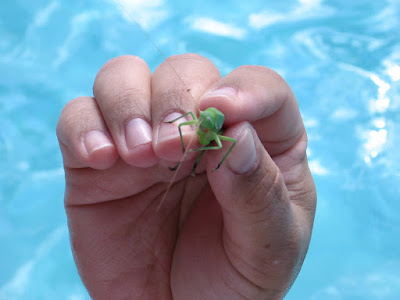 I was reading Deuteronomy in my daily bible reading and remembered this account in the book of Numbers, where God told Moses to send out men to explore the land of Canaan, which He is giving to the Israelites. I do wonder why God did what He did because 10 out of the 12 men came back in jitters.

Numbers 13 (NLT)
The Lord now said to Moses, “Send out men to explore the land of Canaan, the land I am giving to the Israelites. Send one leader from each of the twelve ancestral tribes.” So Moses did as the Lord commanded him. He sent out twelve men, all tribal leaders of Israel, from their camp in the wilderness of Paran. These were the tribes and the names of their leaders:

These are the names of the men Moses sent out to explore the land. (Moses called Hoshea son of Nun by the name Joshua.)

Moses gave the men these instructions as he sent them out to explore the land: “Go north through the Negev into the hill country. See what the land is like, and find out whether the people living there are strong or weak, few or many. See what kind of land they live in. Is it good or bad? Do their towns have walls, or are they unprotected like open camps? Is the soil fertile or poor? Are there many trees? Do your best to bring back samples of the crops you see.” (It happened to be the season for harvesting the first ripe grapes.)

So they went up and explored the land from the wilderness of Zin as far as Rehob, near Lebo-hamath. Going north, they passed through the Negev and arrived at Hebron, where Ahiman, Sheshai, and Talmai—all descendants of Anak—lived. (The ancient town of Hebron was founded seven years before the Egyptian city of Zoan.) When they came to the valley of Eshcol, they cut down a branch with a single cluster of grapes so large that it took two of them to carry it on a pole between them! They also brought back samples of the pomegranates and figs. That place was called the valley of Eshcol (which means “cluster”), because of the cluster of grapes the Israelite men cut there.

The Scouting Report
After exploring the land for forty days, the men returned to Moses, Aaron, and the whole community of Israel at Kadesh in the wilderness of Paran. They reported to the whole community what they had seen and showed them the fruit they had taken from the land. This was their report to Moses: “We entered the land you sent us to explore, and it is indeed a bountiful country—a land flowing with milk and honey. Here is the kind of fruit it produces. But the people living there are powerful, and their towns are large and fortified. We even saw giants there, the descendants of Anak! The Amalekites live in the Negev, and the Hittites, Jebusites, and Amorites live in the hill country. The Canaanites live along the coast of the Mediterranean Sea and along the Jordan Valley.”

But Caleb tried to quiet the people as they stood before Moses. “Let’s go at once to take the land,” he said. “We can certainly conquer it!”

But the other men who had explored the land with him disagreed. “We can’t go up against them! They are stronger than we are!” So they spread this bad report about the land among the Israelites: “The land we traveled through and explored will devour anyone who goes to live there. All the people we saw were huge. We even saw giants there, the descendants of Anak. Next to them we felt like grasshoppers, and that’s what they thought, too!”

We, on this side of time, reading Numbers 13 would automatically look down on the cowardice of the 10 and commend the strength and faith of Caleb and Joshua. But I am thinking if I were in their shoes, I may end up feeling like a grasshopper too.

I don't feel very strong or confident most of the time in what I do. I usually tread carefully and mindfully ensuring that I have taken as much as I can into account before I act or make any decisions. So if you were to put me in the same position as the tribe leaders, I would have freaked out as well because of the apparent sheer strength of the people there.

In the same way, how often have we forgotten the omnipotence of God? How often have we felt so small in situations that we are placed in that we cower in fear? I grant that God sometimes places us in difficult situations to mature and build up our faith, but He does not do it beyond what we can bear (1 Cor 10:13) and so we can be rest-assured that we will be safe in His hands. Whatever happens, we are safe in the refuge of the shadow of His wing (Psa 57:1).

We are no grasshoppers!

We are a chosen generation, a royal priesthood, a holy nation, a people belonging to God, and whatever happens, we are to declare the praises of Him who called us out of darkness into His wonderful light (1 Pet 2:9).