The Language of Adoption 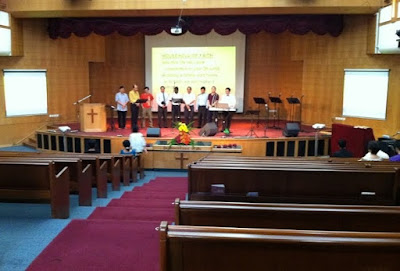 I attended Pantai Baptist Church today. I have a friend who goes there and I have been there several times, though not for Sunday service, and thought I'd go and take a look.

Today's sermon was on Galatians 3:23-4:7. It was packed with substance I must say, which it should be, given that the text is from Galatians. The one thing that struck me was the speaker's treatment on our adoption as sons of God. I have never thought much about the concept of adoption as God's son. I have had just taken it as it is, adoption. The speaker however, brought me to a new outlook when he shared about the life of a North Korean girl named Hyun Sook* who was adopted by a family in Atlanta. He said that as an adopted child, you would never have thought that you would be loved by someone. And that struck me.

Not being adopted, I fully know and experience love in my family, in whatever state I am. Hence, the language of adoption does not strike much of an emotion in me to fully understand the significance of being adopted. My thoughts were more in the area of I, being a creation of God, am therefore his child, period. Of course I know that it is because of my rebellion that I am disconnected from God and now by his grace, I am adopted as His son, with full claim to the inheritance that is in Jesus Christ. It is just that it has not dawned upon me the colour and depth of the reality of being adopted as a son of God.

Therefore, with this realisation that I have not experience being adopted, how should I come to understand the full significance of being adopted as a son of God?

I need to re-read Galatians and the passages on adoption.

* I have not seen this video yet but this was the story that was shared with us this morning.
at June 19, 2011