I was having breakfast with my son this morning in the mall when I got distracted by all the noise around me. I was reading a book and I so wished there were quiet corners reserved just for those who'd appreciate a quiet meal but nope, my desire for tranquility was beleaguered by screams, loud chatters and guffaws as wells as shouts of anger of a mother to her poor daughter. I don't blame them for the cacophony. It's a public place after all.

I remembered then that I have just downloaded an app in to my iPhone, Cello Classic. I popped on my earphones and started listening to it. The problem that arose next was that I could not continue reading. I was totally mesmerized by what I heard. It was Bach's Suites for Solo Cello No.1 Prelude. It was so beautiful. I tried to go back to reading, but it was a lost cause. I closed the book and closed my eyes to just listen. I was thinking that if I were in a concert hall listening to that, the surroundings, the sound, the acoustics, the emotions would be enough to make me weep.

It was then that I remembered coming across this book that I have put in my wish list. 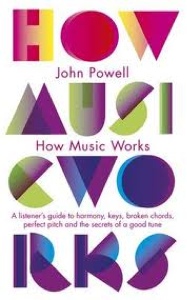 How Music Work by John Powell
A listener's guide to harmony, keys, broken chords, perfect pitch and the secrets of a good tune.

When I found it Amazon.com though, the subtitle that got me attracted was different: The Science and Psychology of Beautiful Sounds, from Beethovan to the Beatles and Beyond. I wanted to know what made me feel like weeping when I listened to Bach in MacDonald's.

I checked and confirmed that both books are the same one, and bought an electronic copy. It was such an interesting read that I finished it in a day, and I have never had so much fun reading a book in a long, long time.

For one, the writer knows his stuff, and he writes with humour, though I feel some of it is kinda corny but found it so hilarious that he referred to Beethovan's Fifth Symphony as "the one which goes Da Da Da Daah! Da Da Da Daah!".

I followed his advice in reading the book with access to YouTube. I had my iPhone fitted with my X-Mini speaker and listened to the examples he quoted. I found some of the most amazing music ever written, even one piano piece that was named The Devil's Staircase written by György Ligeti that was quoted as an example of what he called "really anxious chords". It is not an easy piece to take in but it is definitely a piece to behold.

I am not really a musician, though I do know some basics after attempting to study the piano for several years in my younger days. The thing is I learnt quite a lot of things reading this book. I just found out you can actually play Amazing Grace by just using the black keys on a piano. Never knew that. And now I know how those 12 notes in a harmonic scale came about. And I learnt what London and the year 1939 and perfect pitch have to do with each other.

Today is a good book day.

I, a reluctant housekeeper

My library has been "inaccessible" for awhile. What I mean by inaccessible is this: I am a reluctant-housekeeper, I simply feel that it takes too much time and that I do not have enough of. But I am not proud of it.

I do housework, major ones, on a project basis. Some time ago, I embarked on a Project Clean-Up Cluttered Bedroom. The result was a messed up library. This was because all the things I cleared from my bedroom went to the library, which was just outside my room. And I just left those things stay there, for quite awhile. I wasn't motivated to clear it.

This was followed by Project Clear-Up-the-Store. For people like me, the cluttered up folk, having a storeroom is a bad idea. Everything not required for the moment goes in there. One fine day, I gathered all the resolve I could muster and started to clear it. It took me several long days. I even ended up buying a paper shredder to dispose of documents like bank statements that I cannot simply bundle up and throw.

And finally it was Project Get-My-Library-Back-In-Place. The motivation that got me to it was a visit from a good friend. She had to fly over from Kota Kinabalu and I offered her to bunk in my place. As much as she did not mind whatever condition my pad is in, I do mind. When it comes to visitors, though rare, it matters.

So it has been for the last few days, every time I go up to my room, I can't help it but stop for a moment for savor the glorious view and take it the sweet aroma of my library. It is back in business.