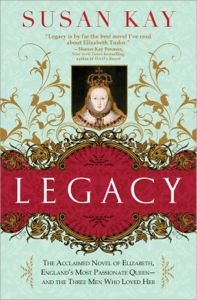 Legacy
The Acclaimed Novel of Elizabeth, England's Most Passionate Queen -- and the Three Men Who Loved Her
By Susan Kay

I finally finished this book. It is good but not an easy read. I tend to keep referring to Wikipedia to check the facts as well as to figure out who's who. The author has the habit of changing the characters' names and reference fluidly. For example, Robin Dudley, which she refers to as Dudley from the start suddenly became Leicester at the same breath, after he was made Earl of Leicester.

But all in all, it is good. It is fascinating to read of whom historians regarded as England's greatest monarch. I know that this book is considered fiction albeit historical, in that other than the known facts, the rest are all made up. I am not sure if the book's portrayal of the queen's personality and character is accurate. If it is, she would then be quite an amazing person, cool and calculated, sometimes with empathy and yet most times ruthless and cold.
pearlie