Showing posts from April, 2013
Show All

An incubation and a meal

April 18, 2013
I am onto the last portion of the book of Genesis as I read R. Kent Hughes book on it. It felt like I was moving into the excitement that you get when you come to the closing of a historical saga. I did say that I can only take a chapter of Hughes' book a day, since every chapter is like a sermon with insights into the given passage and life application points. But today, I read six chapters at one go! It was like, "What next? What next?" And Hughes certainly has many great insights in this most favourite historical account of mine. There is no doubt that I have learnt so many lessons today, but two of them have left a stronger imprint in my mind. First is a statement that he quoted from John Walton's Genesis, NIV Application Commentary . It refers to the time when Jacob and his entire household was to move into Egypt in order to survive the great famine, and I quote, "the time in Egypt is not an interruption of the covenant but an incubation of the covenan
5 comments
Read more

I am an Esau too?

April 11, 2013
I am getting along pretty well with Kent Hughes' Genesis, Beginning and Blessing and finally met Esau for all that he was. Just like Lot , I never identified with Esau until now. Here is what Hughes said: Esau despised his birthright. He was no villain, but he was young, attractive with an unbridled nature. He was spontaneous, extroverted, impulsive outdoorsman - a good guy, as we say. A prince of men, prime favourite both with men, and women, and children, with a good word and a good gift from the field for them all. But the tragedy was, that was just about the sum total of who the man was. He was a man of the present and cared not at all about the covenant's future promises of Canaan and a multitude of descendants. What good were they in the present? Even the firstborn entitlement to a double portion of the inheritance meant nothing now. But he did become a good man after a 20-year hiatus and received Jacob with much grace. So how are we like Esau? Do Christian things m
3 comments
Read more 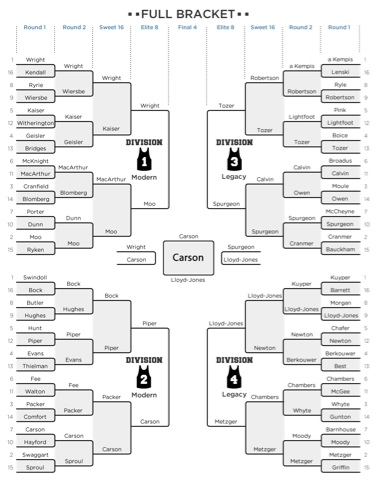 Logos.com just had a March Madness tournament of your favourite author and this was how it fared, with DA Carson emerging the "winner". As such, a selection of his books are with a 75% discount, which is really a very good deal. Check it out here as well as the discounts available for the other authors. http://www.logosmarchmadness.com/ pearlie
2 comments
Read more
More posts