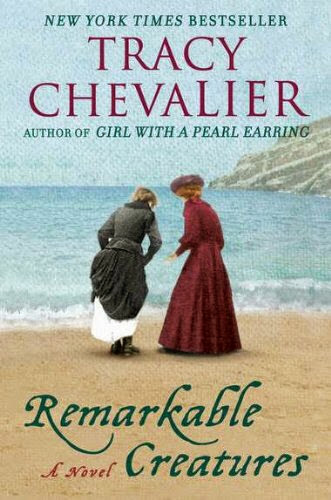 Having already read two of Tracy Chevalier's books and loving them, I was looking forward to read this one, and I was not disappointed.

I did not realise however that the book is based on a real person, Mary Anning, as I have not heard of her before. I only found out when I read more than 80% of the book. Now I'm glad I have read of her, albeit historical fiction.

Mary Anning was indeed an amazing person, for a woman in the 19th century. According to Wikipedia, "Mary Anning (21 May 1799 – 9 March 1847) was a British fossil collector, dealer, and palaeontologist who became known around the world for important finds she made in the Jurassic marine fossil beds at Lyme Regis in Dorset, a county in Southwest England on the coast of the English Channel, where she lived. Her work contributed to fundamental changes that occurred during her lifetime in scientific thinking about prehistoric life and the history of the Earth."

Chevalier painted her as a simple but inquisitive girl who became an ambitious woman in her entrepreneurship and contribution to the world of prehistoric science when women were then considered as "spare part"!

On the part when a Lord Henley was chided for putting his name as the discoverer of a complete fossil specimen instead of Anning's as it was she who found it, he said:

“Mary Anning is a worker. She found the crocodile on my land-Church Cliffs are part of my property, you know. Do you think these men-” he nodded at the men shifting mud “-do they own what is on this land simply because they dig it up? Of course not! It belongs to me. Besides which, Mary Anning is a female. She is a spare part. I have to represent her, as indeed I do many Lyme residents who cannot represent themselves.”

It is indeed frustrating to read how women were regarded back in those days and I am thankful we are who we are today and regarded as equals.

The book presents the narrative with the relationship of two women, Mary Anning and Elizabeth Philpot, who was also obsessed with fossils. It tells of their unexpected friendship and relationship that grew in spite of their differences all because they were both drawn to the allure of finding skeletons and remains of remarkable creatures.

Chevalier's portrayal of Mary Anning is quite uncanny though for me because her voice really reminds me of a friend that I have. They sound so alike that I got chills reading the Mary chapters (the book has alternate chapters between Mary and Elizabeth being the first person). And on top of that, (spoiler alert) the part where they fought and had a major fall out also reminds me of my fall out with the same person, although of course it is not exactly the same. It's just quite eerie.

I now look forward to getting and reading her other books: Falling Angels, The Lady and the Unicorn, Burning Bright, and her latest The Last Runaway.