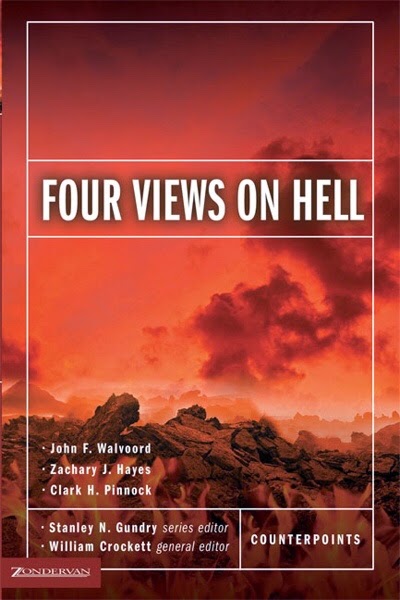 Before reading this book, my view on hell was the metaphorical one, which turns out to be the majority view of the Evangelicals. I find that I could not take the literal view, the traditional one, because I can't see how a God of love would allow his creation, even if they have rejected him, to suffer in literal fire for eternity. Being Evangelical, I do not see how it can be purgatorial since the bible does not mention it and I'm not yet exposed to the conditional or annihilation view.

After reading the book, I'm still not with the literal view. I will still hold (though now not so firmly) to the metaphorical view. I'm now thinking about the conditional one with an interest in the purgatorial.

Whether I'm more informed or more confused, I'm not sure!

I find that Walvoord did not do much with the verses other than just quoting them--I suppose that is him being "literal". And as for Crockett, he did not give much on what the nature of hell is, which I can understand because it really depends on one's interpretation on the verses metaphorically and with that, what Pinnock say is true: "If we do not know the nature of hell, then any position might turn out to be true," and that would include the literal position.

Hayes' view on purgatorial is interesting as I was thinking, before reading the book, if God will allow for an intermediary period after the death of an unbeliever if he really, really would reject Christ. But of course, logically speaking, you could say that our time in this life is that intermediary period, and if another is given, how many is enough? However, Hayes focused more on the perfection and sanctification of a believer in purgatory who is not good enough to be in heaven. But to me, that reduces the power and effect of the work of Christ on the cross.

Pinnock's case to me was the most convincing one. He is against the metaphorical view because that is like taking the hell out of hell. He is against the literal view with the same reason I do. What I find interesting is his point on the default understanding of the immortality of the soul which is according to him is Hellenistic in nature. He disagrees saying that the soul is not automatically immortal until the resurrection on the last day through Christ. Souls who reject God will not be resurrected but annihilated. He gave verses in Scripture which do provide support to annihilation. Like in Psalm 37, "the wicked will fade like the grass and wither like the herb (v. 2), that they will be cut off and be no more (vv. 9-10), that they will perish and vanish like smoke (v. 20), and that they will be altogether destroyed (v. 38)...God would destroy the wicked (1 Cor. 3:17; Phil. 1:28)...Their destiny is destruction (Phil. 3:19)."

I'm not yet switching to the conditional view as I need more study on it. I have questions like, if you can't take hell out of hell, how long will they have to suffer the torment before they are annihilated? And wouldn't annihilation a way of taking hell out of hell too?

It's tough but I still hold on to the immortality of souls and yet do not accept that God will perpetually torment people with conscious suffering for all eternity. But I do see that one can hold on to the annihilist position and still be faithful to Scripture.

I'm not sure if I want to be sure about my position. Can I not leave it till I get there (not hell but heaven!)? Or does the position I hold have any bearings on how I live my life in Christ now?