We are not residents but pilgrims

Ortlund completes the third section on "The Supremacy of God Over the Nations" on Isaiah 24:1-27:13, where he pointed out that "Isaiah is concluding another major section in his book. Chapters 1-12 reveal God’s saving purpose for Judah and Israel. Chapters 13-27 reveal his saving purpose for the whole world." 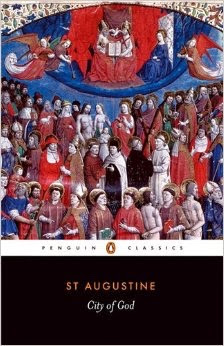 City of God
by Saint Augustine

And here is where he referred to Augustine's work on the City of God, where there are two groups of people, or two cities. One is the city of man, a city against God and the second is the city of God. The former will fall, without a doubt, the latter will last forever.

Augustine said, "Two cities have been formed by two loves: the earthly by the love of self, even to the contempt of God; the heavenly by the love of God, even to the contempt of self. The former, in a word, glories in itself, the latter in the Lord. For the one seeks glory from men; but the greater glory of the other is God, the witness of conscience. The one lifts up its head in its own glory; the other says to its God, “You are my glory, and the lifter up of my head.”"

Aa such, Ortlund concluded in this chapter to "stop living like a resident, and learn what it means to live like a pilgrim."

I have purchased Augustine's City of God a long time ago but have not found the time to read it. It's time I did, though it will be a big challenge--the book is a huge tome and it will take me a long, long time to finish it but I think it will be worth an attempt.