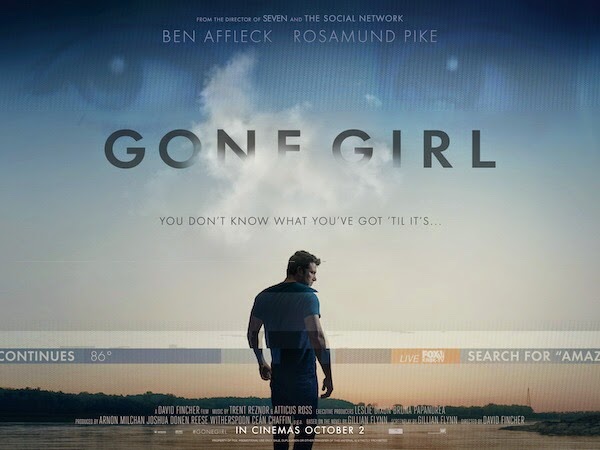 I don't usually give away any spoilers when I blog about movies, but you might want to watch this movie first before you read this. Not that I talk much about the plot but for a psychological thriller, the less you know about it before you watch it, the better. So if you have not, skip the next two paragraphs and go to the last.

This is one movie I could not stop thinking about after watching it. It's like I'm obsessed about it. The main reason, I think, is because there is no closure to the movie at all, but the movie is so good. I'm highly likely to get the book and read it so I can get a fuller feel of the story - though I'm not sure if I should do that, because the story is pretty dark.

It's about a husband whose wife disappeared on the day of their fifth wedding anniversary. The movie unfolded along in the events after that, and soon he was accused of murder. But midway through, I could already guess who and what, but how it went further was quite crazy - the crazy but amazing mind of a psychopath.

And the acting was superb, both Ben Affleck and especially Rosamund Pike. The dialogue was fantastic. Kudos to Gillian Flynn, also the author of the book. I recommend this highly but be prepared for some gruesome scenes.