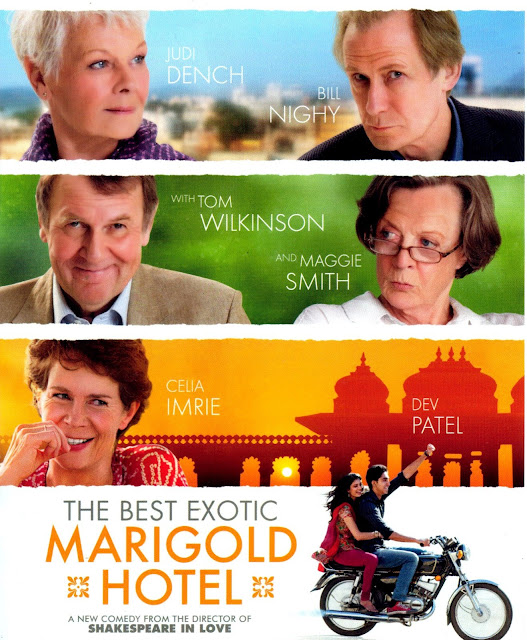 I have been wanting to watch this movie for the longest time, and I manage to do so today and it was a great one.

It has two of my favorite actresses in it, Judi Dench and Maggie Smith. And if Helen Mirren were in it as well, it would have been perfect.

It is about several retirees who decided, based on what was promised online, to spend their retirement fund in a hotel in India that promised to cater to their needs. But when they arrived, they saw the promises dashed.

But this saying was there throughout the entire movie - Everything will be all right in the end; if it's not all right then it's not yet the end.

Their stories and especially the dialogue were just hilarious. It's not funny funny but serious funny. It's British humour.

Here's some of my favourite unforgettable dialogue:

Evelyn: Yes, it is builder's tea. We dunk biscuits into it.
Sunaina's Brother: Dunk?
Evelyn: Means lowering the biscuit into the tea and letting it soak in there and trying to calculate the exact moment before the biscuit dissolves, when you whip it up into your mouth and enjoy the blissful union of biscuits and tea combined. It's more relaxing than it sounds.

Evelyn: [about their new environment] Initially you're overwhelmed. But gradually you realize it's like a wave. Resist, and you'll be knocked over. Dive into it, and you'll swim out the other side.

Evelyn: Nothing here has worked out quite as I expected.
Muriel: Most things don't. But sometimes what happens instead is the good stuff.

All the characters were very well played. Bill Nighy and Tom Wilkinson were fabulous in their roles. As much as I could not stand Celia Imrie in Nanny McPhee, she is quite a delight here. It's Penelope Wilton's role played so well that I could not stand her here.

Shan't have any spoilers here, go watch it!