My day in relativity

I do not encounter this event or occasion often, especially not for the last five years. When the occasion did come and I was suddenly presented with some numbers, I didn't quite know what to make of it.

Is it substantial? Is it good? I don't know for sure.

As such, it is a good thing that I'm reminded of what I read in Dan Ariely's Predictably Irrational back in 2010. 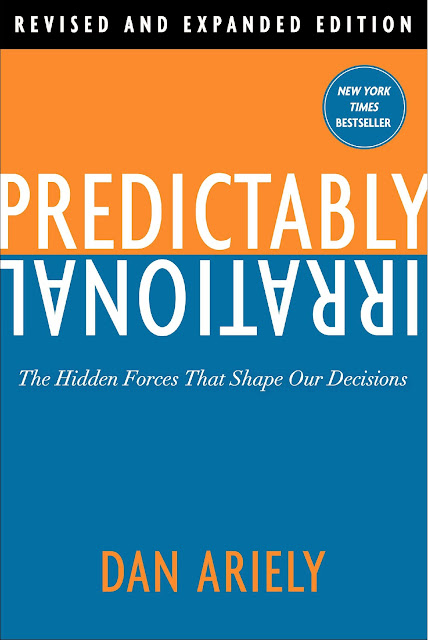 I did not do a review of this book having read it during my "lesser days" in blogging, but right here right now, it would be timely to post what Ariely himself posted in his blog. (I hope it ok for me to reproduce it here though.)

It's a brilliant chapter. It's a brilliant book. And I'm a fan of the Economist magazine. I was subscribing it for more than 10 years since 1991 until I found it really too expensive to continue.

After re-reading the excerpt below, I felt much better in still not having a clearer context of my current situation. And I guess I will never really know for sure if it is good or not since I have nothing to compare it with.

Take a read below and let me know what you think.

The Truth About Relativity
Source: DanAriely.com

One day while browsing the World Wide Web (obviously for work-not just wasting time), I stumbled on the following ad, on the Web site of a magazine, the Economist. 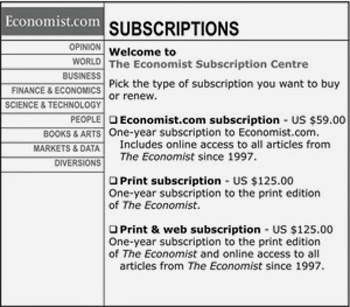 I read these offers one at a time. The first offer-the Internet subscription for $59 seemed reasonable. The second option-the $125 print subscription-seemed a bit expensive, but still reasonable.

But then I read the third option: a print and Internet subscription for $125. I read it twice before my eye ran back to the previous options. Who would want to buy the print option alone, I wondered, when both the Internet and the print subscriptions were offered for the same price? Now, the print- only option may have been a typographical error, but I suspect that the clever people at the Economist‘s London offices (and they are clever-and quite mischievous in a British sort of way) were actually manipulating me. I am pretty certain that they wanted me to skip the Internet- only option (which they assumed would be my choice, since I was reading the advertisement on the Web) and jump to the more expensive option: Internet and print.

But how could they manipulate me? I suspect it’s because the Economist‘s marketing wizards (and I could just picture them in their school ties and blazers) knew something important about human behavior: humans rarely choose things in absolute terms. We don’t have an internal value meter that tells us how much things are worth. Rather, we focus on the relative advantage of one thing over another, and estimate value accordingly. (For instance, we don’t know how much a six- cylinder car is worth, but we can assume it’s more expensive than the four- cylinder model.)

In the case of the Economist, I may not have known whether the Internet- only subscription at $59 was a better deal than the print- only option at $125. But I certainly knew that the print and-Internet option for $125 was better than the print- only option at $125. In fact, you could reasonably deduce that in the combination package, the Internet subscription is free! “It’s a bloody steal-go for it, governor!” I could almost hear them shout from the riverbanks of the Thames. And I have to admit; if I had been inclined to subscribe I probably would have taken the package deal myself. (Later, when I tested the offer on a large number of participants, the vast majority preferred the Internet- and- print deal.)

So what was going on here? Let me start with a fundamental observation: most people don’t know what they want unless they see it in context. We don’t know what kind of racing bike we want-until we see a champ in the Tour de France ratcheting the gears on a particular model. We don’t know what kind of speaker system we like-until we hear a set of speakers that sounds better than the previous one. We don’t even know what we want to do with our lives-until we find a relative or a friend who is doing just what we think we should be doing. Everything is relative, and that’s the point. Like an airplane pi lot landing in the dark, we want runway lights on either side of us, guiding us to the place where we can touch down our wheels.

In the case of the Economist, the decision between the Internet only and print- only options would take a bit of thinking. Thinking is difficult and sometimes unpleasant. So the Economist’s marketers offered us a no-brainer: relative to the print-only option, the print-and-Internet option looks clearly superior.