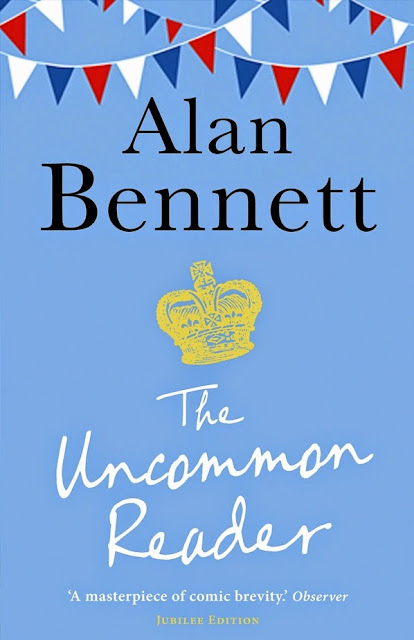 The Uncommon Reader
by Alan Bennett

I woke up in the middle of the night and could not get back to sleep. And so I decided to continue reading and finished the last two chapters of The Mind at Night. I wasn't feeling any sleepier and thought I'd start another one and decided on The Uncommon Reader by Alan Bennett.

I found out about this book when I was reading the delightful Mrs Queen Takes the Train by William Kuhn, where the Queen was discussing the book with the people she met in the train.

I found out that the title was the author's play of words in three ways. It's in contrast with the "common reader" referring to a person who reads for pleasure as opposed to a critic, or a set text that everyone reads in a group. But the significance is in its contrast between a commoner and Her Royal Highness the Queen, the Uncommon Reader.

I was delighted when I found that out, since I love reading (if you don't know that already!) and I am recently quite intrigued with the British monarchy.

The story began when the Queen stopped by the kitchen area in the palace when the dogs were making too much noise and it turned out that the mobile library had stopped by. Out of courtesy she got herself a book and from there, the Queen began seriously reading, and the book become more and more amusing as it went along.

The Duke, the household staff and especially her private secretary weren't too pleased with the new development, when she kept burying her nose in a book all the time. And I thought this too funny, from a non-reader to an avid reader:

‘To read is to withdraw. To make oneself unavailable. One would feel easier about it’, said Sir Kevin, ‘if the pursuit itself were less … selfish.’

Anyway, I managed to get back to sleep midway (and ended up with another vivid but disgusting dream, but that's another story) but since it's a 100 over-page novella, I finished it in the same afternoon.