My nagging thoughts on the existence of God 1

As much as I am holding fast to my faith in God and Jesus as my Lord and Saviour, I began to have nagging thoughts about the existence of God for quite some time now, as a result of all the science fiction and movies I have been watching over the years.

My thoughts are somewhat circling around two areas, which I can't just simply explain. It's all still a jumble of thoughts in my mind that when I read about God, especially when I am doing my (almost) daily morning devotion--currently on the book of Isaiah--I keep asking, "Is this really who God is?" "Is there a God in the first place?" "What if this is all there is to life?"

The two areas are connected to the ideas I got from science fiction. The first one comes from the Star Trek series. There are many episodes where the crew finds civilizations with their own spiritual inclinations, with a particular set of beliefs, and a god they worship. Every one of these gods in these episodes will then be reduced by the crew to nothing but science or myths. With that, I can see that my belief is seen to be stupid and childish.

The second one come from the Men in Black movie, where a cat called Orion wears a collar round its neck, on which hangs a small sphere that holds the Arquillian Galaxy within. It is as small as a marble but contains billions of stars. And I thought our universe can very well be like that very small galaxy, and beyond our universe may exist another complex universe where God can be a complex community of existence, which is unlike who God is as revealed to us.

With that, I decided to dig up some relevant journal articles to read. But in all this searching, I am not worried that I will lose my faith, I know I will not. I trust in Jesus as the way, the truth and the life. I trust that God and his truth will not be maimed by any vicious attacks let alone mere scrutiny.

And I found these articles useful:

"My failed atheism: Mark Bauerlein tells how he came to desire something beyond his contemptuous nihilism" by Mark Bauerlein in First Things, May 1, 2012, p.47

"The atheist's dilemma: I tried to face down an overwhelming body of evidence, as well as the living God" by Jordan Monge, in Christianity Today, March 1, 2013, p.88

"The new atheism: reflections of a biblical scholar" by John Barton in Modern Believing, January 1, 2012, p.36

It was in the above final article I read that had a reference to this book: 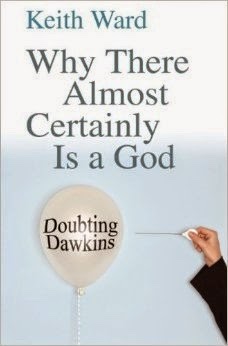 Why There is Almost Certainly a God: Doubting Dawkins
by Keith Ward

I read a preview of it and thought it might help, and so I bought a copy and started reading. It's not so much Dawkins I want to debunk. I want what the title of the book promises: to tell me why there is almost certainly a God.

As Socrates said, "An unexamined life is not worth living" that would most probably have inspired Dr Elton Trueblood to say "the unexamined faith is not worth having", Ward said, "It is important to be critical of all our beliefs -- to ask what we mean by them and what reasons there are for accepting them."

So here I am trying to see if I can sort it all out. It will be a tough read though -- as I would have to figure it out through the philosophy, logic and physics, topics I am in no way familiar with.

See my subsequent thoughts: My Nagging Thoughts on the Existence of God 2