Social connectedness as the key to success

September 13, 2015
Okay, okay - more TED Talk videos. I suppose this weekend has become a TED Talk weekend for me.

I enjoyed the learning and I like the speaking styles of some of the speakers. They were mostly excellent talks, but I've only ever clapped my hands—literally, that is—for two. One was Joseph Foer's talk I've watched and blogged about a month ago.

And here's the other one:

Why it's time to forget the pecking order at work

It is about how an organisation can be successful. It is not from competition between employees or teams. It is not about picking superstars, or the brightest people and giving them all the resources and all the power. The results of such is usually aggression, dysfunction and waste. She said, "If the only way the most productive can be successful is by suppressing the productivity of the rest, then we badly need to find a better way to work and a richer way to live."

Instead, what brings success is social connectedness to each other. It means that "what happens between people really counts, because in groups that are highly attuned and sensitive to each other, ideas can flow and grow."

I agree with all she said here and it was mostly what I have been thinking about lately, except of course, she articulated it all so well. When I see at the end of the video that she has written a book on it, I quickly got a copy, especially at the mention of the topic of organisational culture. 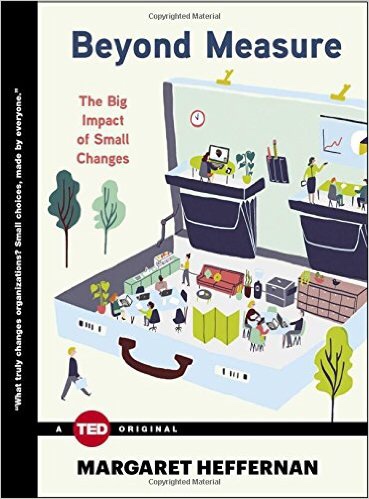 Beyond Measure, The Big Impact of Small Changes
by Margaret Heffernan

I finished the book in one day. It is very interesting, though I do have some reservations and would need to take more time for a re-read. She did qualify it by stating that she does not provide a formulaic or a step-by-step answer to the issue. There is none. The matter is most complex and would require much thought and experimentation.

However, if I were to see her from a Gallup strengths point of view, I think she has the same themes as I do, which is probably why I seem to so readily agree with her. From her writing, I can see Connectedness, Empathy and Intellection as her top Gallup strengths. If that is so, would her proposal still be valid for company leaders with Gallup themes that are different from hers?

I plan to make this book a reading requirement in my work team, and hope to find some answers, especially in these two topics: (1) the High Potential talent group and (2) forced ranking of employees in their performance.

She has convinced me that it might not be a good idea to identify and acknowledge a group of employees as "high potentials" in light of the Pygmalion effect. I've had that same conclusion with why I disagree with the "Employee of the Month" award. And now I see the same with high potentials too.

And I have always been against forced ranking, but I have yet to find another way to replace it. She did not give any suggestions.

So it's back to the thinking block for me.