Are you sure Jesus is not alive? 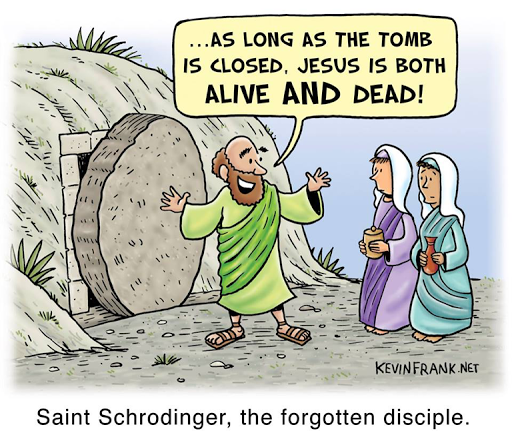 Dr. James F McGrath posted this cartoon by Kevin Frank which is so amusing to me.
But amusing only on the Schrödinger part, more precisely the all-too famous Schrödinger's Cat. The checking of the empty tomb is no joke. Every living person, whichever religion we subscribe to, must seek and question what we believe in. This is so we know for sure it is the right thing.
The Schrödinger cartoon bears a very good message. If you have not checked in the tomb, you will never ever know, will you? Are you sure Jesus is not alive? Are you sure he is not the only way as he says he is? You will never be sure unless you go find out for yourself.
The good thing about Jesus is that we have with us the most number of earliest and most reliable manuscripts in the world. What you read in the Bible is as accurate as it can get to the historical account two millennia ago.
For one, parts of the New Testament have been preserved in more manuscripts than any other ancient work, having over 5,800 complete or fragmented Greek manuscripts, 10,000 Latin manuscripts and 9,300 manuscripts in various other ancient languages.
Bruce Metzgar said, "In evaluating the significance of these statistics...one should consider, by way of contrast, the number of manuscripts which preserve the text of the ancient classics. Homer's Iliad...is preserved by 457 papyri, 2 uncial manuscripts, and 188 minuscule manuscripts. Among the tragedians the witnesses to Euripides are the most abundant; his extant works are preserved in 54 papyri and 276 parchment manuscripts, almost all of the later dating from the Byzantine period...the time between the composition of the books of the New Testament and the earliest extant copies is relatively brief. Instead of the lapse of a millennium or more, as is the case of not a few classical authors, several papyrus manuscripts of portions of the New Testament are extant which were copies within a century or so after the composition of the original documents."
Sure, there are a lot of questions. You may never be perfectly sure. It is indeed by faith. But God has revealed himself to us in no other way than to come to us in person. How more real can it get? It is all in the historical documents.
Please for the sake of your life, check them out. Ask the questions. Find the answer.
pearlie
at March 26, 2016