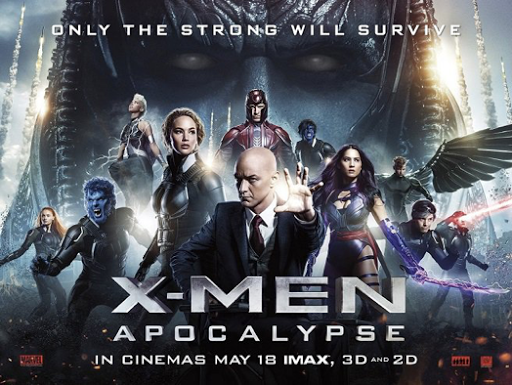 X-Men: Apocalypse premiered today here in Malaysia and my colleague, a comic fan, wanted to watch it and so I went along and had a great time. It was good.
Warning: some spoilers ahead. No serious spoilers though, no worries. But if you want to experience the movie for yourself, then stop reading here. But do take note of the last paragraph.
I like the cast. I did not know who was playing the villianest villian ever En Sabah Nur. I was wondering while watching but could not make out at all who was behind all the make up and CGI. It's actually Oscar Isaac who played Poe Dameron in Star Wars: The Force Awakens. He was awesome here in X-Men, mean and bad. I remember the scene where he said he has been called by many names, including Elohim, a Hebrew word for God. Wikia claims that he even used the name Yahweh, God's personal and sacred name in Hebrew, but I didn't notice it in the movie. Now, I am curious. Did he?
My favourite scene was when Quicksilver arrived at the school to find that it was about to explode. His cheeky demeanor while saving all the students was funny and endearing. And it was ultimately nostalgic to hear Annie Lennox's Sweet Dreams (Are Made of These) played throughout the entire scene. It was brilliant.
This was the first time I went for a movie on the first day it was released. I haven't read anything or any reviews about it. I have not revised on the previous five movies. And so I remembered only bits and pieces here and there. It's time I watch those five again and then maybe I'll go watch X-Men: Apocalypse, again.
Oh yes! There is a final clip at the end after all the rolling credits. We waited for it hoping for something and there it was. So do remain seated till the end until all the lights are back on.
pearlie
at May 19, 2016