A need for expository sermons 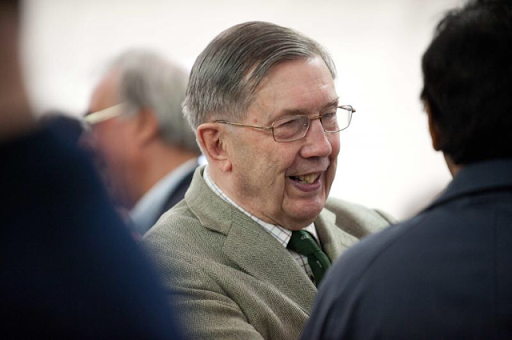 I have begun to listen to mp3 sermons by Dick Lucas again. He is still my favourite speaker.
He is an Anglican evangelical cleric, best known for his long ministry at St Helen's Bishopsgate in London, England. He was the rector there from 1961 to 1998. He founded the Proclamation Trust in 1986 as a center to train men and women on reading and studying the bible contextually. Now in his 90s, he still has an active and influential ministry. He preaches and speaks at conferences and serves on the leadership team of the Cornhill Training Course.
He preaches very good expository sermons giving you both the context of the passage and the bible as a whole.
I just listened to part 1 of his sermon The Race set Before Us (2 Tim 4:1-8) and learnt that Onesiphorus is one rather special person.
Lucas compared Paul being imprisoned in Rome to a pastor then being imprisoned in Iran. The pastor's friends who visited him in the Iranian prison went through invasive interrogation as to who they were and why they would want to visit the pastor in prison. They were asked who among their friends who have also converted to Christianity. There were soon released after being fingerprinted. Would you have the courage to visit this pastor in Iran?
In the same way, Paul was imprisoned in Rome under Nero. Imagine what Onesiphorus would have gone through when he visited Paul in prison. Paul said this of him: "May the Lord grant mercy to the household of Onesiphorus, for he often refreshed me and was not ashamed of my chains, but when he arrived in Rome he searched for me earnestly and found me - may the Lord grant him to find mercy from the Lord on that Day! - and you well know all the service he rendered at Ephesus. - 2 Timothy 1:16-18
I have new respect for this small but great person in the bible. We can learn many lessons just from him.
I really miss listening to expository sermons. I plan to listen to more of these mp3 sermons in my commute. I have also just signed up to attend the Centre for Expository Preaching Conference 2016 to give myself a three-full-day dosage of it. As much as I am not a preacher, I am looking forward to it, as well as the Klang Valley Bible Conference 2016 in the evenings after the day conference.
pearlie
at July 13, 2016