A book I couldn't put down 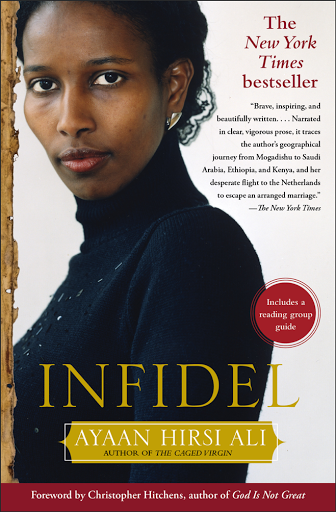 Infidel, My Life
by Ayaan Hirsi Ali
I got to know about Ayaan Hirsi Ali when I watched a debate in YouTube and I've been impressed with her every since. I found that she wrote several books and I got a copy of Infidel, My Life to read.
I started reading and I could not put it down.
She wrote about growing up in Somalia, Saudi Arabia, Ethiopia and Kenya. She was blessed to be born in a well-known family line but her young life was harsh and hard. She was arranged to be married to a man she haven't met before and in her travel to her new home, she escaped to Netherlands and sought for asylum. She gained citizenship, graduated in political science and began working in the Dutch parliament. However, she soon had to be placed under high security because her partner in producing a movie was murdered as a result. She now lives in America.
The book received much praise. I found these accolades from Wikipedia:
The launch of the book in the Netherlands was considered a success, with the initial print run selling out in two days. A review in de Volkskrant concluded that "anyone who discovers Hirsi Ali's tumultuous history can only sympathise with her". The German edition of the book, Mein Leben, meine Freiheit ("My Life, My Freedom"), debuted in the top 20 of the bestseller list of Der Spiegel.
The Pulitzer Prize-winning author Anne Applebaum, writing in The Washington Post, said "Infidel is a unique book, Ayaan Hirsi Ali is a unique writer, and both deserve to go far." A review in The New York Times described the book as a "brave, inspiring and beautifully written memoir".  In an interview, Newsweek editor Fareed Zakaria described it as "an amazing book by an amazing person".
pearlie
Books Reading Religion