I finished reading Ayaan Hirsi Ali's Infidel today. It was an excellent read. I was impressed by how much she had progressed while in Netherlands, learning Dutch and especially her obtaining a degree in Political Science from Leiden University. She did not write in detail about what she studied but it has definitely piqued my interest.

With that, I began searching for my next read and looked for political based books that I can learn from. I found several in Amazon that sound very interesting but I also realized that it might not be as beneficial if I did not know enough about Malaysian politics. I then tried to search for books that would give me a good analysis of the political world in Malaysia. There were very few titles available in that category in Amazon and I only found this one interesting. 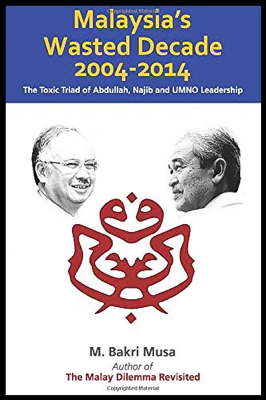 There wasn't any Kindle version available and so I would have to get the print copy. I called Kinokuniya and confirmed that they do have a copy in stock and I requested that they reserve it for me.

When I arrived at KLCC and while I was getting onto the escalator at the carpark, I bumped into Lim Kit Siang! Here I am finally trying to understand more about Malaysian politics and going to the bookstore to get such a book, to bump into a Malaysian politician.

What are the odds.

I walked into Kinokuniya and headed to the Political Science section and found those very Kindle titles I added into my Amazon Wishlist. I browsed awhile and there he was again, at the Political Science aisle. Where else would he be? I thought I might as well go say hi and shook his hand. He was very pleasant and nice.

Finally, I am reading a print book. I haven't done that in years and I am finding it difficult mainly because the print is too small for my eyes. As for the book, it isn't very much of a systematic analysis of the issues. It is a collection of the writer's articles over the years from 2004 to 2014, hence the title, though each of the article does provide some analysis that I hope will consolidate in the end to an overall conclusion of the matter. I hope I will nevertheless still learn something from it.