Can you be gay and Christian? 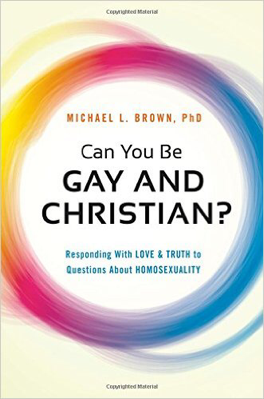 Can You Be Gay and Christian? Responding with Love and Truth to Questions about Homosexuality
by Michael L. Brown, PhD
I had wanted to know more about the LGBT subject for awhile now. I missed a conference on it once before and so when I noticed this book, I quickly got a copy and dived in.
I did not know much about it, not about what their arguments were and how they justified and explained their lives in light of Scripture. The book presented it very well with every chapter beginning with a "gay Christian" argument followed by a biblical answer. Brown was fair in his treatment of the subject with grace and compassion.
He explained the biblical position of homosexuality through context and word study. And as much as the LGBT scholars try to read it positively into God's word, Brown has shown that "every single reference to homosexual practice in the ancient Jewish world is 100 percent negative—sometimes in the strongest of terms—and there is not a single positive reference to be found."
And I like the way he explained the creation of man and woman. I have never looked at it this way before: "The author of Genesis is explaining to us that because the woman was taken out of the man, the two are now joined back together as one in marital union, each one uniquely complementing the other." Then he quotes A.B. Simpson saying, "Man was created male and female. This does not mean, as it would seem at first from the language, that he created the male and the female at the same time, but He created male and female in one person. The woman was included in the man physically and psychically, and afterwards was taken out of the man and constituted in her own individuality," concluding that "only a man and a woman can be joined (rejoined!) together in this way."
This is a must-read book. You may or may not agree with him, but at least he presents both sides and faithfully explains the Bible as it is intended by the original writers as inspired by God. And most of all, he is firm in his stand that we are all broken people before God and we are all in need of God, as heterosexuals or homosexuals, in need of his grace, mercy, love and redemption.
pearlie
at November 29, 2016