I was checking out some articles about language learning and found some very interesting information.

1. There are five sets of people on language acquisition (Source: Multilingual People).
For one, here are five different categories of people depending on the number of languages acquired and their percentage of world population:
I am not sure now if I can be considered a multilingual person if I can speak, read and write English and Malay but only speak Cantonese and some Mandarin.

2. There are five categories of languages on amount of time required to acquire them (Source: Language Difficulty Ranking)
Then I found out that the Foreign Service Institute (FSI) has a list to show the approximate time you need to learn a specific language as an English speaker. 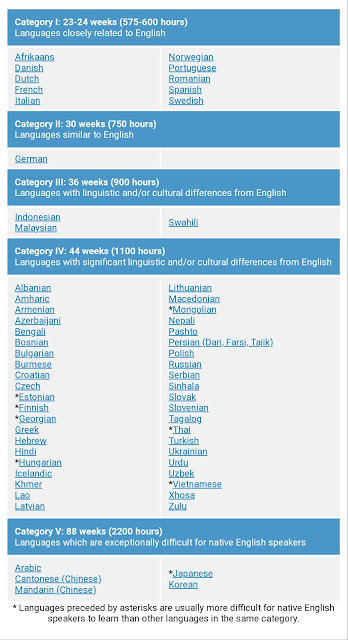 I found myself and most of my Malaysian Chinese friends in a very interesting position with our first languages (English and Malay) and so-called mother tongue (Mandarin and/or Cantonese) in Category I, III and V. This should make our learning of most languages quite effective and efficient. But I still find it difficult.

3. We desire to learn a new language based on the prestige of the speaker (Source: What Makes a Language Attractive)
The allure of a language may have more to do with perceptions of that country's status and social values than its actual sound. Sociolinguists believe the attractiveness of a language is determined by how positively we view a particular group of people who share a cultural outlook.

5. Chinese is the hardest language in the world (Source: Why Chinese is So Damn Hard by David Moser)
For someone who have been trying my whole life to learn Mandarin, I find this article amusing. Moser said that, Chinese is not only hard for English speakers, but it's also hard in absolute terms. Which means that Chinese is also hard for Chinese people.

There, Chinese is hard. But I am still trying.