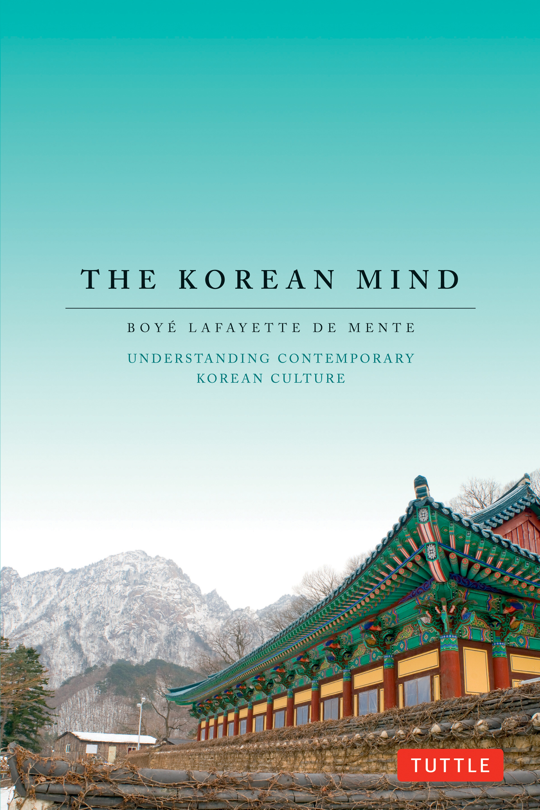 The Korean Mind, Understanding Contemporary Korean Culture
by Boyé Lafayette De Mente
I was looking forward to digging into this book when I laboriously finished the last book I was reading, except that I am very, very disappointed with it.
I have only just begun reading it and I already have four reasons to stop reading but I'm still hanging on, for now.
One, for a book that is about the culture of the Koreans, I wasn't happy that the author decided to print names in a westernized way, first name and then last name when all Korean names begin with the surname and then the given name. This really irritates me. Thankfully, there aren't many names used, so far, but when they do appear, I keep having to take note and make effort to read it in the proper Korean way. Come on, it is a book about the Korean culture!
Two, the book presents the subject using distinctive Korean words following the Korean alphabetical order. Well and good except that it would be much easier to read if it were thematic instead. For example, I was reading the section on 암흑기 (am-heuk-gi) The Dark Period and the next section is on 아내 (a-nae) Wives: The Inside People. My mind has to take a few minutes to make an adjustment to move from thinking about the dark ages to thinking about wives.
Three, the spelling of Korean words in this book is atrocious to say the least. The author made a mistake right at the very beginning in the first chapter when he wrote about fathers. The right spelling is 아버지 (a-beo-ji) but the author spelt it 아보지 (a-bo-ji), which is incorrect. In writing the previous paragraph above, I just found out those two words are also spelt wrongly. I have spelt it correctly above: 암흑기 instead of 암훅기 and 아내 instead of 안애. This is really unacceptable. Would you read a book in any language with multiple spelling errors?
Four, the author is not accurate in his writing and presentation of facts. He wrote, "This was the infamous k’ou t’ou (kowtow) long associated with China. K’ou means “head,” and t’ou means “bump” or “knock”". He got it all mixed up. In actual fact, it is k'ou that means to knock or to bump and t'ou means head. What other inaccuracies are there in the book that I don't know about, which will cause me to learn the wrong things?
This is the first time I have ever come across such a badly written book, and I should abandon it already.
pearlie
at August 10, 2017