Our itinerary today is to Jiufen, Shifen and Miaokou Night Market in Keelung.
And I thought we hired a tour guide for one day but I must have misinterpreted it.
Turned out that I only hired a driver.
It was disappointing but on the bright side of things, my mom wouldn’t have preferred a stranger prodding us to go here and to go there and by the end of the day, we have agreed that we didn’t like the guy anyway, so all is good that he isn’t our guide.
The day started when our driver brought us to this place for breakfast. 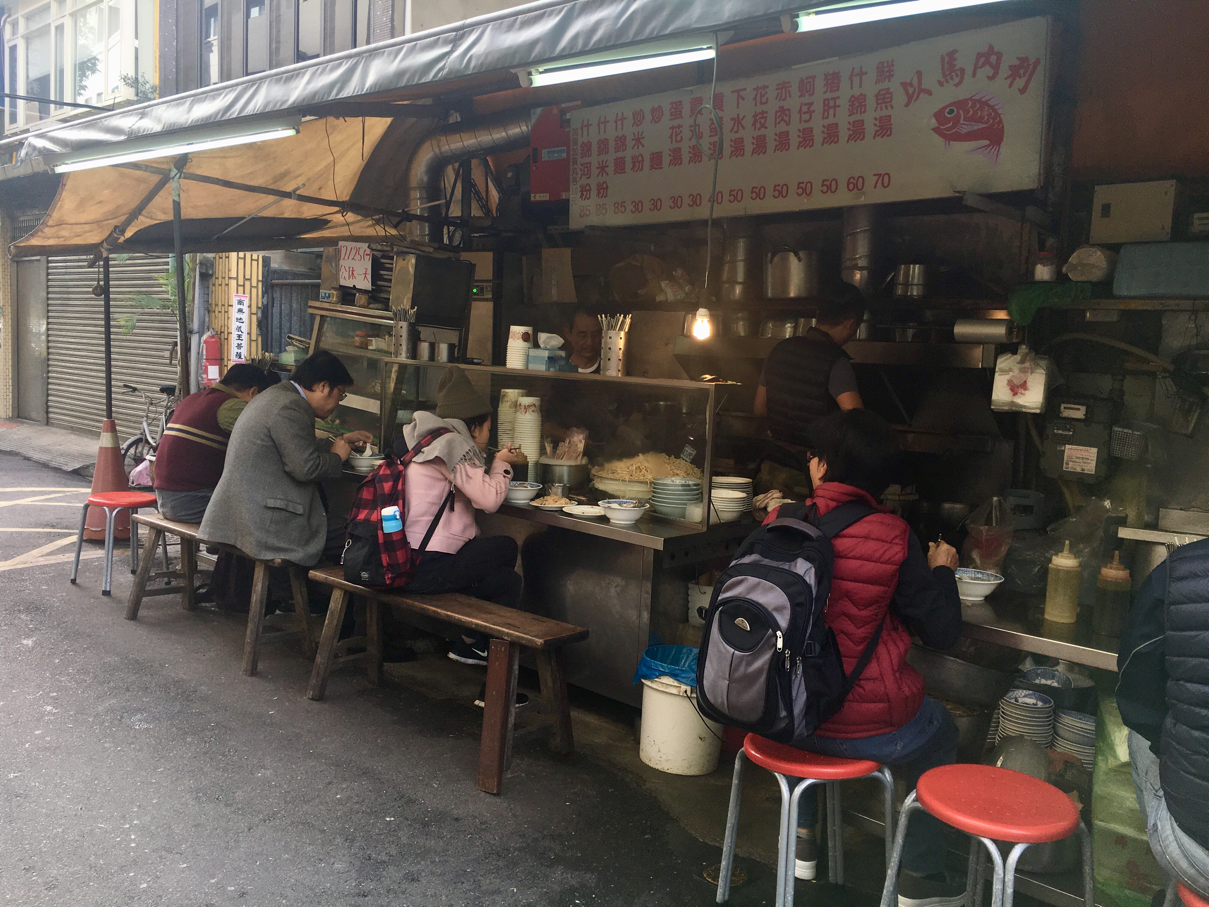 My mom’s first reaction was classic—why? Why such a lousy place and not a proper restaurant—my niece and I laughed it off telling her that these are the places where we should be for food in Taipei.
We ordered fish soup and fried meehoon. In the end, my mom liked the meehoon so much, she had second helpings! 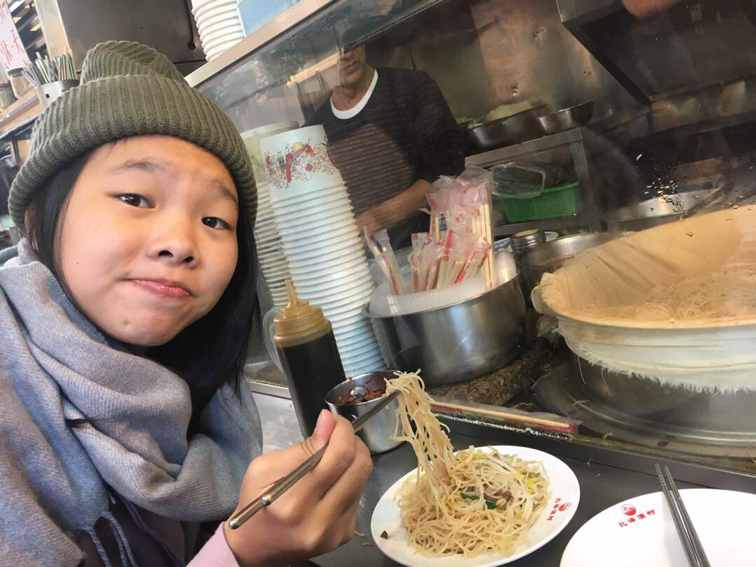 After breakfast, it was a 30-minute ride to Jiufen. The only problem was this: it was raining. What a bummer. 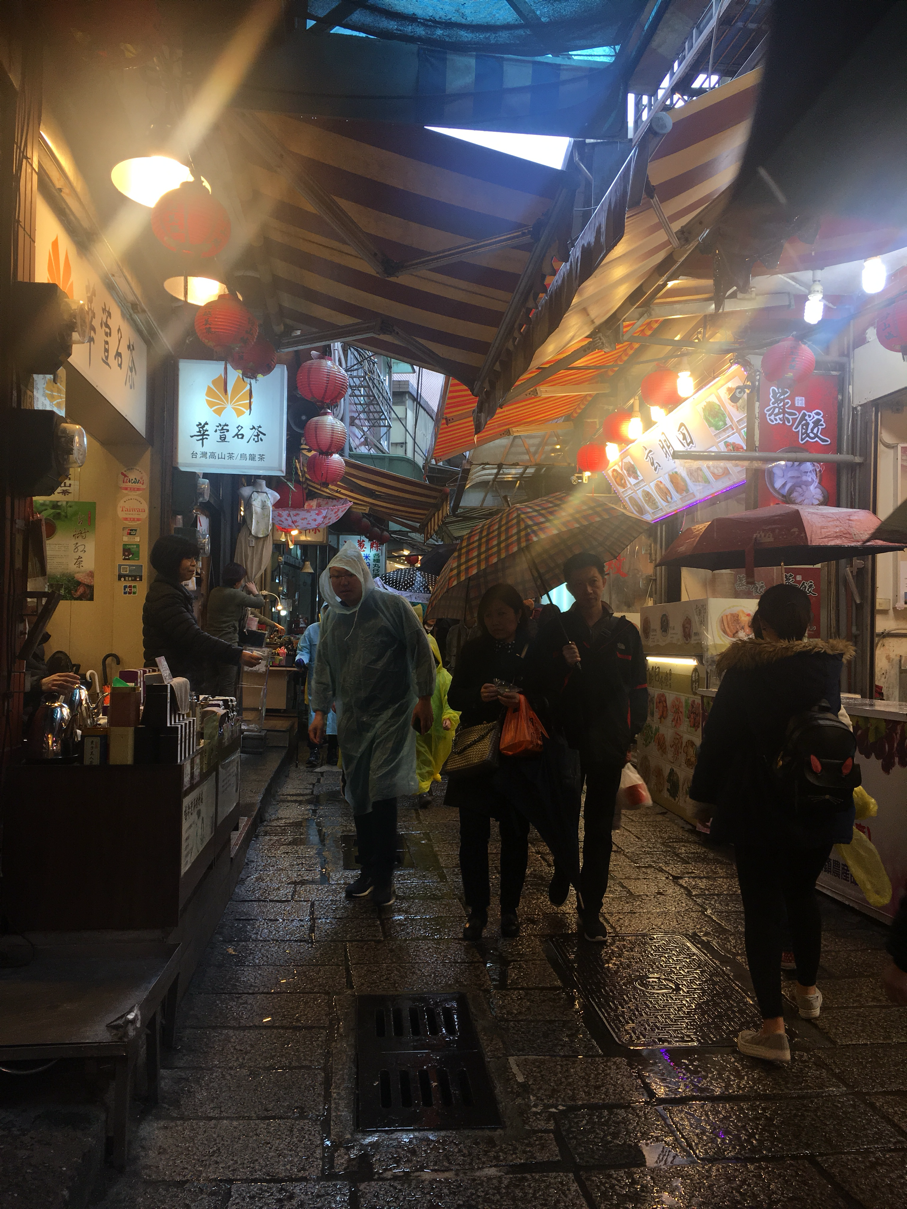 Jiufen, meaning nine portions, is in a mountain area in Ruifang District, northeast of Taipei City.
Its name originated from the Qing Dynasty period in the 18th century when the isolated village housed nine families and when the shipments arrived, they would request for nine portions of goods.
Apparently it became popular in 2001 because of its resemblance to the downtown area in the anime movie Spirited Away.
We donned our raincoats and started exploring the old streets lined with stores selling food, drinks, tea, souvenirs, clothes and shoes.
As we trod along the narrow streets, we soon got lost and began wondering how to get back to the spot where the driver will pick us up.
I then saw this flight of stairs going down. It looked more interesting but my mom was reluctant fearing that if it’s the wrong way, we will have to climb all the way up again. 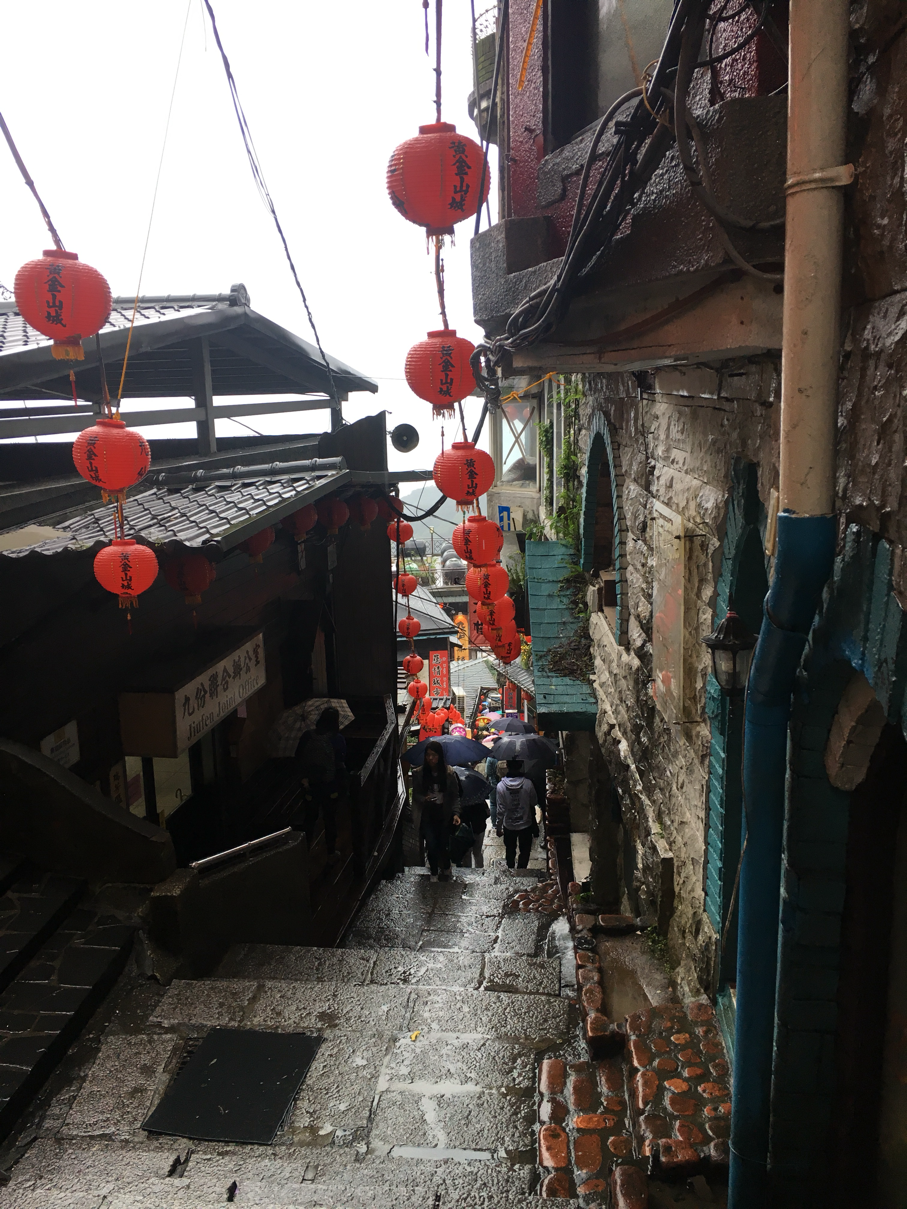 But my instinct says to go.
And I am glad I listened. The alleyway led us to the very site that attracted me to Jiufen and Taipei for that matter in the first place—the site that marked Jiufen as the Santorini of Taiwan. 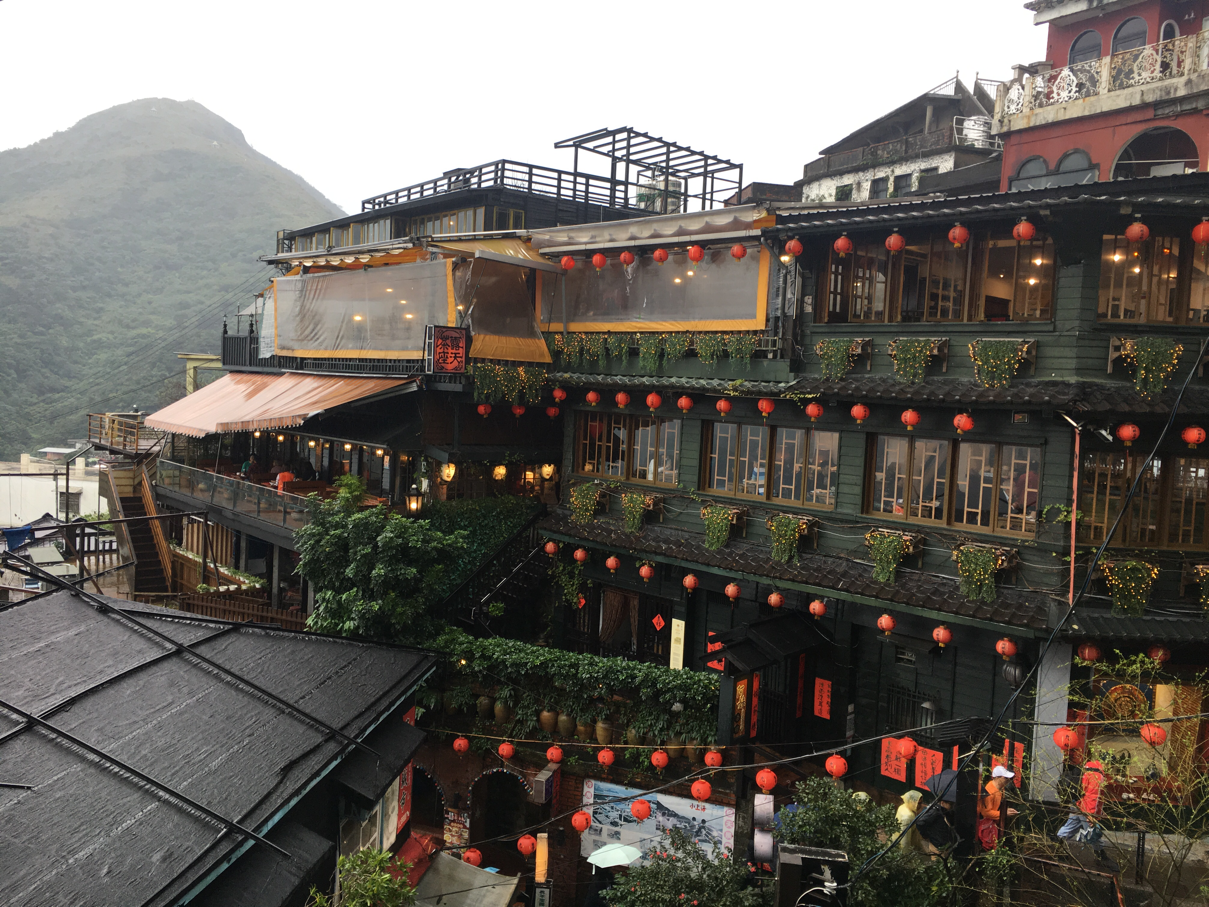 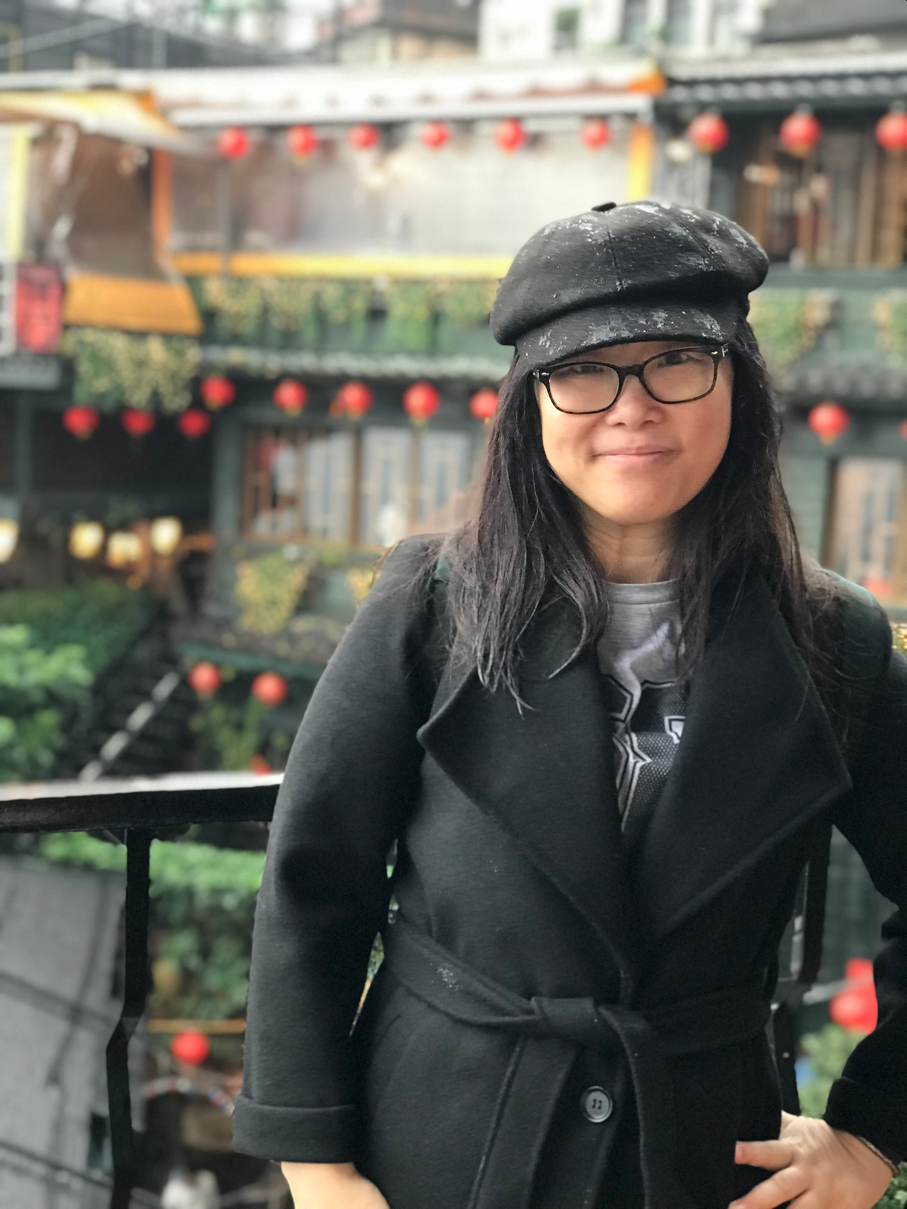 The flight of stairs we took turned out to be the most picturesque place in Jiufen. You will see this on most travel sites on Taiwan, and my shot here is a rainy day one. 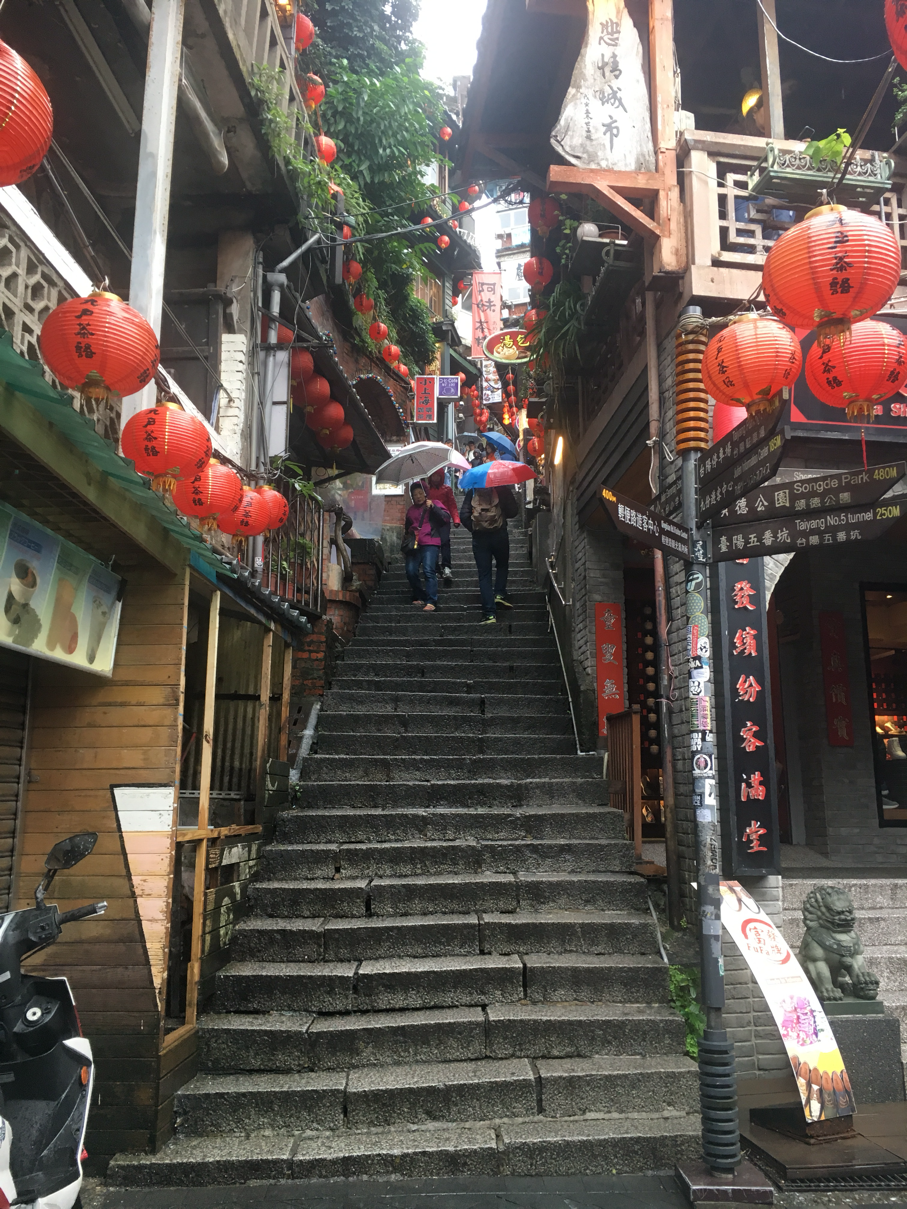 Our next stop was to Shifen. This place is where you can light a lantern into the sky. 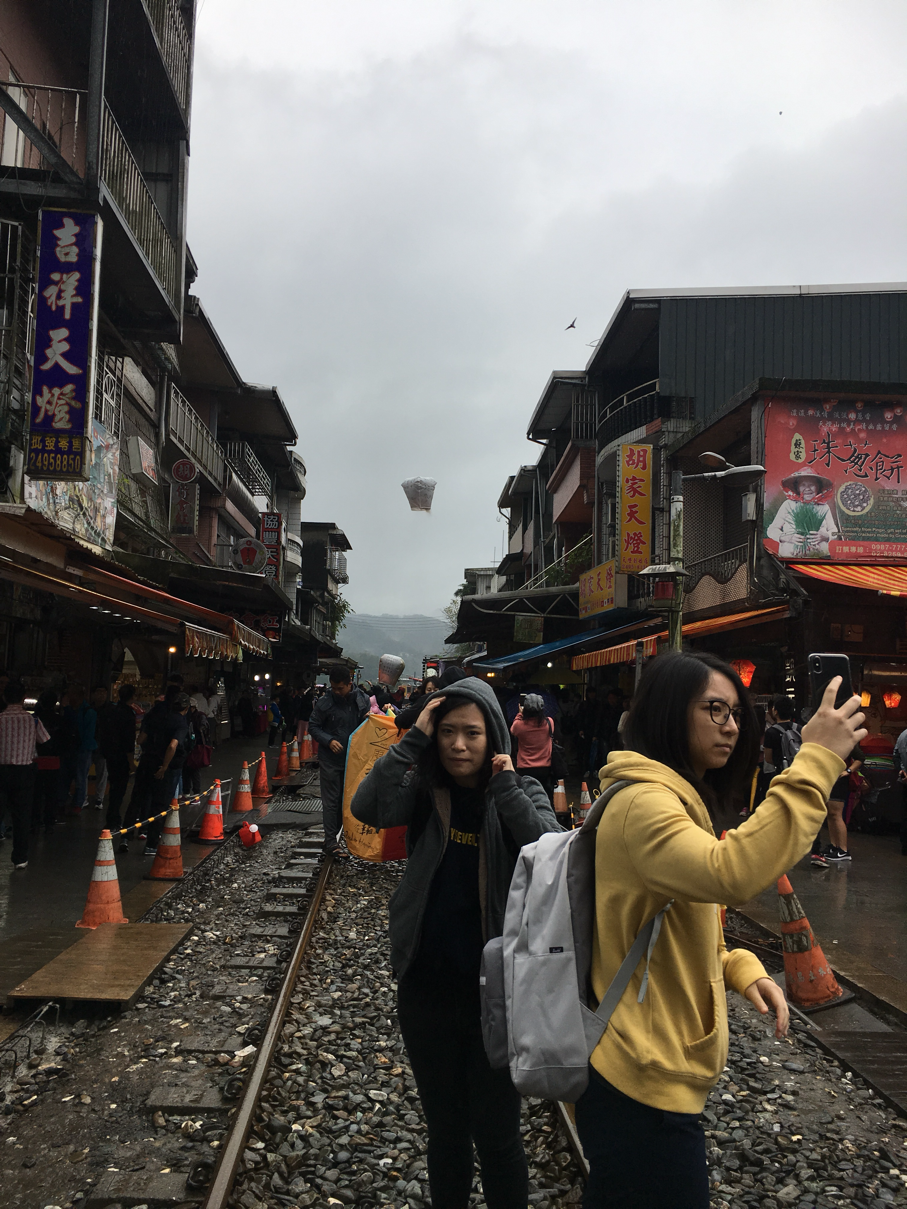 And all this happens right in the middle of a train track.
My mom asked if trains do ply the tracks. My niece and I replied, “Of course not!”
And right at that very moment, we heard a whistle and we had to get off the tracks...for the train. 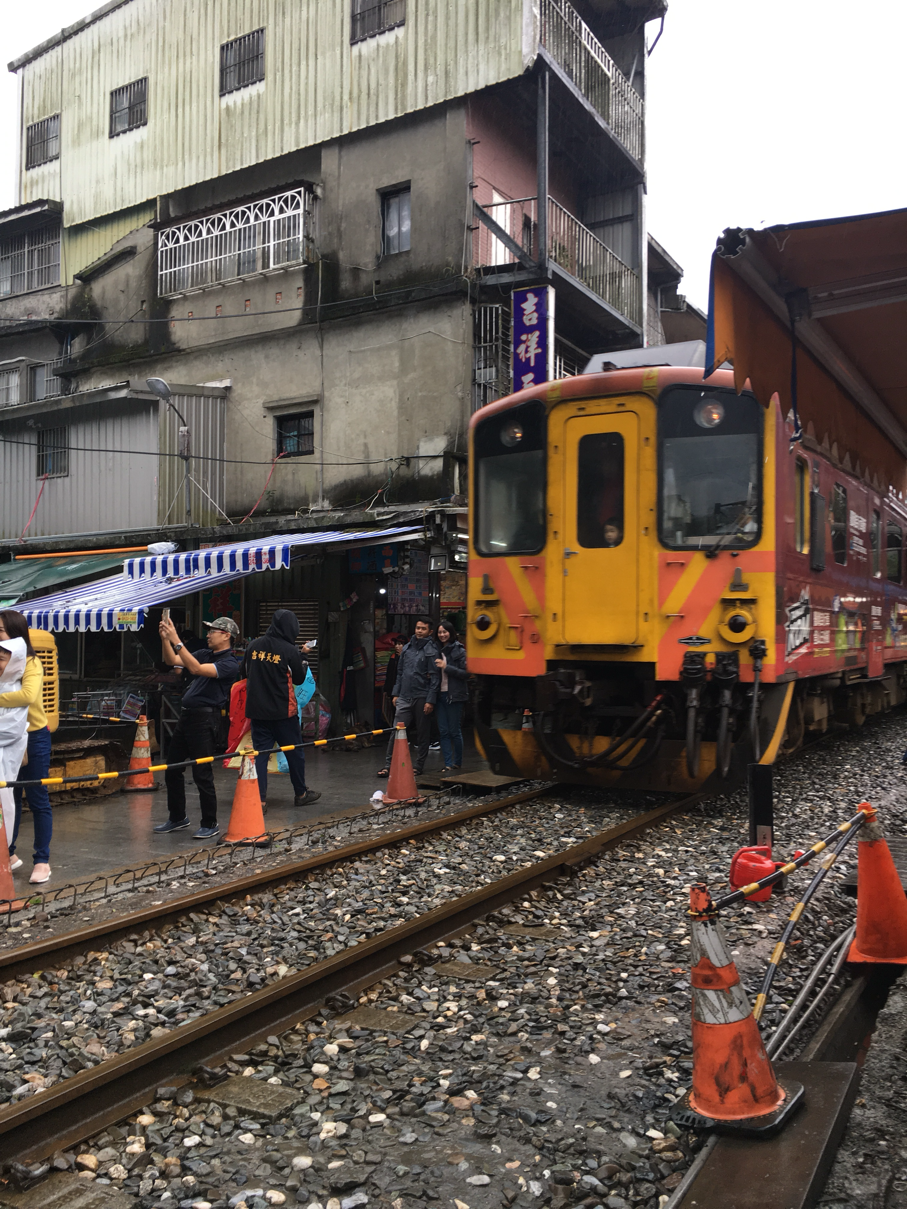 My mom had a good laugh. How wrong we were...and how dangerous this can be.
And yet, hoards of people stand on the tracks taking pictures and flying lanterns up into the sky. 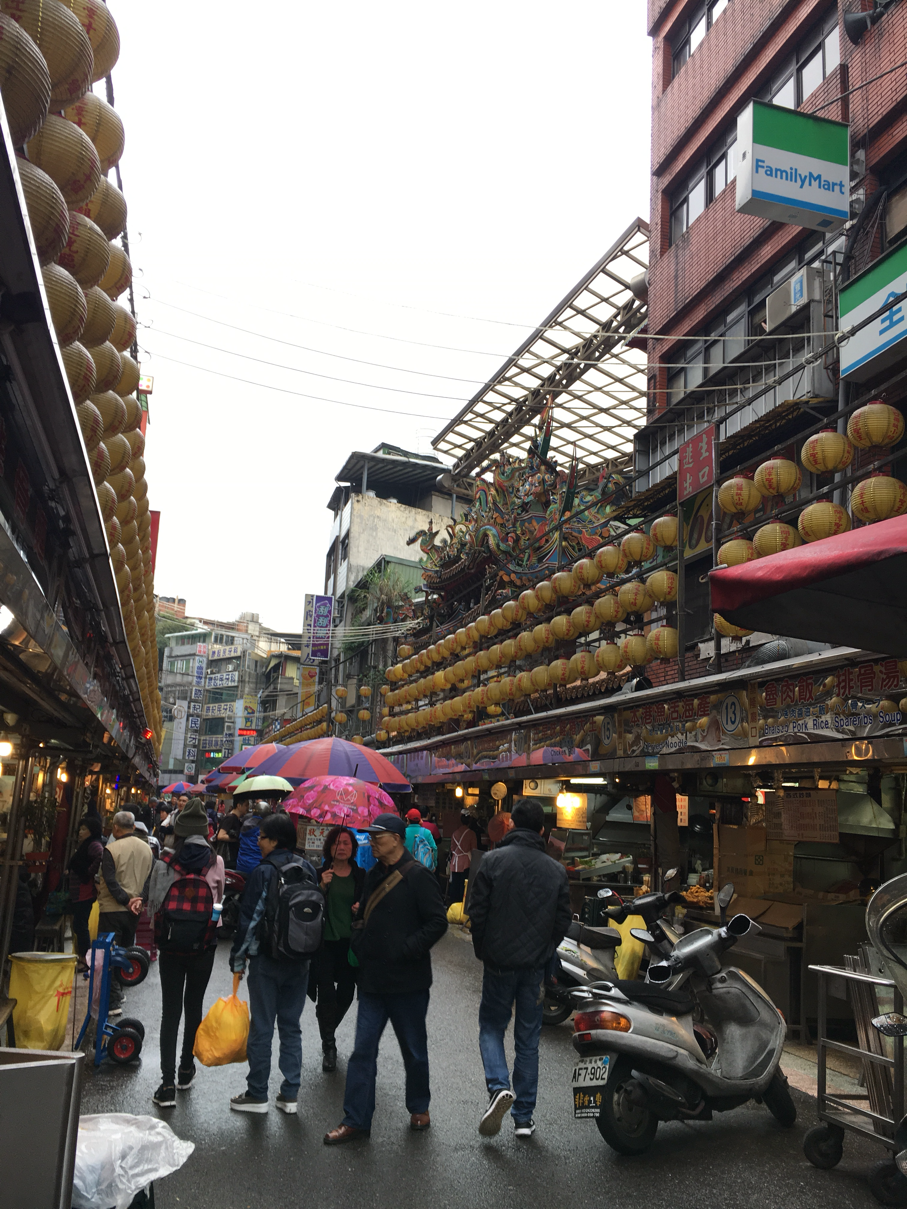 It wasn’t night yet but the stalls are slowly being set up.
We soon realised it’s time they set up anyway because it begins to get dark from 4:30pm and by the time it’s 5:00pm, it feels like 7:00pm in Kuala Lumpur! 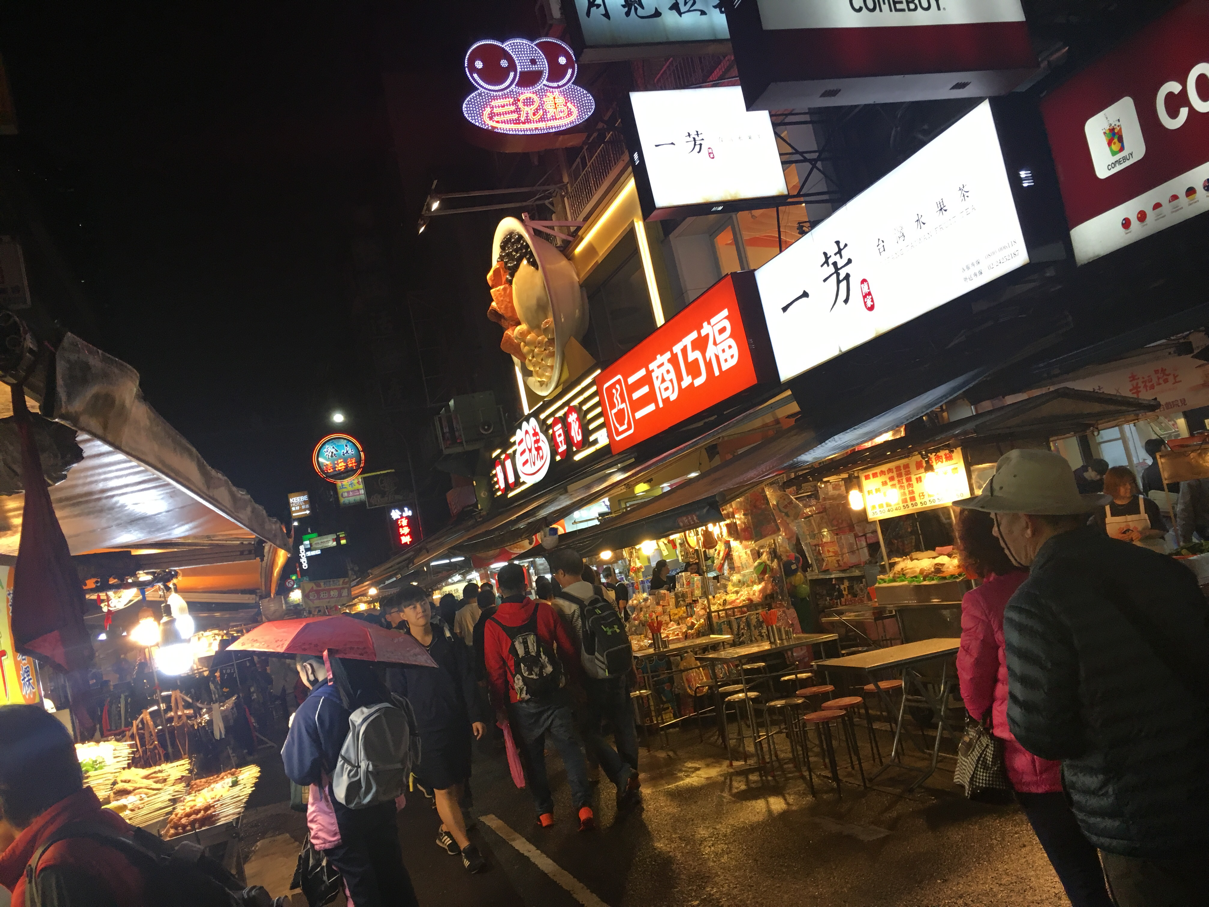 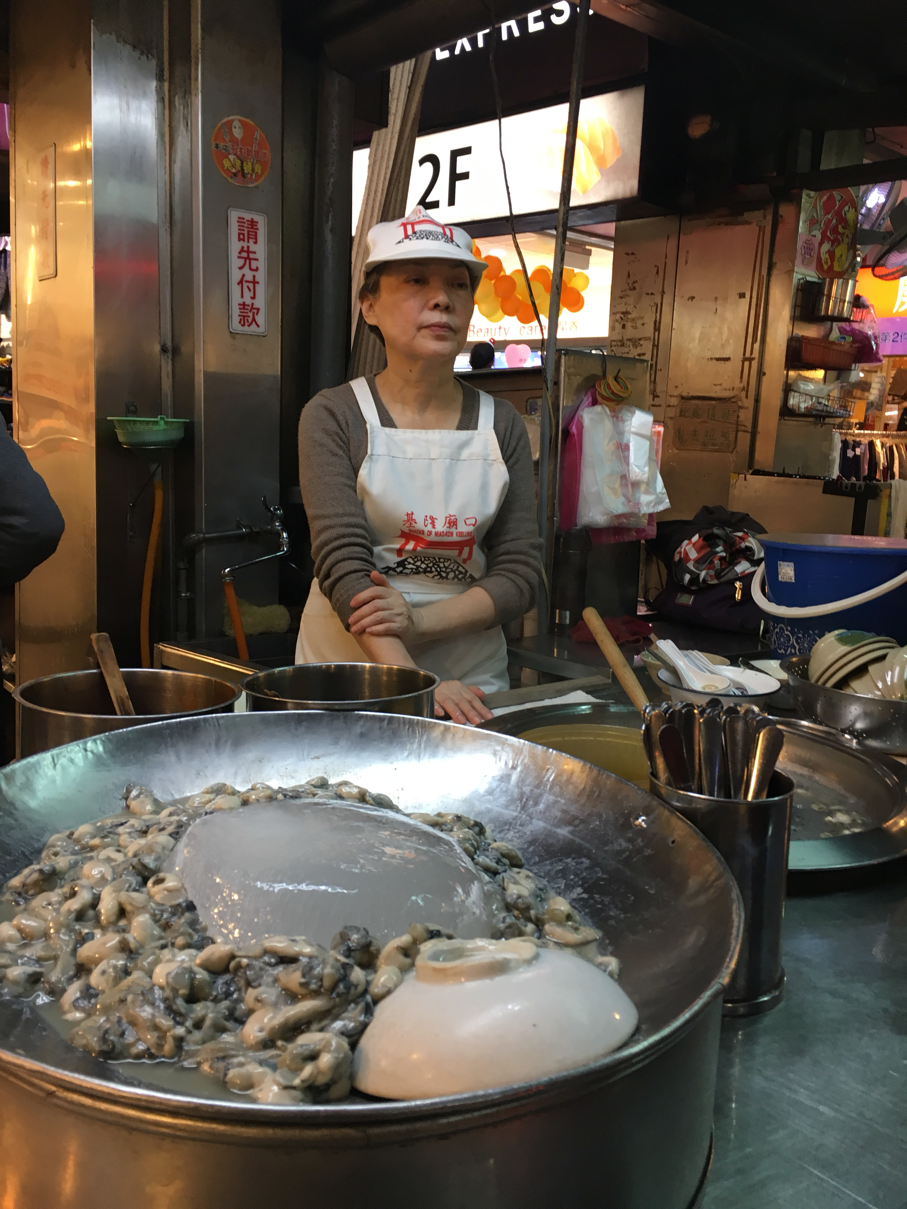 ...and how I wish I can bring this pig back. 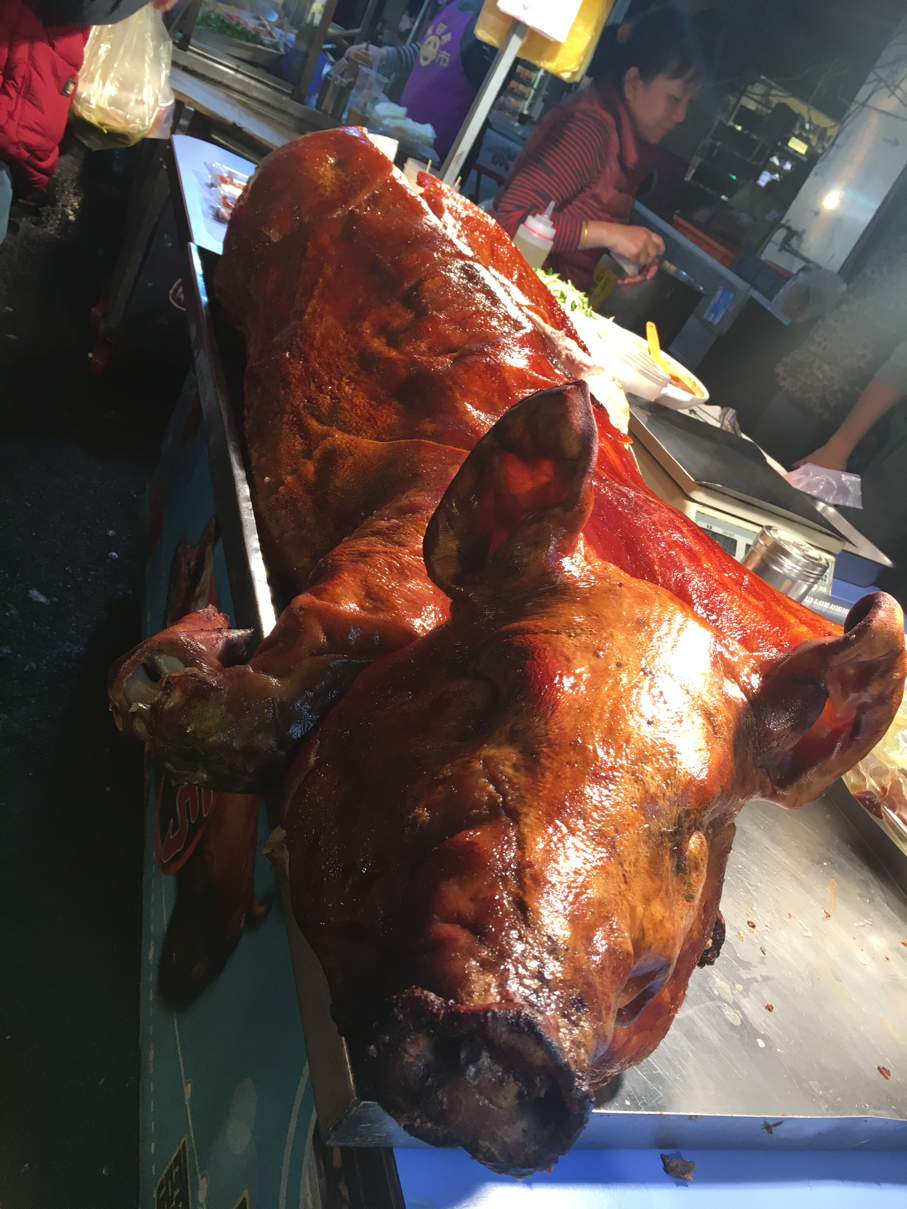 We got back to the hotel at 7:00pm and even though it was still very early, we were quite tired and decided to call it a day.
pearlie
at December 14, 2017