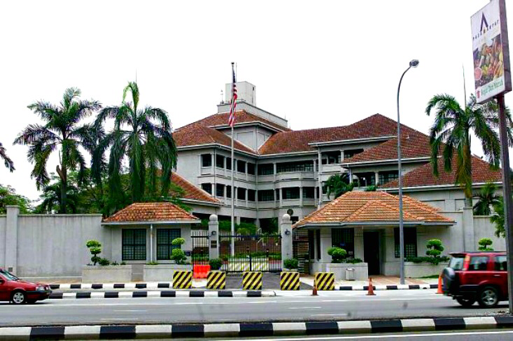 This morning was indeed very 紧张 (Cant. gan2zoeng1/Mand. jǐn zhāng) for me.
I almost never mix languages in a single sentence in my blog, though that is very much how most of us converse here in Kuala Lumpur, Malaysia, where we will sometimes even use up to 4 languages in one sentence—English, Malay, Mandarin and Cantonese or Hokkien.
I don’t think there is a direct translation for 紧张, but I think “being nervous, stressful, intense and nerve-wrecking” would be quite accurate to translate it.
And there is no better way to describe what happened to me this morning.
Today was my US Visa interview day and I requested for the 8:00am slot. I am not allowed to be there earlier than 7:45am and so I decided to drive and park my car at my office and take a GrabCar to the embassy, which is quite nearby.
My alarm rang at 6:00am but I dillyed-dallyed while keeping an eye on the expected time of arrival on Waze. I planned to arrive at 7:30am and loiter around until 7:45am.
All was good.
Until I hopped into my car, and Waze added an extra 30 minutes to the expected time of arrival.
I started to panic. Oh no, oh no, oh no.
I tried my best to drive as fast as I could, using the fastest congested lane.
But traffic was bad.
And as I considered the two alternatives—drive directly to the embassy and look for a parking space or park in office and take a GrabCar—I decided on the latter.
I tapped to book a GrabCar at 7:35am while I was still in the Smart Tunnel, which was a good decision because after parking my car and going up to the designated pickup point at the main entrance, the GrabCar arrived just in time at 7:50am.
The driver used the fastest route possible, using back lanes and shortcuts. And at the slip road into Jalan Tun Razak, I actually begged the policeman to not stop us but let us through.
I had my hands clasped together like in a prayer rubbing my palms while saying, “Tolong, tolong, tolong, tolong...” (Malay word for “help” but I said it with a Chinese accent).
He must have seen me though he can’t possibly hear me, because he stopped the car behind us instead!
I arrived at the embassy at 8:06am. I was late but thankfully I was still allowed in.
It was quite a long queue, since I think today is the first interview day for the year after the long Christmas break, but I got it all done in 35 minutes.
They only asked me four questions and they approved my visa. All the documents I prepared were not requested for.
They only took my passport.
Woohoo...USA, here I come.
pearlie
Haha Life Time Travel