How Christianity Changed the World 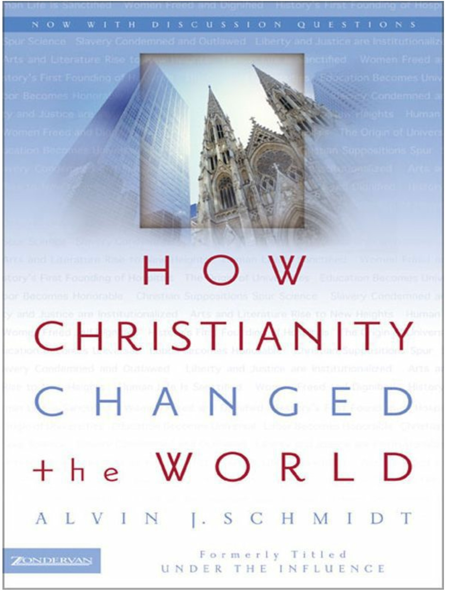 How Christianity Change the World
by Alvin J. Schmidt
I bought this book not long ago and decided to read it, as part of an initiative not to watch any TV today.
And the book is good.
The book “is a survey of the vast, pervasive influence that Christianity has had for two thousand years on much of the world, especially in the West.”
The author quoted three reasons why he wrote the book and I quote:
1. There is a pronounced paucity of information extant and available regarding the influence and impact that Jesus Christ has had on the world for two thousand years. Yet, in a rather nebulous manner many of us “know” that much of our culture, especially in the Western world, bears prominent imprints of Christ’s influence. Much of that influence is still with us even in the ever-growing secular and religiously pluralistic milieu of today.
2. To provide a one-volume resource by which the average reader could learn about the magnanimous influences that Jesus Christ, through his followers, has had for centuries on billions of people and social institutions to this very day. This educational objective is especially important today because Christianity is not only poorly understood, but also maligned, especially by many in the mass media.
3. On the basis of the historical evidence, the author is fully persuaded that had Jesus Christ never walked the dusty paths of ancient Palestine, suffered, died, and risen from the dead, and never assembled around him a small group of disciples who spread out into the pagan world, the West would not have attained its high level of civilization, giving it the many human benefits it enjoys today. One only needs to look to sectors of the world where Christianity has had little or no presence to see the remarkable differences.
There are so many areas of life in the world that was transformed because of Jesus: “In the ancient world, his teachings elevated brutish standards of morality, halted infanticide, enhanced human life, emancipated women, abolished slavery, inspired charities and relief organizations, created hospitals, established orphanages, and founded schools.”
The author explores the transformation in the following chapters:
1. People Transformed by Jesus Christ
2. The Sanctification of Human Life
3. Christianity Elevates Sexual Morality
4. Women Receives Freedom and Dignity
5. Charity and Compassion: Their Christian Connection
6. Hospitals and Health Care: Their Christian Roots
7. Christianity’s Imprint on Education
8. Labor and Economic Freedom Dignified
9. Science: Its Christian Connection
10. Liberty and Justice for All
11. Slavery Abolished: A Christian Achievement
12. Christianity’s Stamp on Art and Architecture
13. The Sound of Music: Its Christian Resonance
14. Hallmark of Literature: Their Christian Imprint
15. Additional Influence: Holidays, Words, Symbols, and Expressions
I have only read five chapters today but I can see how we have forgotten or not realized how life had been before and if not for the changes that Jesus brought into our world, it would have so different and life would not be so good as we have it now.
pearlie
at March 17, 2018