How big is your God?

If was saying that I had a really good week and that it all began when I decided to fast TV for one week.

Let me admit that I have recently gotten addicted to Korean dramas real bad though that’s another story for another day. It’s just that I have been spending so much time on them that I knew that if I didn’t do anything about it, I’d soon be buried in them with no chance of reprieve.
Hence the 1-week fast, which began 8 days ago on Saturday. I wanted to read and started checking out on my Kindle what I have bought, and this stood out. 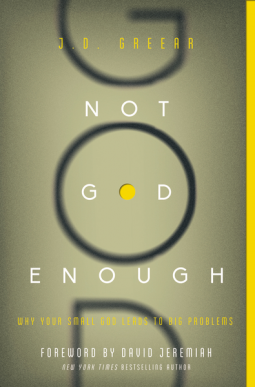 Not God Enough: Why Your Small God Leads to Big Problems

by JD Greear
This is a gem of a book. I would recommend this to anyone who wants to be serious about God.
The book began with a quotation by Evelyn Underhill, “A god small enough to be understood is not big enough to be worshipped.” And that practically summed it all up.
Greear says that “those who understand their forgiveness tremble more, not less, in God’s presence.”
I can see that we now live in a world where we think we are relatively quite good. We go to church and we listen to the Gospel preached and we go through the confession prayer, but we don’t really feel or acknowledge very much our depravity. We know it, but we don’t feel it.
We fail to see how big and holy God is and, how small and bad we are in comparison.
I like this section where he tries to help us understand just how bigger than big God is.
He says, “We prefer a God who is small and domesticated, who thinks like we think, likes what we like, and whom we can manage, predict, and control. We only have to glance upwards at the night sky to see how ridiculous that is.”
He used the universe to explain how distorted our view is of God. Do you know the size of the universe? To cut it short, we can only see 9,096 stars with the naked eye and that is only about 1/100,000,000,000,000,000,000 of what’s actually out there. Scientists have estimated the number of stars to be about 3 septillion and the number is constantly expanding. That’s a three with 24 zeros after it.
Greear then makes it even clearer. He says, one million seconds ago takes us back about 11 days. A billion seconds ago takes us back 31 years and eight months. A trillion seconds? It will brings us to 29,672 BC! He doesn’t even continue on to septillion and these are in seconds!
Imagine that about the universe and know what? God measures off the heavens with his fingers! (Isaiah 40:12)
He is more than huge. And we are but a tiny drop of a septillion. And we think we are on the same playing field. Think again.
So the next time we think we so great, remember he is bigger than big.
How about the fact that we always think we are not so bad, that we are pretty good?
Greear says it well: suppose you are getting a blood transfusion and you find out that 1 percent of it was contaminated with HIV. Would it help if the nurse said, “Don’t worry; it’s only 1 percent”? “No!” we’d shout back, “There is no such think as only 1 percent! One speck contaminates the whole lot.”
We are that one speck and we cannot survive the holiness of God.
I was soon reading another book about the Islamic Sharia law. To the Muslims, they are taught to see themselves as the most perfect people, the perfect race. And the writer said this one thing that really strikes me.
When she heard Christian pastors saying “We are all sinners”, she said that it was “one of the most comforting, liberating, uniting, and humbling expressions” she has heard.
I never had the concept that being called a sinner is most comforting and liberating but the contrary.
But she has a point. If we think we are so good and perfect, then living a life in this broken world will bring us into a reality we will never survive in. Being called a sinnner and being forgiven by God would then be the most comforting and liberating thing of all.
Our God is bigger than big. We are but a speck of a septillion and a sinful bad speck at that and yet he loves us to death on a cross.
How can we even understand that. Find him out and find out why.
pearlie
at October 14, 2018