December 30, 2019
Back in Kuala Lumpur when I booked my accomodations using Airbnb, the app immediately showed me a list of stuff I can do in Seoul. It's Airbnb via experience packages.

And this caught my eye immediately - a music walk in Hongdae with a musician. 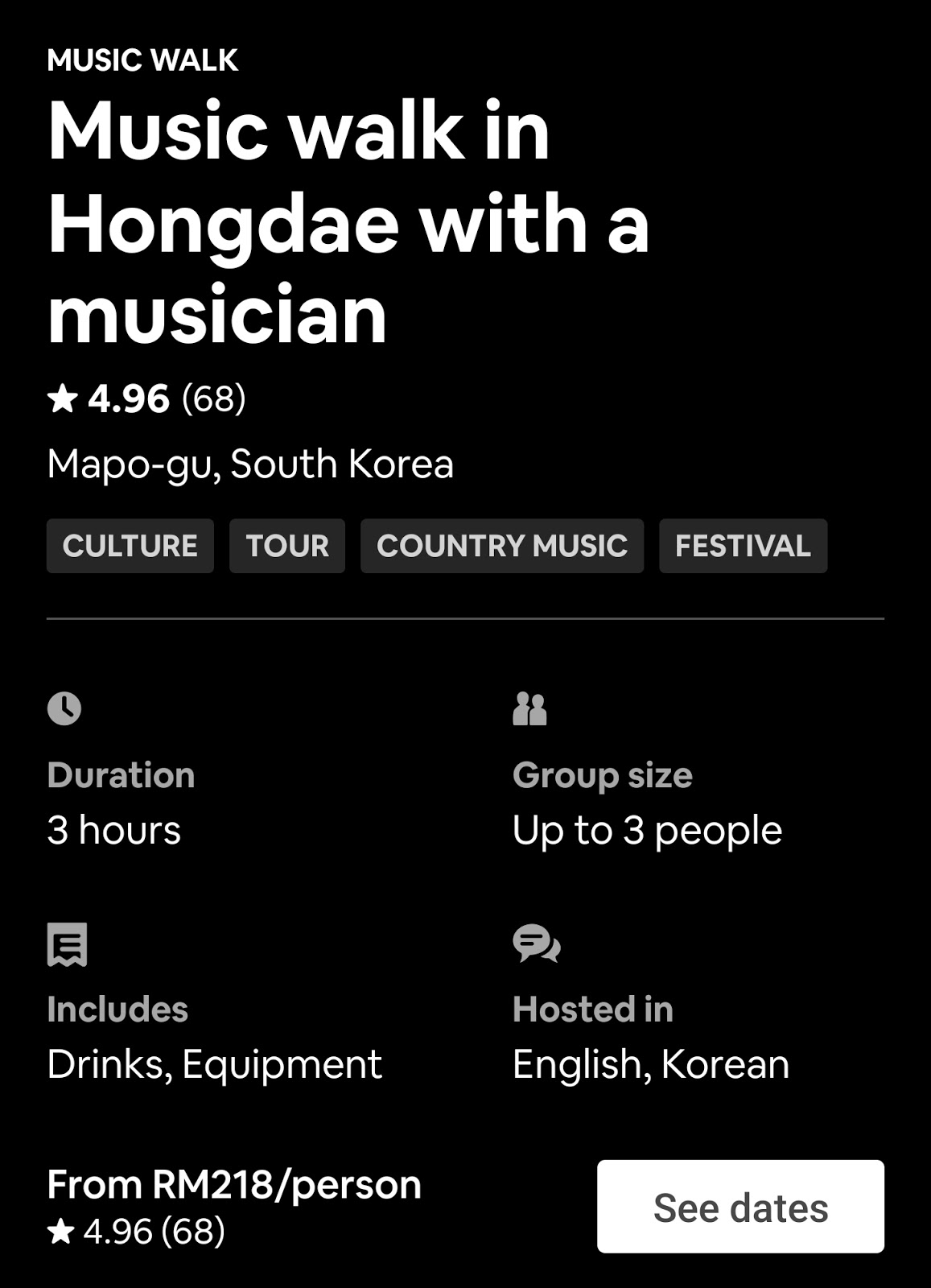 It sounds so perfect and so romantic, in the art sense of course. And so I signed up almost immediately.

I had wanted to go to Hongdae anyway to listen to buskers and get into the music scene there.

And I was really looking forward to this.

My session with the musician is supposed to be at 1:00pm. But I did not have enough sleep last night because someone's alarm went off at 6:30am and I was up since then.

But since I didn't have any plans to go anywhere in the morning, I decided to just go chill out in a cafe.

I got off at the Hongik University subway station and arrived at the Gyeongui Line Book Street. The "line" was supposed to be a train track line, which was dismantled and they built bookstores along the way making it a book street. 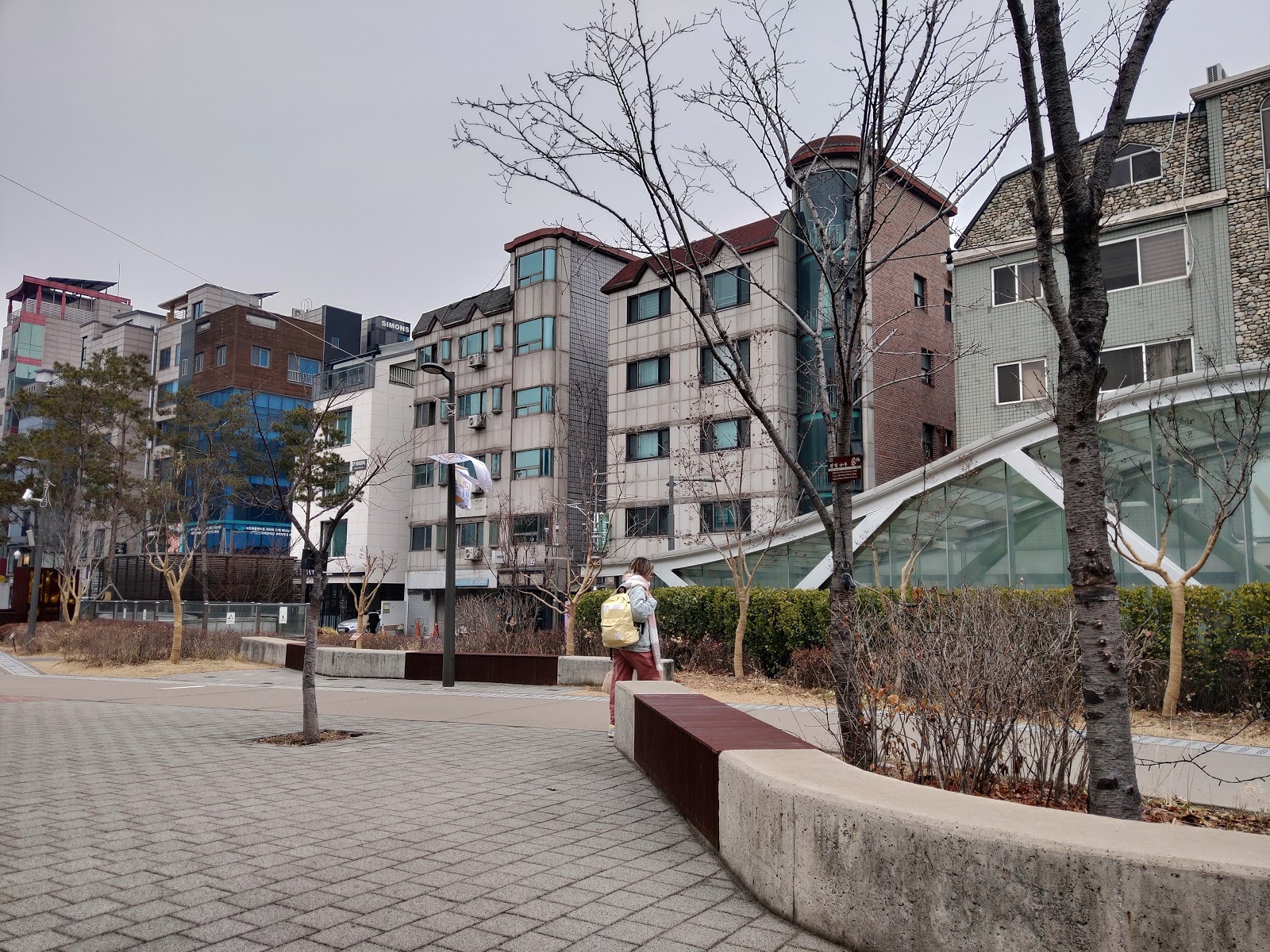 I walked across the road and settled in Abiachae cafe to have an Americano. 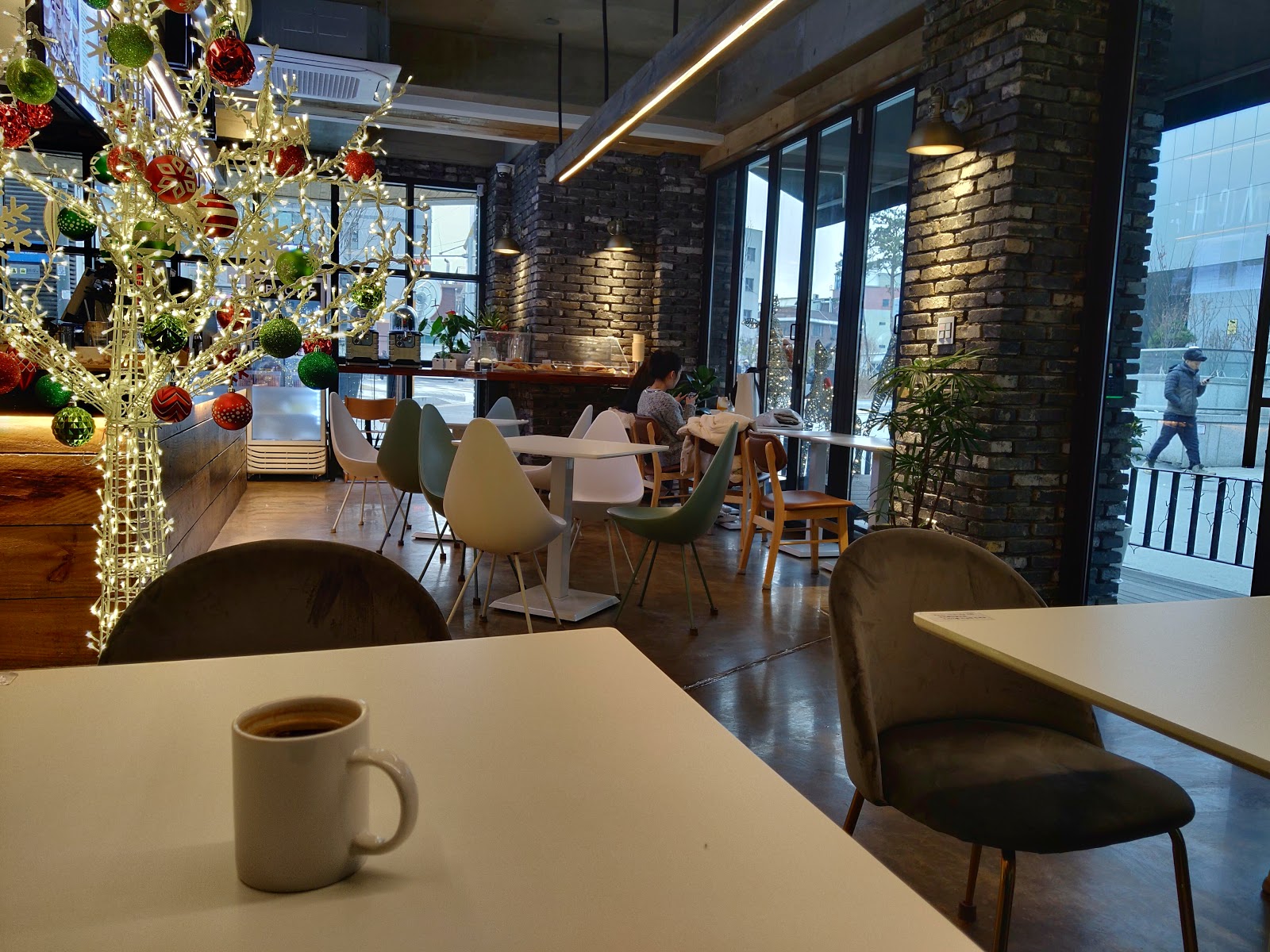 I caught up on my reading and the music in the cafe was also quite good. I was even able to Shazam a few good songs. 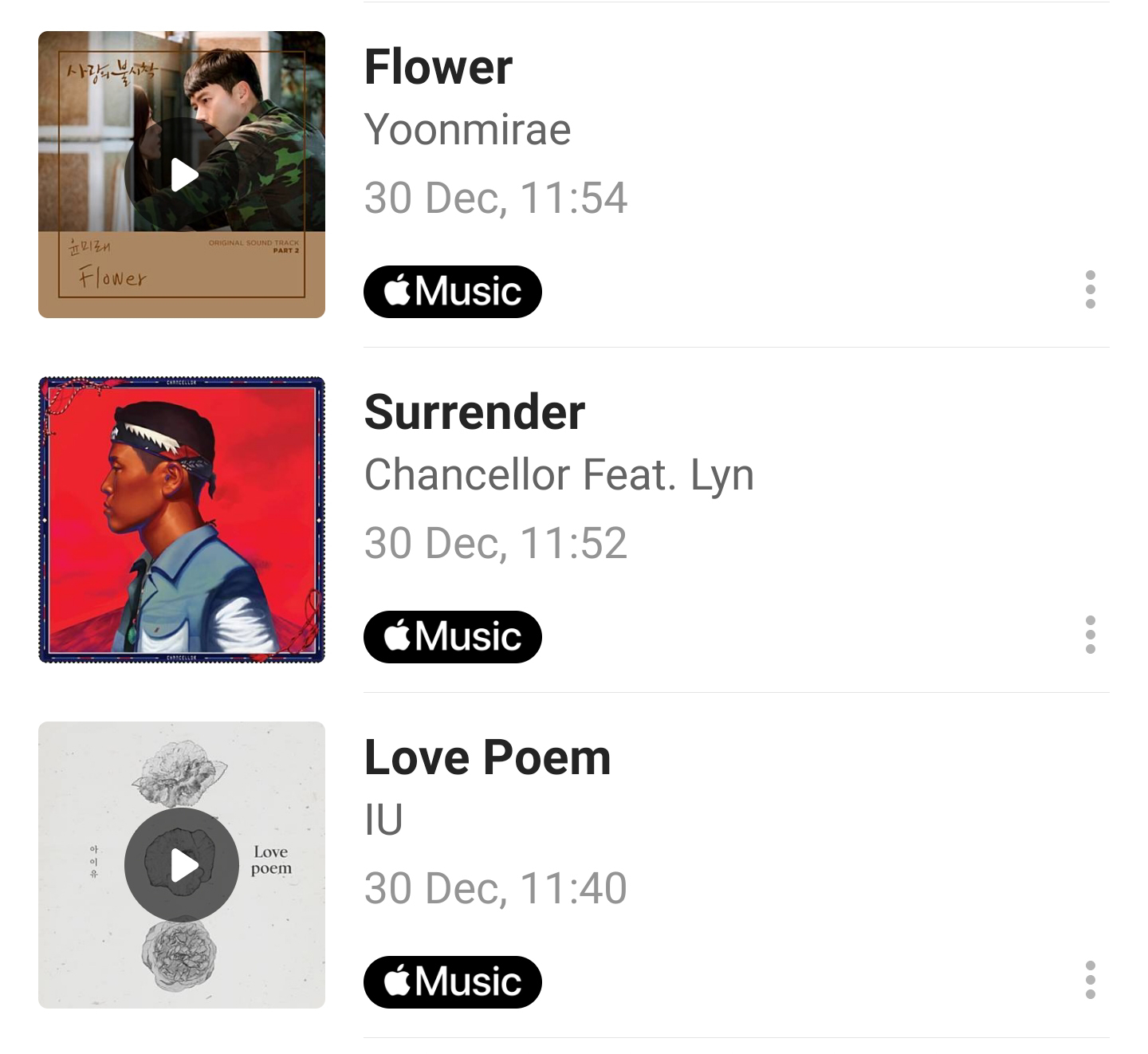 I fell in love with IU's Love Poem. I just checked the lyrics...quite deep. And oh, it's her newest song.

Zozno the musician arrived at the cafe sharp at 1:00pm and we started off with the music walk. We first stopped by this cafe called the Unplugged. 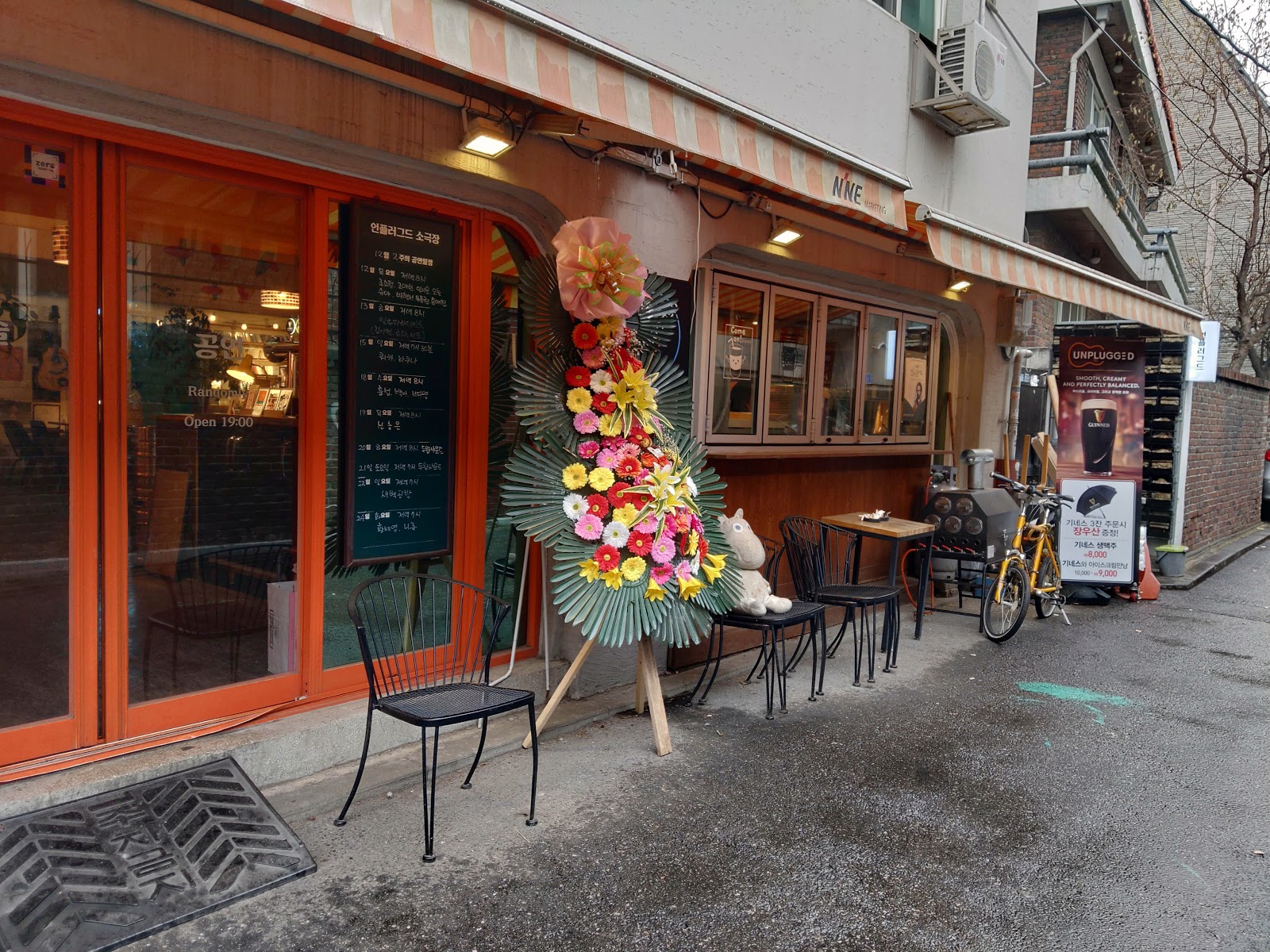 This is one of the cafes that musicians who desires to start their career in music go to. In Unplugged they can freely play their instruments and engaged with other musicians. They might even find members to start a band from there.

And exactly that, Zozno said that some of such musicians do release albums and they would present or dedicate them to Unplugged's manager who supported them while they were exploring their talents in the cafe.

Zozno asked me to pick one from a stack of such album and I picked this one by Mind Attic. Why did I pick it? I was captivated by the group's name. 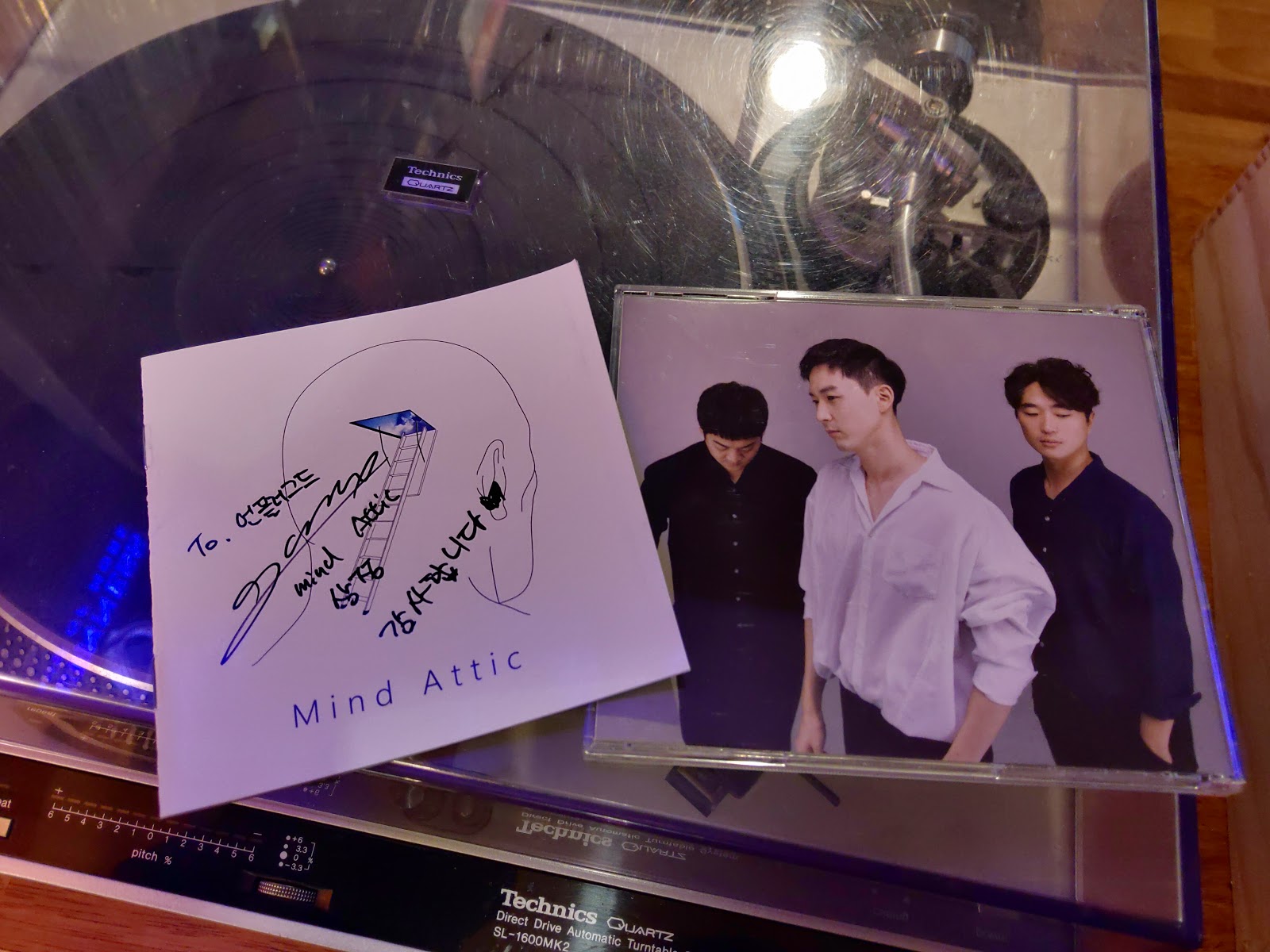 The cafe also has a small concert hall in the basement where musicians can take part in open mic sessions or even have their own concerts if they can garner enough fans. 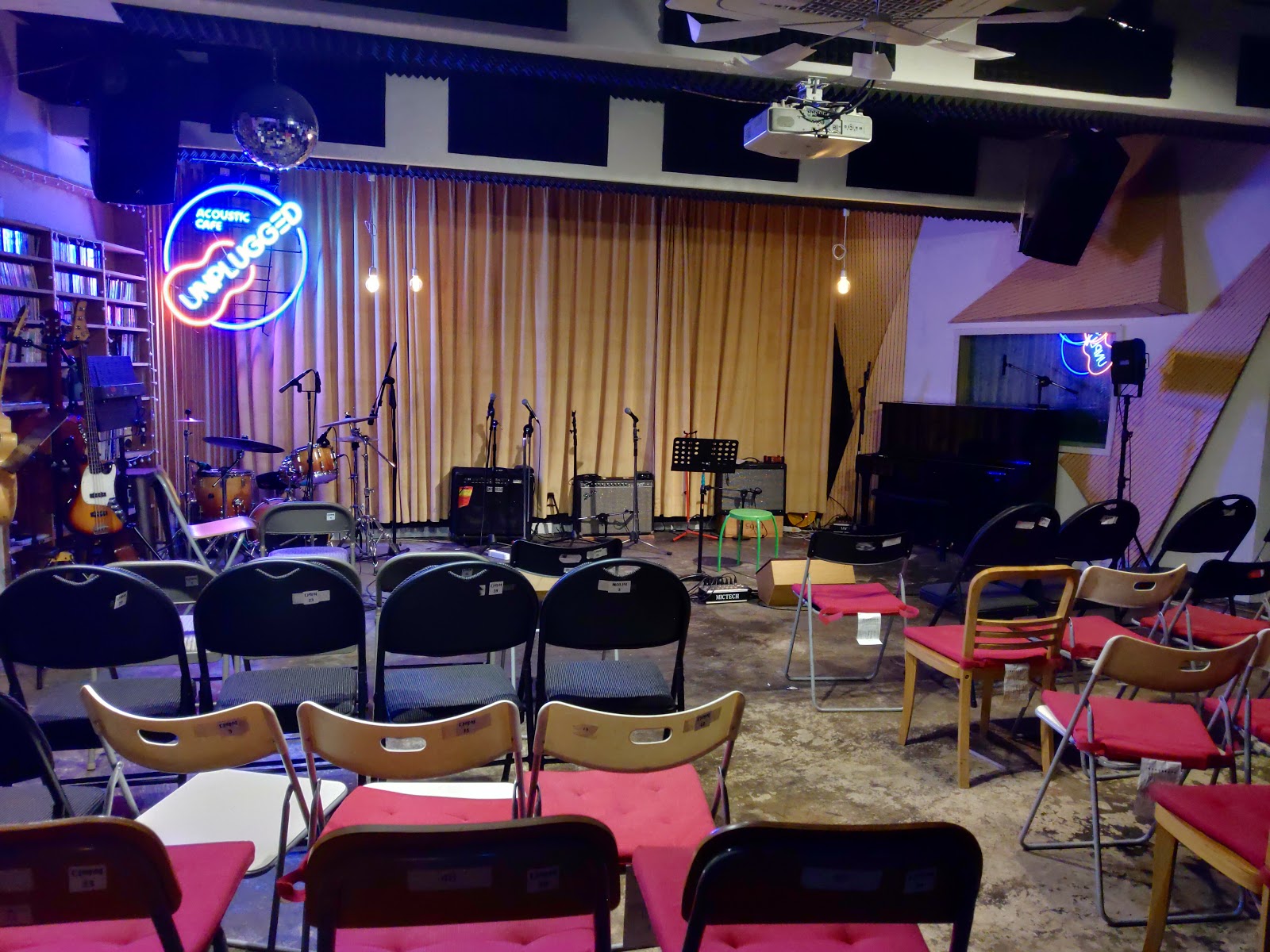 Next Zozno brought me to Magic Strawberry Sound, a music production house for independent musicians. From the list of artistes or groups listed on the wall, I only know 10cm. I need to check the rest out...oh I just checked and I do have a song by Cloud. 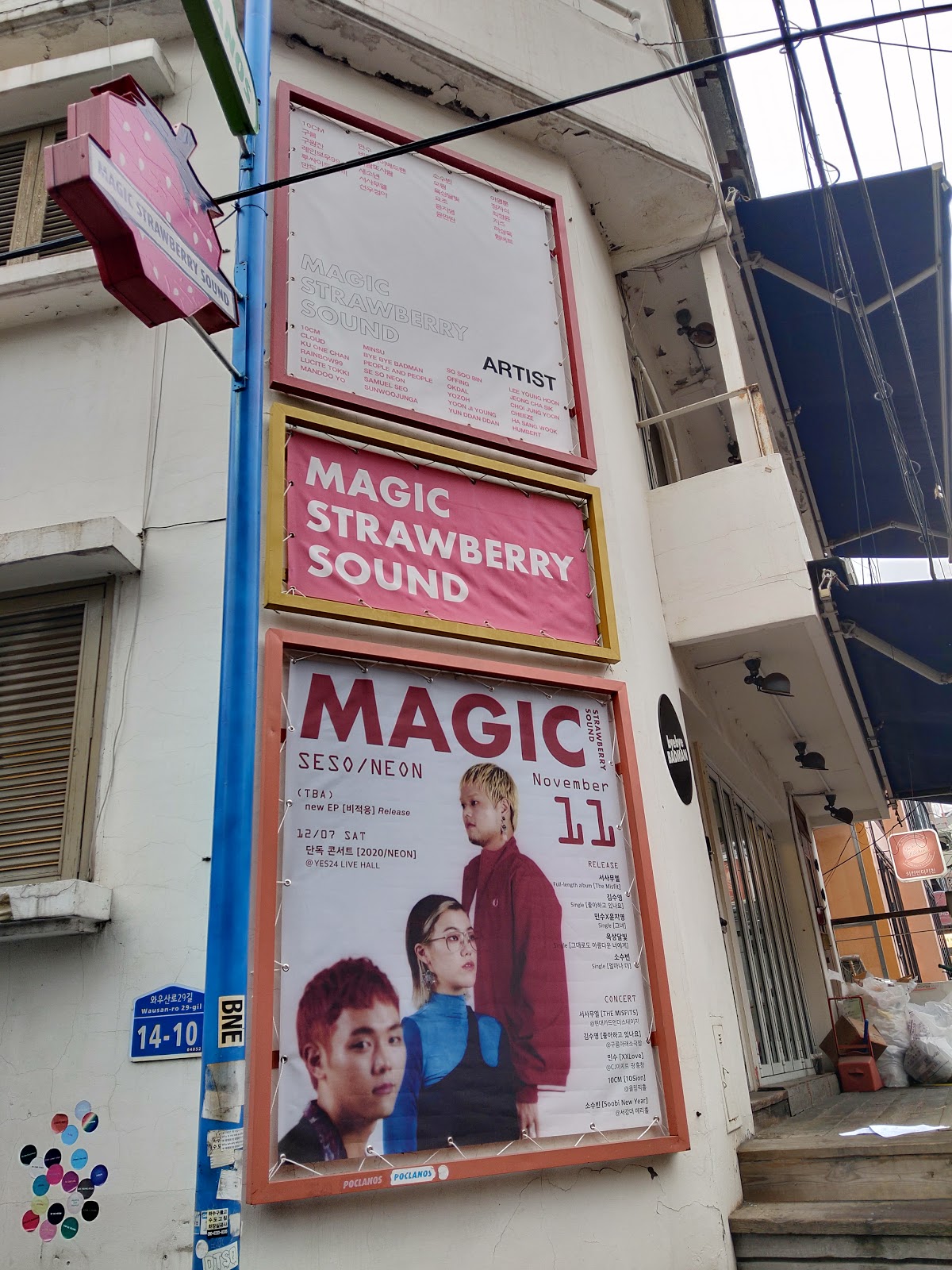 Then we made our way to his own studio where he shared his story of how he began as a musician in an independent band call 좋아서하는밴드 or in short Joaband.

He told me his story of how they began their journey as street musicians, how they grew and how they released their albums, and how they engaged with their fans.

He then asked me what kind of instruments do I play, which is nothing! Haha. I said I used to play the piano and cello but "used to" is the keyword here.

You could sing, he said since I did tell him I am in a choral group. Off the cuff, I suddenly have no idea what to sing! I haven't thought about but it dawned on me to check my playlist. So he played the ukelele and I sang my three favourite songs from my playlist:

Sempurna - Andra and the Backbone

Then it's time for Zozno small little concert for me! 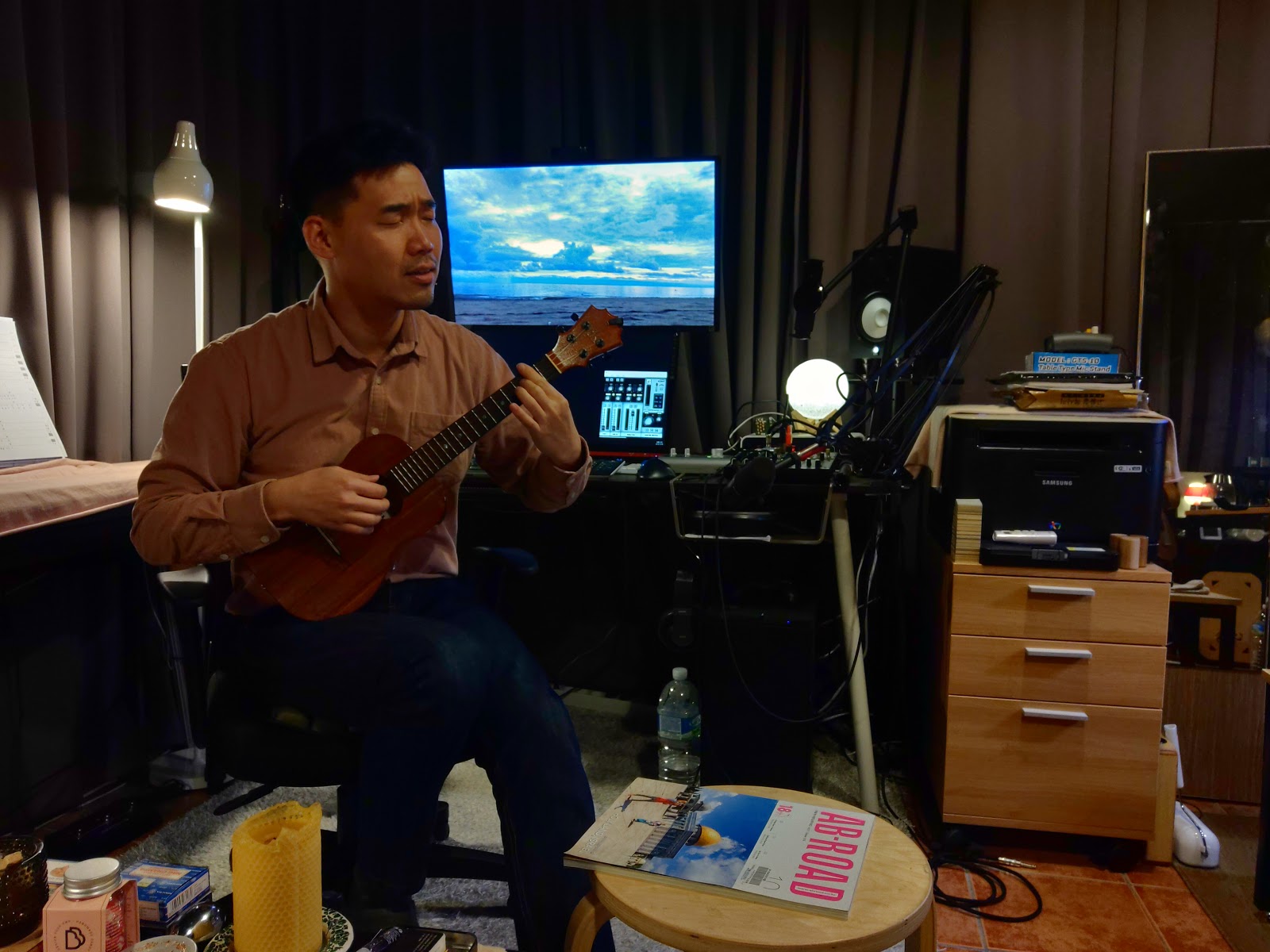 He told me the story and background of each song he sang and to me his songs are very down to earth and depicts the reality of life.

From his stories I learnt how much the life of a musician goes into their music and for singer songwriter their lyrics. I suppose that would be the difference between a singer songwriter and just a singer who sings.
Like this song titled Lilly, Zozno wrote and sang about making friends across different countries and because of these friends, the countries that didn't mean much to him now do.
릴리 Lilly - 조준호 Zozno

He also shared with me this video one of his friends made for his band, which he is no longer a part of by the way. And I really, really love this video.

The song is about Zozno who lived in a rooftop house and had so many memories there. But he had to leave because the place will be torn down. He was so sad that he had to leave it behind and was not even able to pass it on the next tenant to build his or her own memories.

The video storyboard spans the life of him from childhood to youth and adulthood.  Zozno appears in the end of the video singing with the band.

The last scene is where his matured grown-up self telling his young self that even though he had to leave, life has been okay to him grown up. He reassures him and his young self in the end smiles in much relief.

Very well done! I would love to meet the music video producer.

I finished the music walk and concert and Zozno walked me back to Hongdae where he showed me places where buskers will sing.

But it was still daylight and obviously there wasn't any buskers yet. 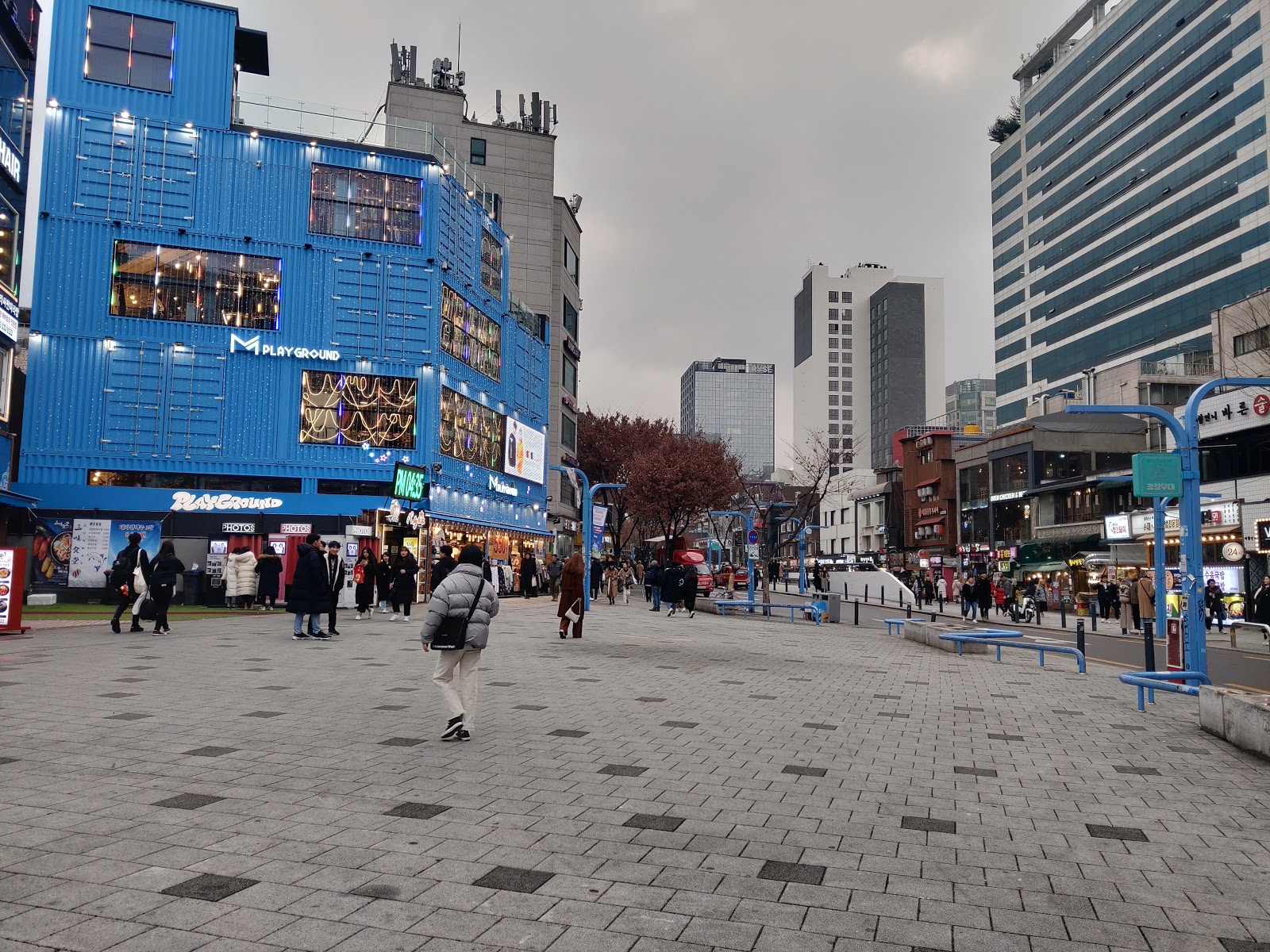 I wanted to have dinner but I wasn't too keen in the restaurants in that area which look very touristy and would probably not welcome a solo diner.

And so I settled for this small Burger 4.5 outlet which happens to serve really good burgers. I ordered one with lettuce, tomato, avodacado and wasabi and it tasted superb. 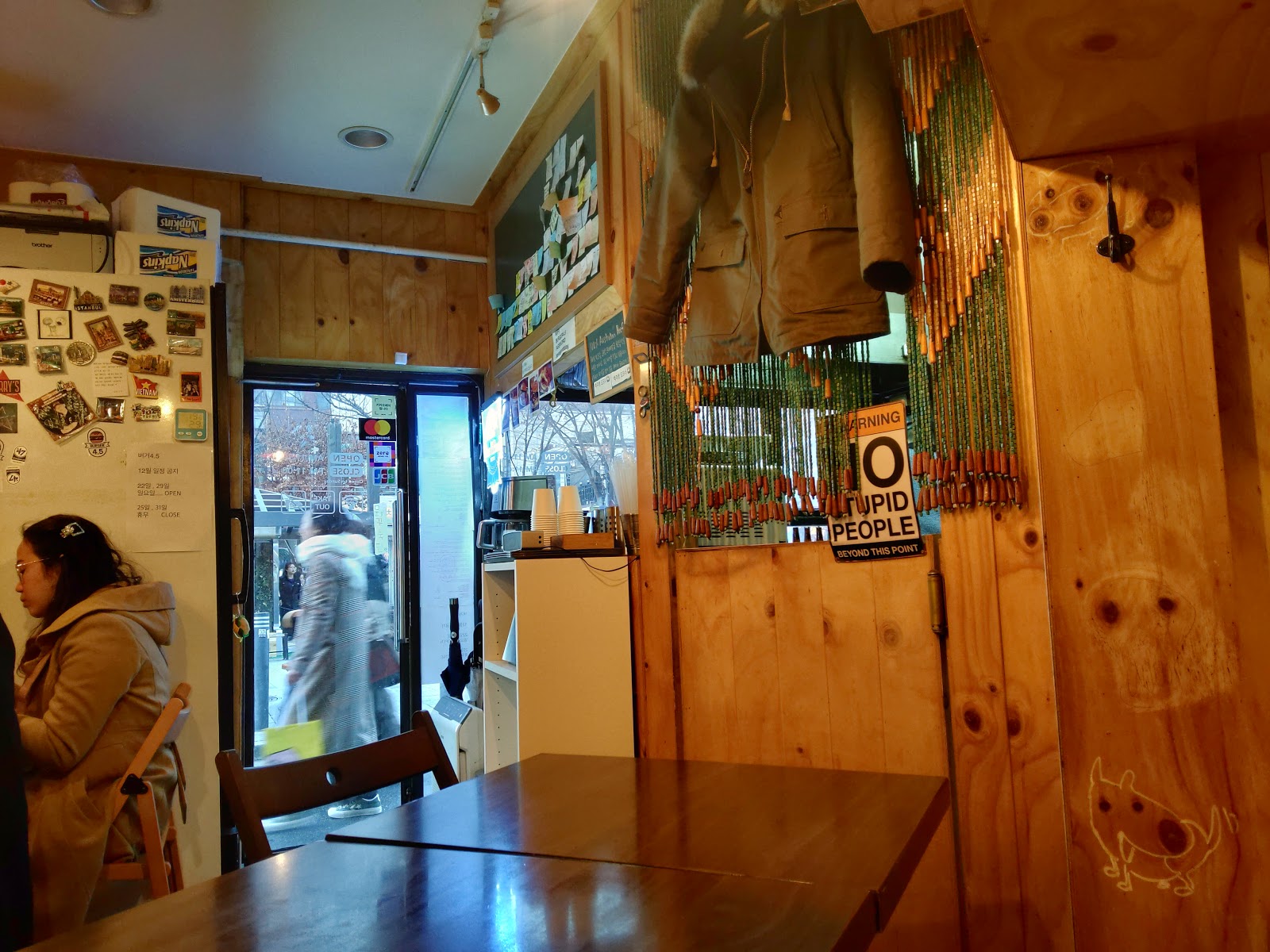 The sky turned dark but it was still early at 5:20pm! And I found only one busker singing solo. And he wasn't very good, being pitchy and all. 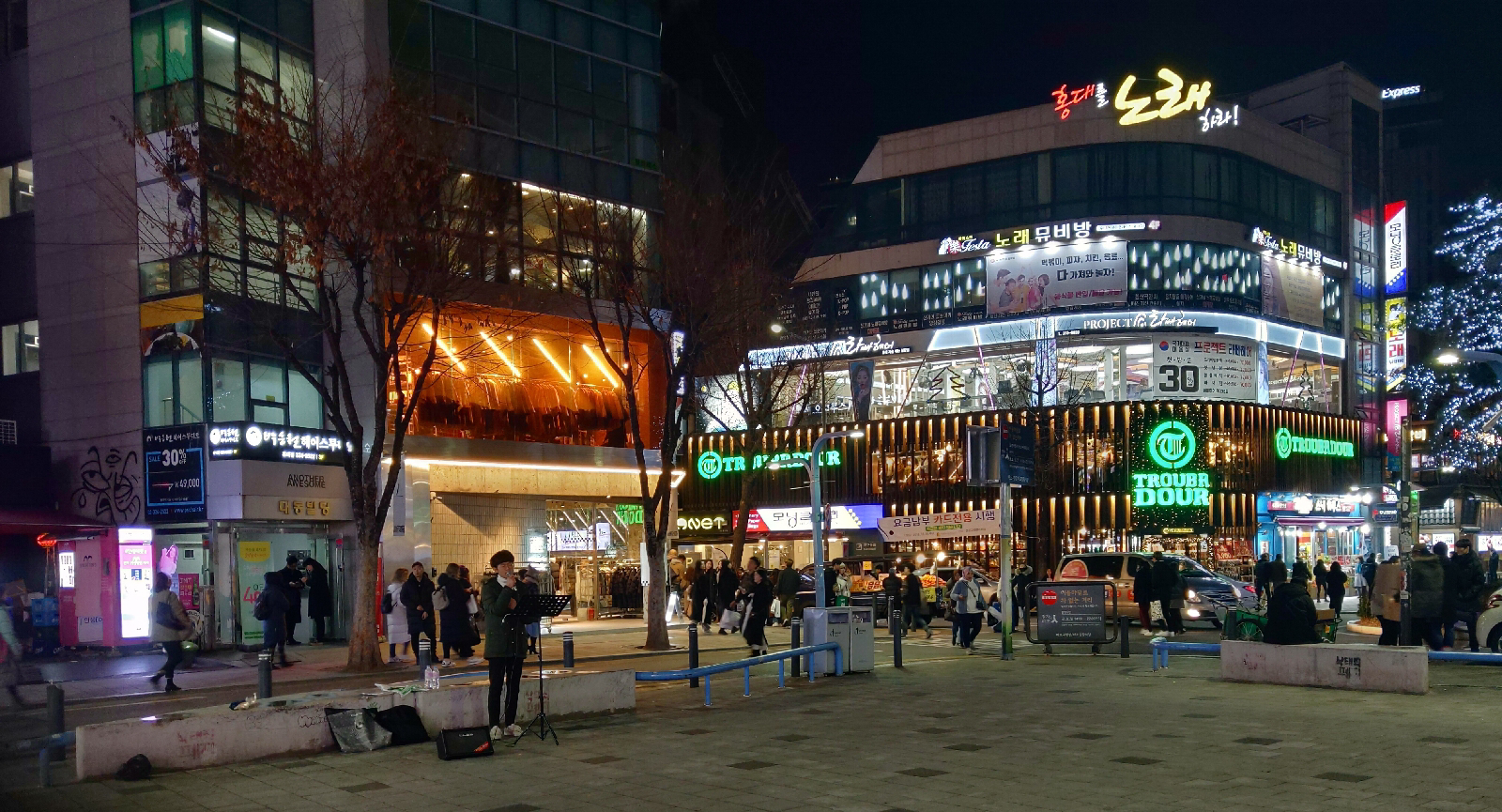 I find that it really takes a lot of courage to be busking. Even if you think you may be good enough, would the public think so?

I wouldn't be able to do it, but I think if given the chance and proper equipment, I might just try it.

By then I was really too tired and I decided not to wait anymore. It will probably take another 4 hours for the area to be active with buskers. I don't know. I didn't think I can survive the wait and so I headed home.

The word of the day?

It was a tiring but lovely day.