I signed up for another Airbnb experience session just before I flew to Seoul. I received another email from Airbnb with a list of stuff that might interest me and I thought this just might be a really good experience. 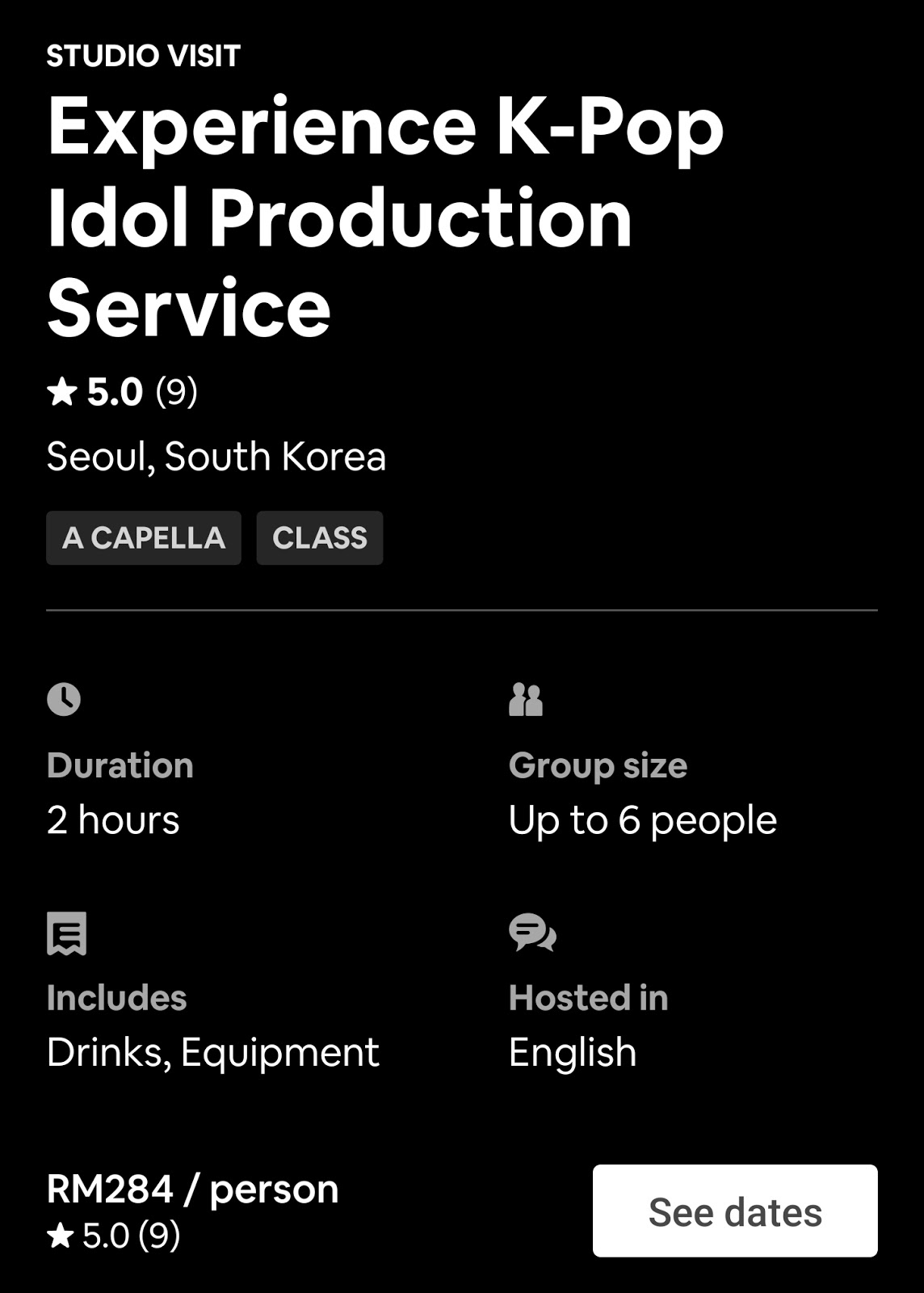 I listen to a lot of music. And I sing a lot all the time. Once a week in choral practice, once a week in church service and everyday in my car. I work out my vocal cords a lot!
And so I thought it would be interesting to experience firsthand how a song is recorded, mixed and produced.
It is an early session at 10:00am in the morning and so I got up early and started off as early as 8:30am, but the studio is quite a distance from my hostel and quite a walk from the subway station too. While I was walking there from the station, I was worried I'd get lost.
But thankfully I didn't and here I am at King Studio, and just in time too. 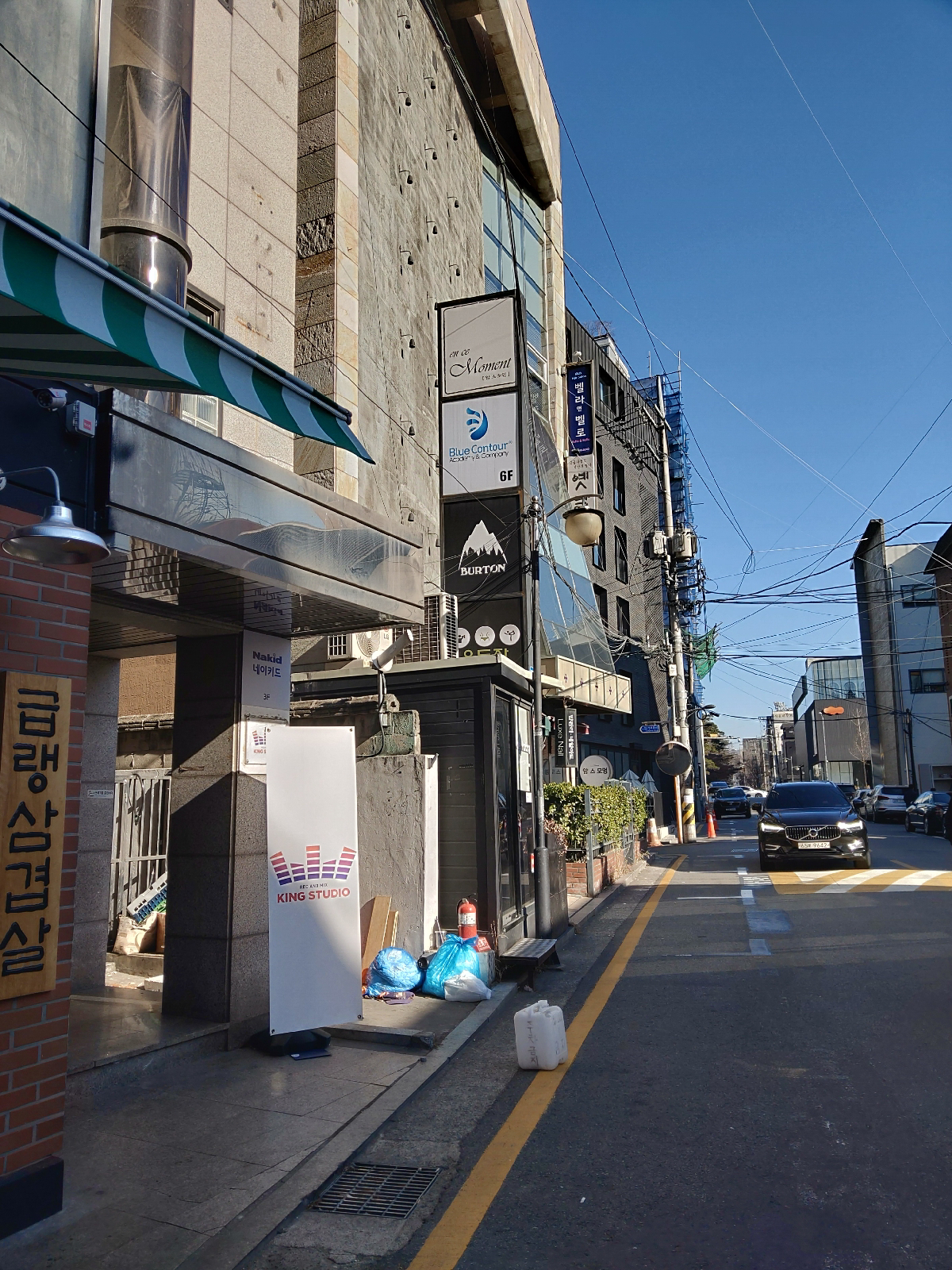 I was greeted by three gentlemen. Kingsman, the owner of the studio, Wildy his intern from Indonesia who interpreted all the Korean into English for me and Lee Jae Won, the photographer.
Not bad eh? I even get my own photographer for the session to take all the photos for me.

Here is Wildy introducing me to the work King Studio has done. They have done quite a lot for the entertainment industry for artistes including Jang Na Ra, Jung Eun-ji, Seo In-guk and VIXX. 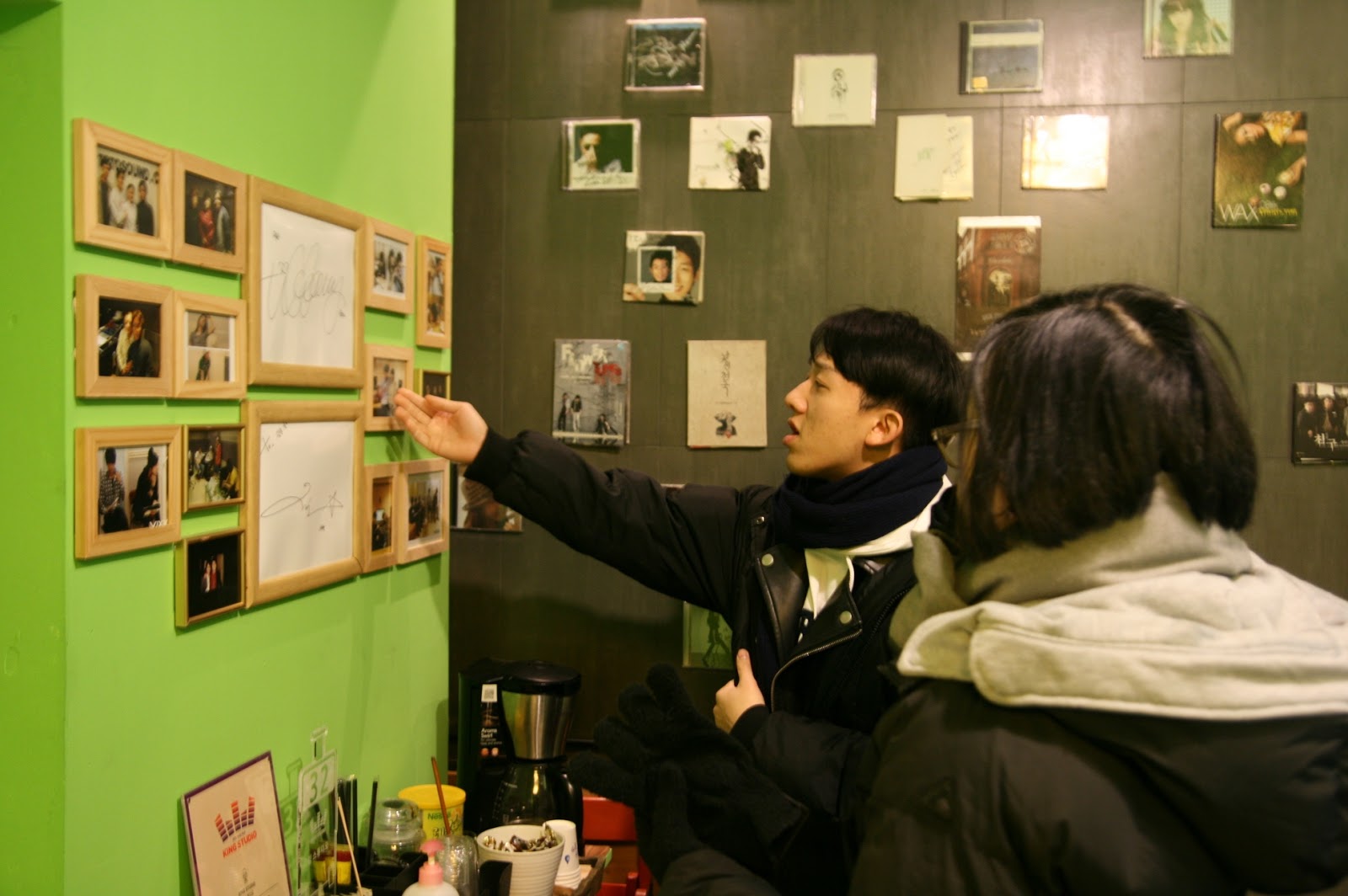 Then we walk into the studio. It's a small but cozy place. Their equipment is all there where the recording and mixing are done. The recording room is on the left. 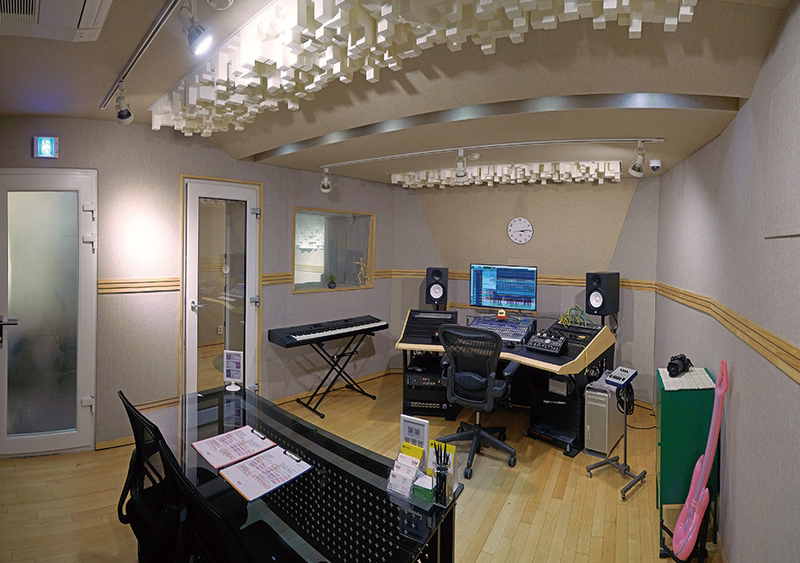 The session has its prefixed songs featured for every different day of the week. With me signing up for a Tuesday session, it's Blackpink's As if it's Your Last.
But if you zoom into this picture below, while the lyrics provided to me on the clipboard is Blackpink's one, the song on the screen is BTS's Springday. And by the way, that's Kingsman behind all the machines. 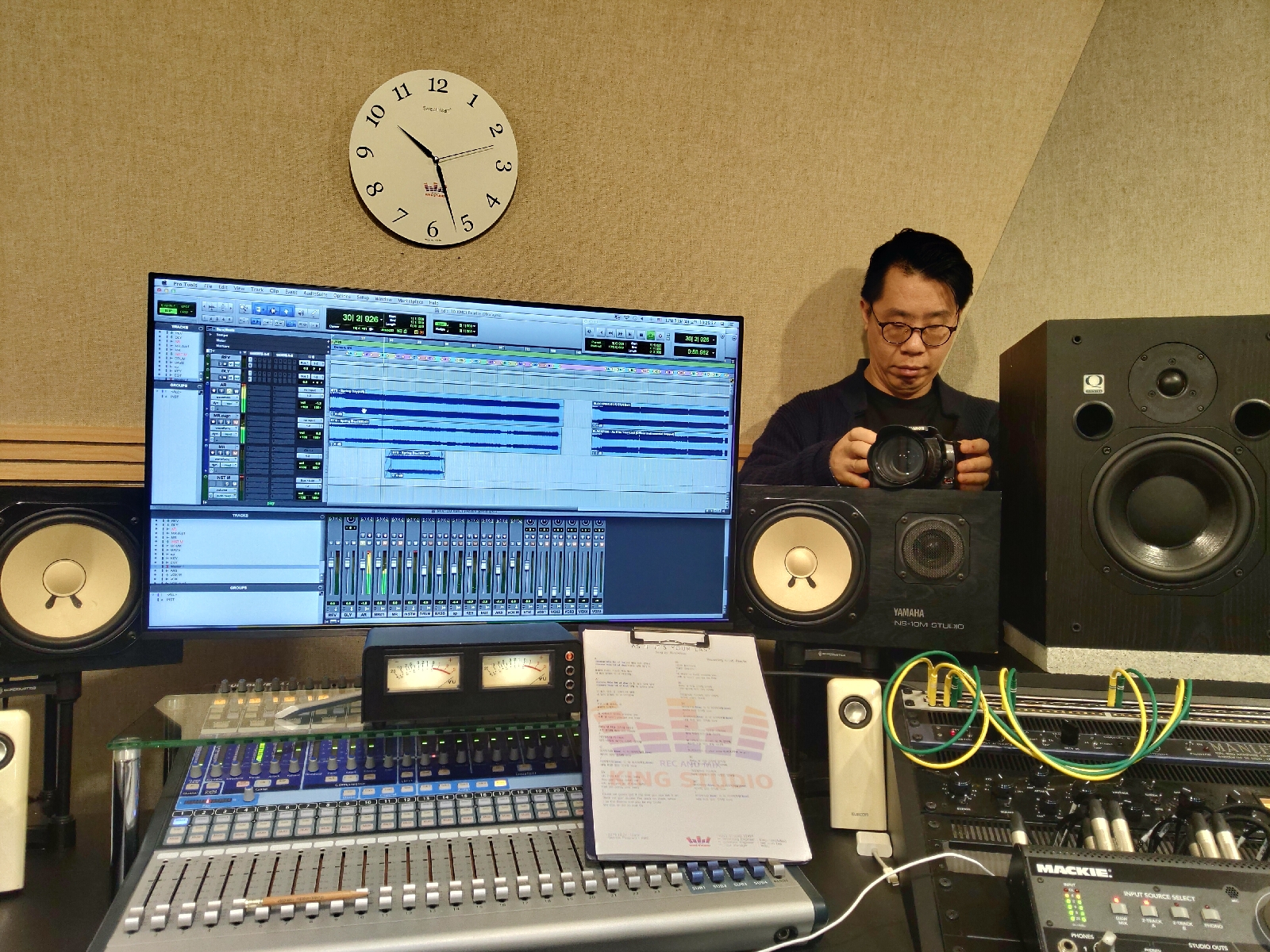 So I asked since I'm the only one, can I do the song by BTS instead of Blackpink as I'm more familiar with it. They agreed and I was happy. 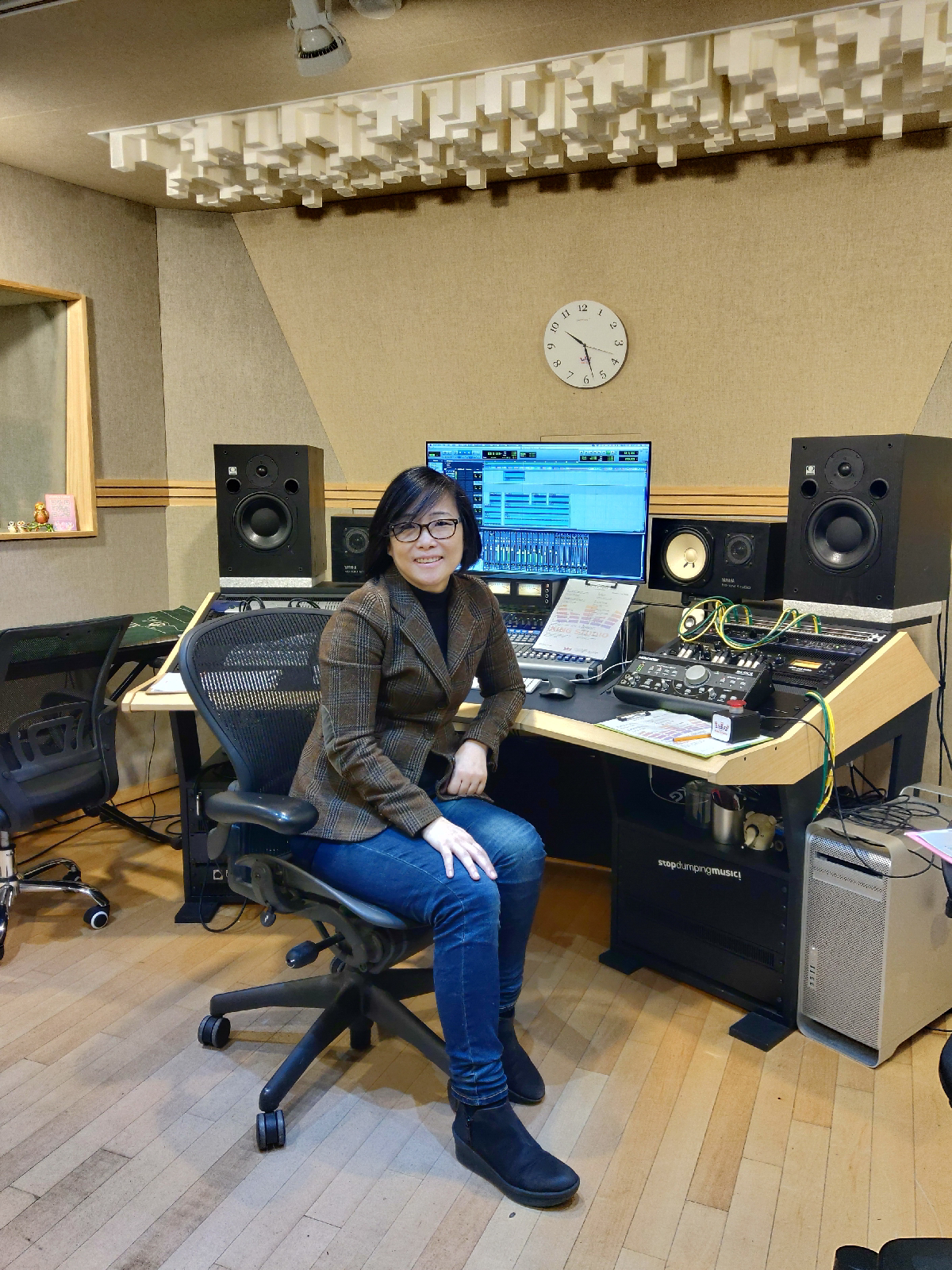 So here I am, still in the studio, practicing and familiarising myself with the song. 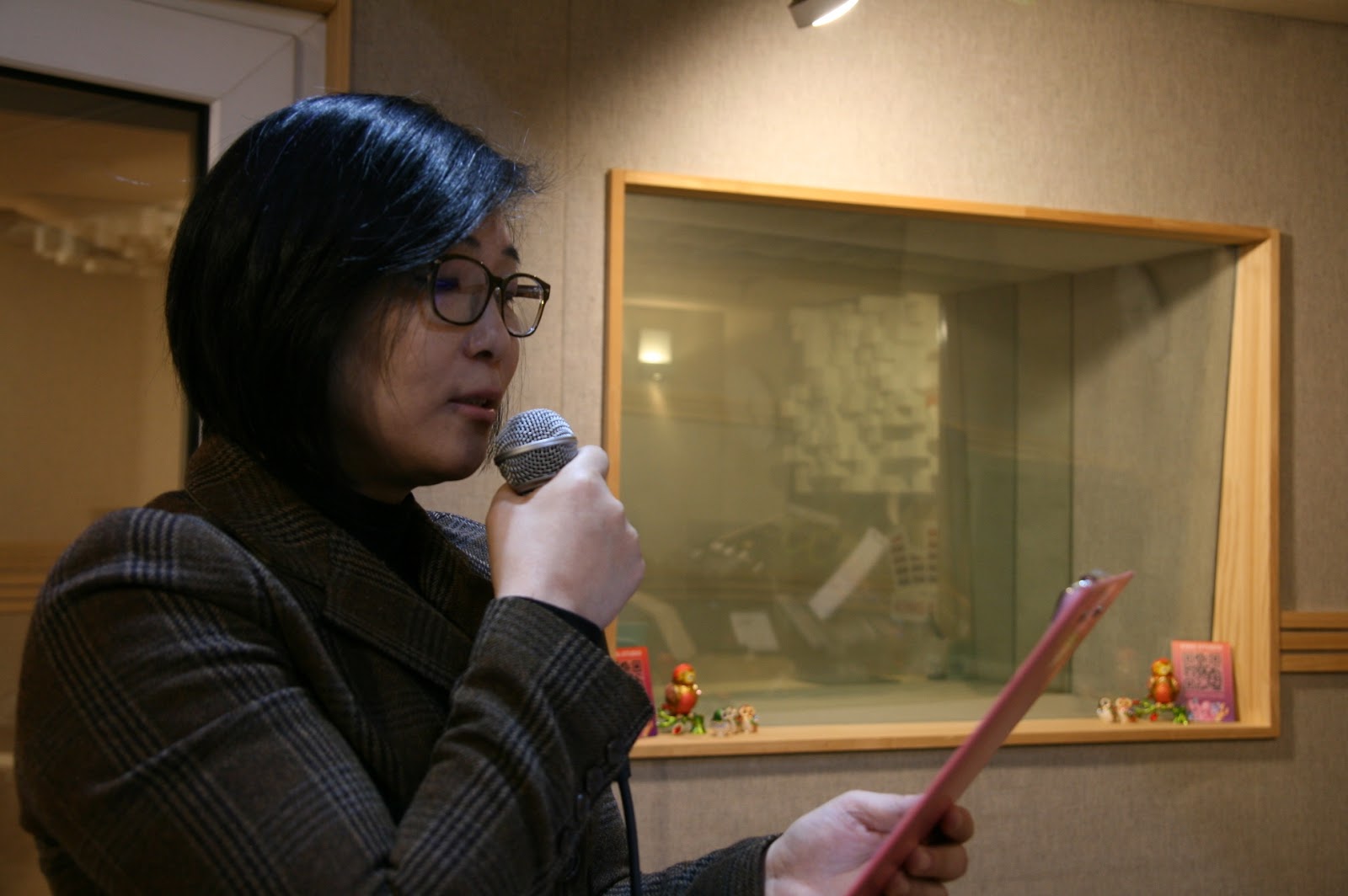 After which, I got into the recording room. I really like this room! I feel so comfortable in it.
I tested the mic listening to my own voice and Kingsman asked me how I felt listening to it. I said, it's ok. He remarked that most people would find it uneasy listening to their own voice. I told him that I hated listening to my voice that I recorded using my phone but to me this sounded okay to me. 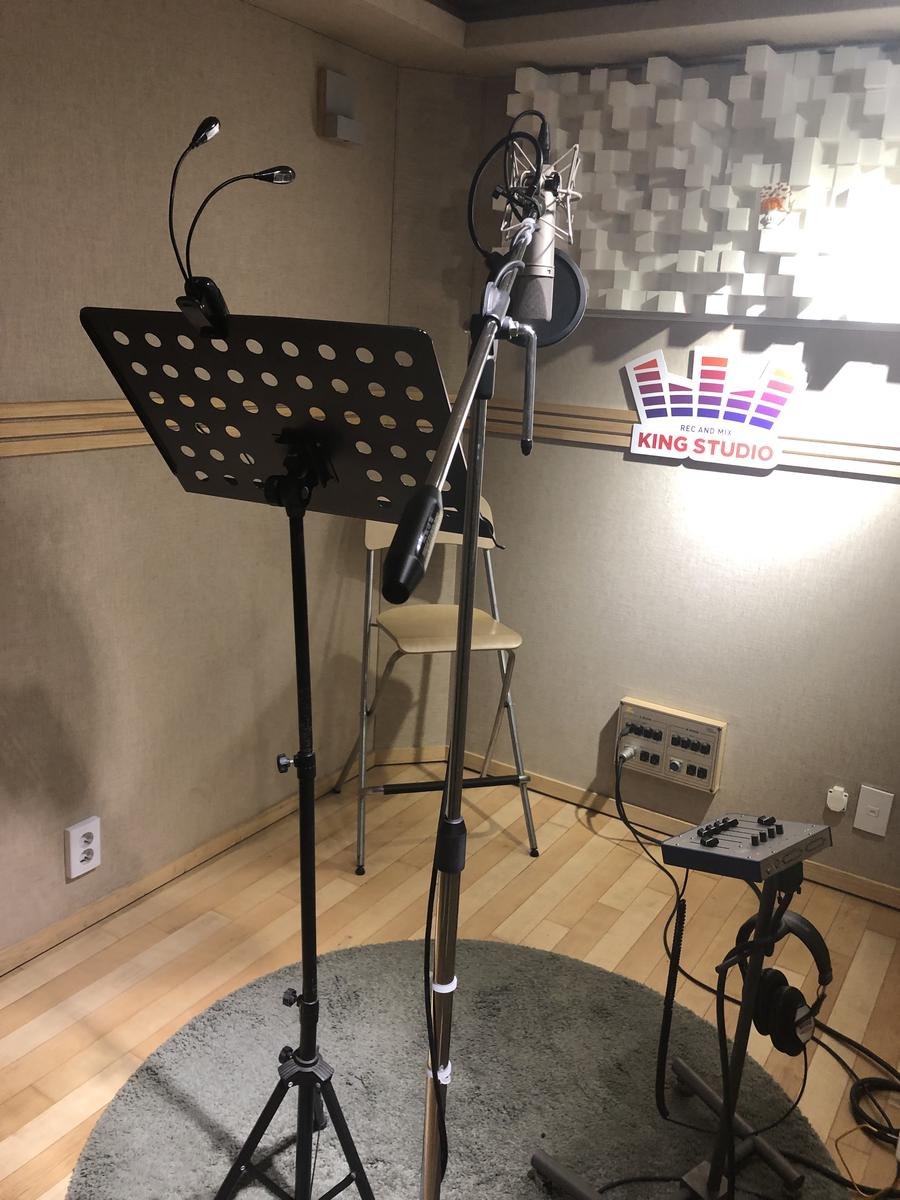 We began recording and here are the lyrics with my pencil marks, marking the parts I need attention on. It's a struggle to read it because it wasn't printed so clearly and I wish the font were larger! I also had some problems with pronunciation of the language and there is one line with such a complicated rhythm, at least for me, that I had to re-do it SO MANY times. But Kingsman and his team were so patient with me. Thanks guys. 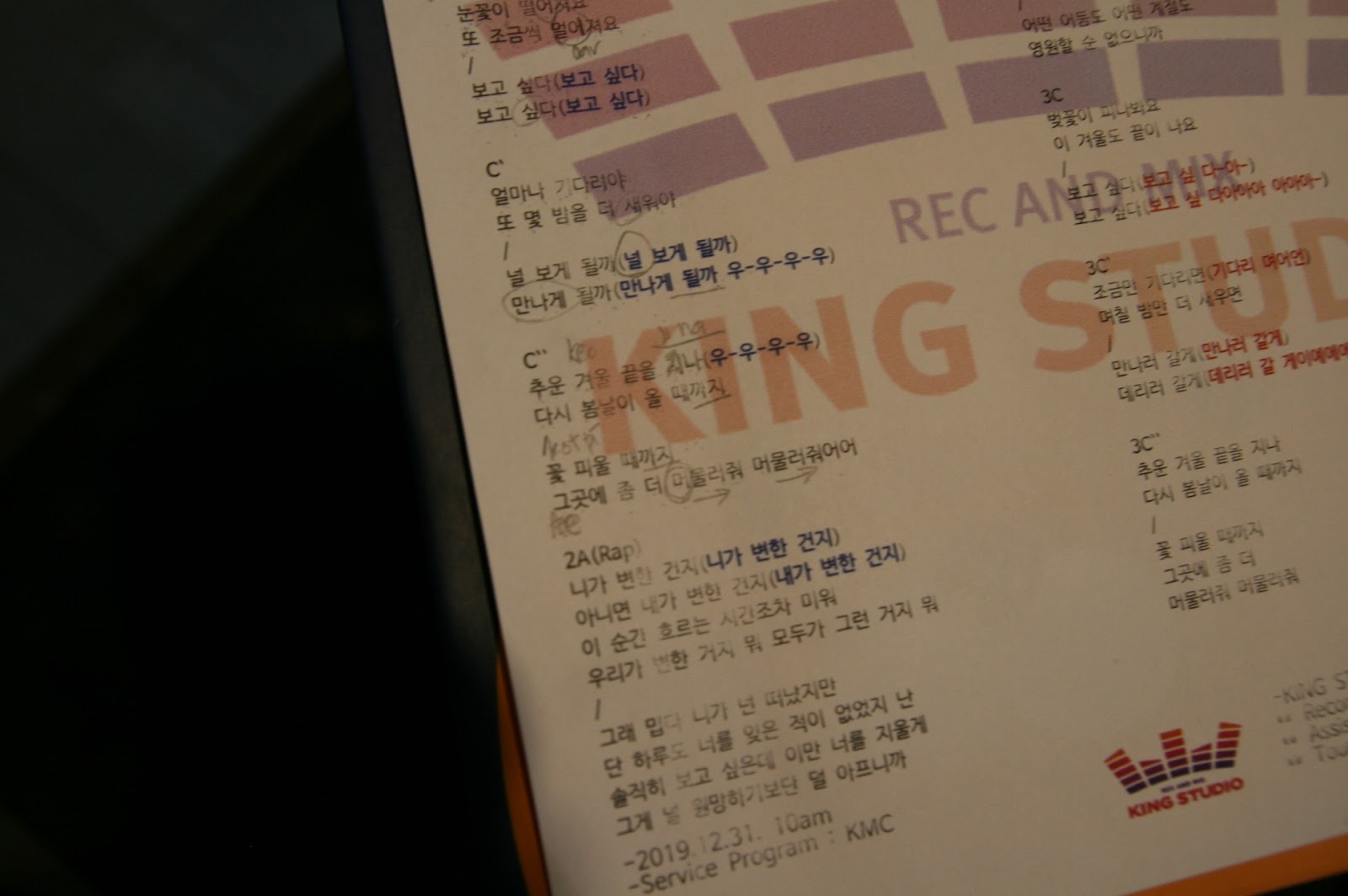 I needed to be one fist away from the pop filter and I obviously can't see the lyrics without holding it up. But I really like this photo. Haha. Just like a pro but not. 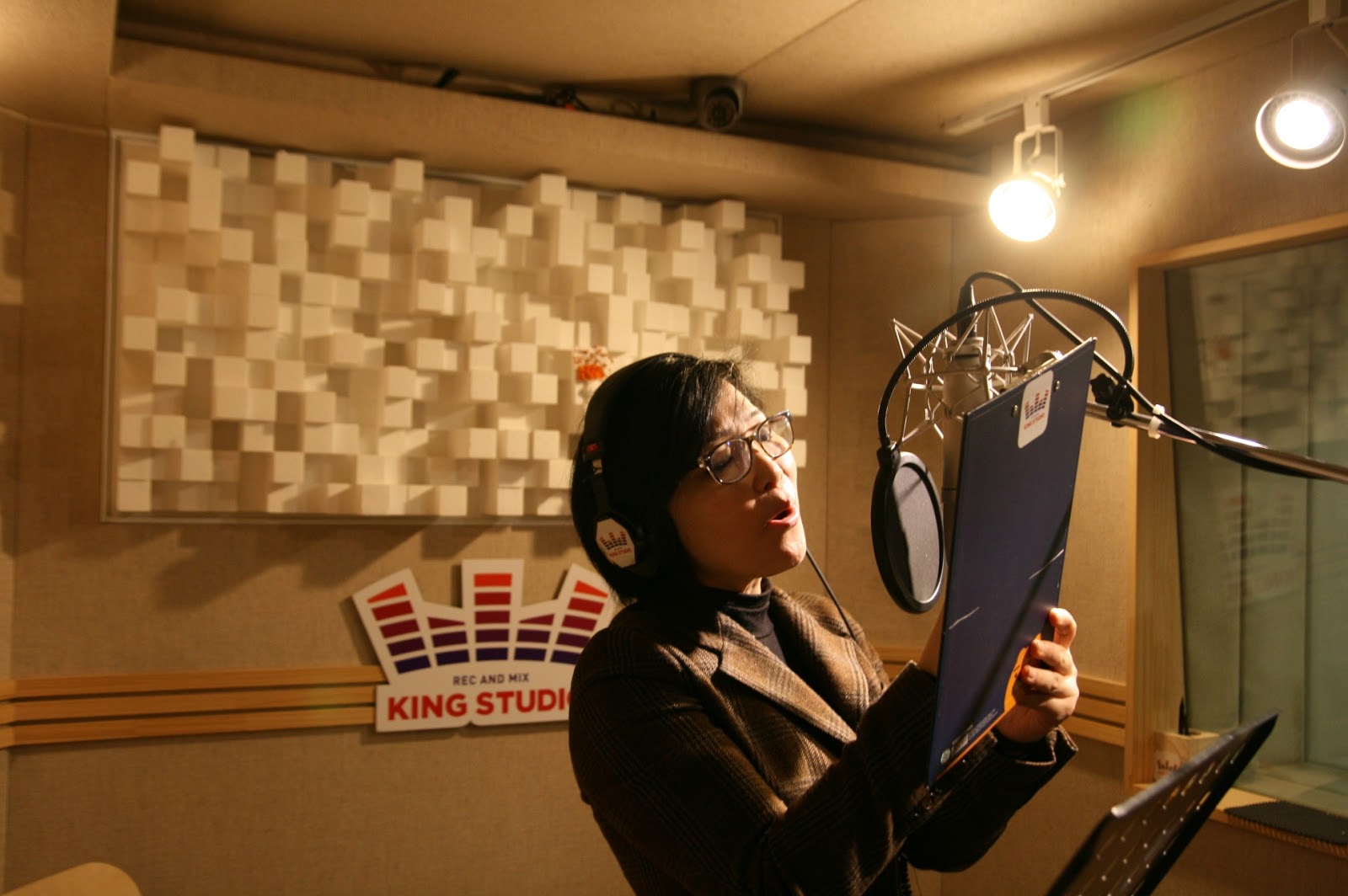 After recording, Kingsman explained and showed me how adjustments can be made where autotune is used to fix those pitchy problems. And I had so many of them. Haha. I asked if autotune is always used for all the professional recordings. Yes, he says, everyone needs it.
And that I find interesting. I thought the professionals would already be quite perfect. 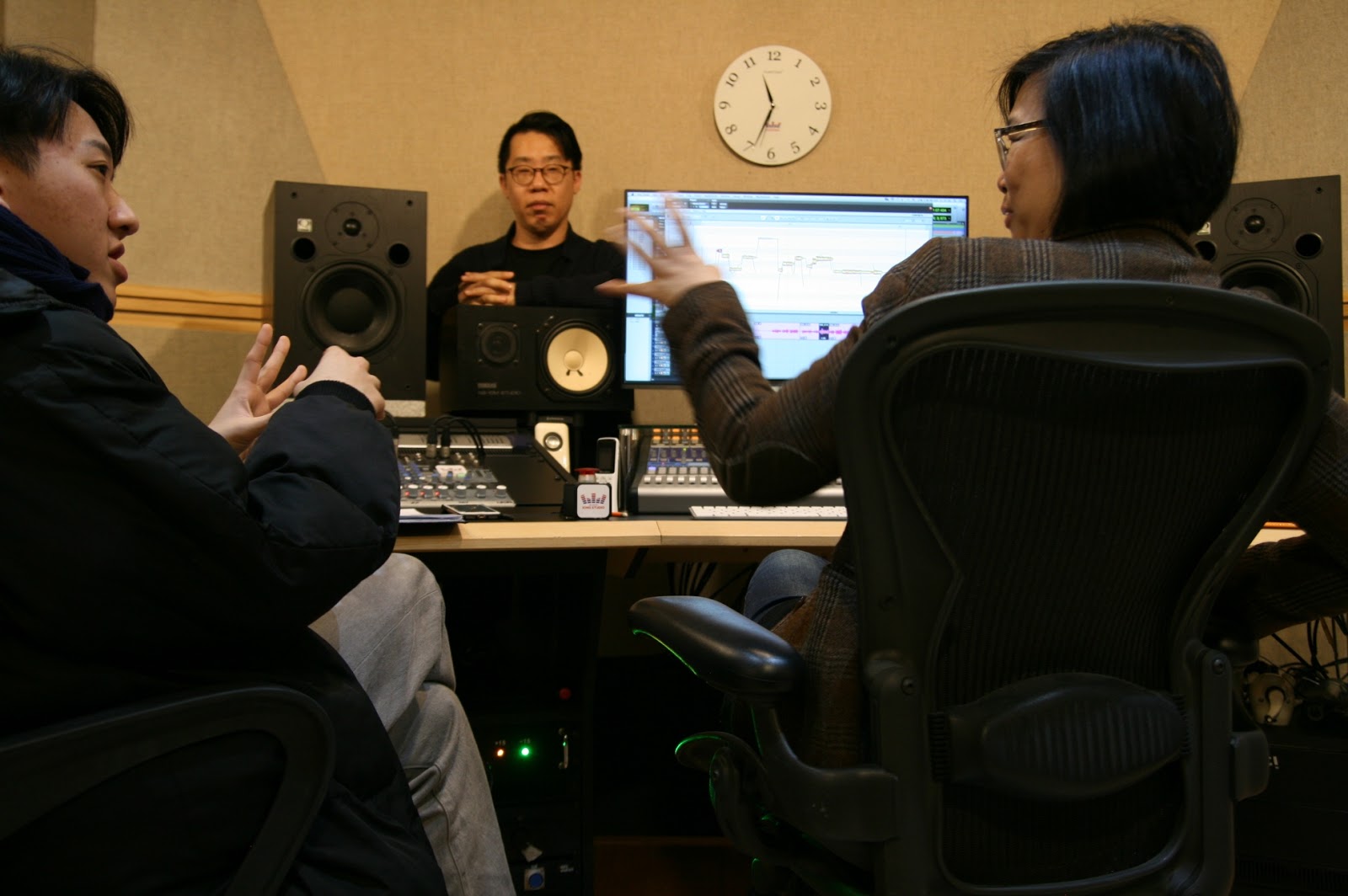 So here is what I have recorded. During the session when I heard it, I guess my mind was all over the place drinking in all the information and experience. I didn't really notice how I sang. Now that I listened to it, I think it's not good and I need A LOT of work on it.
But nonetheless, I find this is an accomplishment. I've recorded a song in a studio!!! And a Korean song at that! (Click on Listen in browser)
Now the studio even have a mugshot of me on the wall. 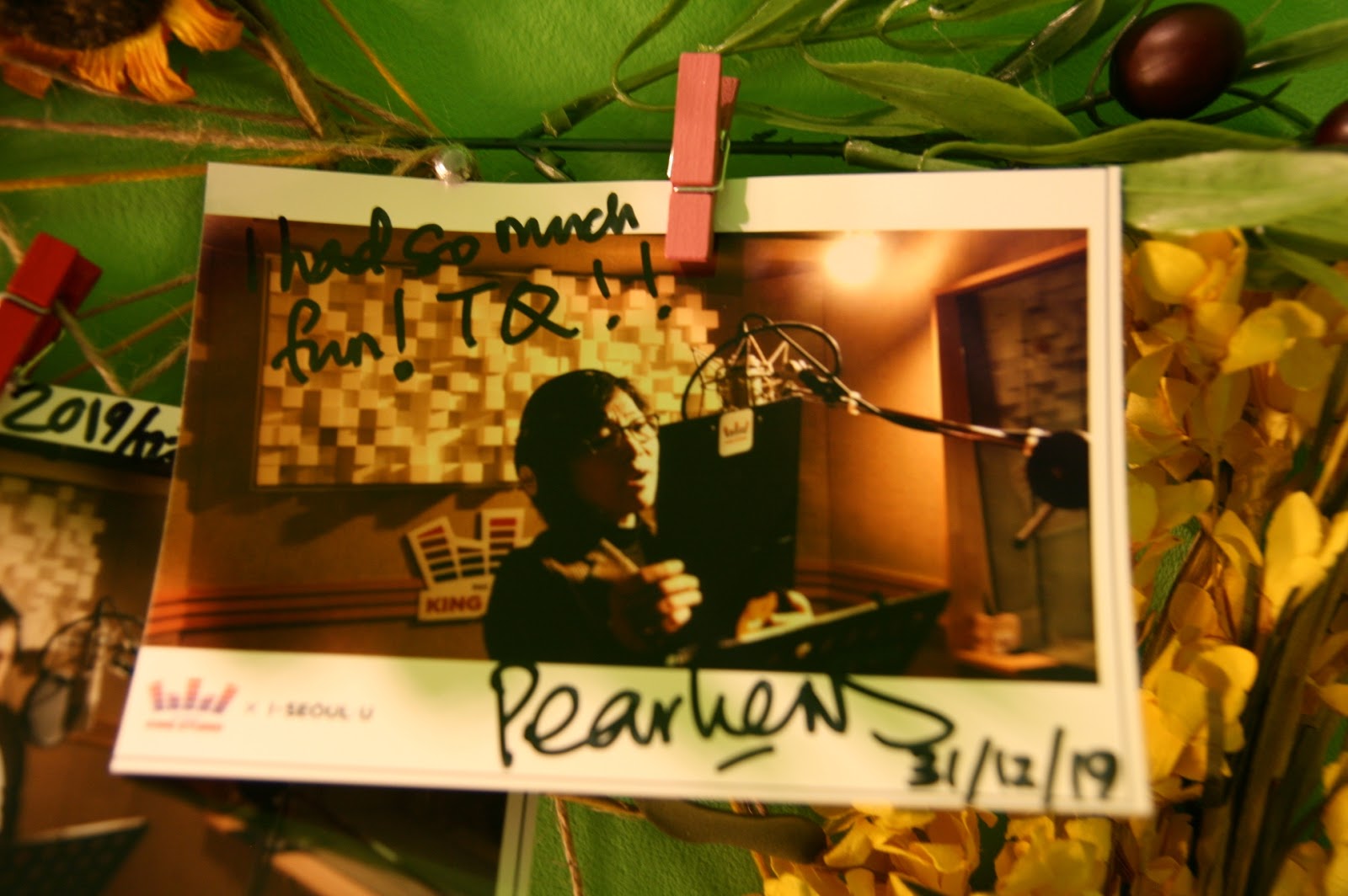 Thanks to the three cool guys: Kingsman, Wildy and Jae Won. It was a wonderful experience for me. I have really enjoyed myself. Thanks again! 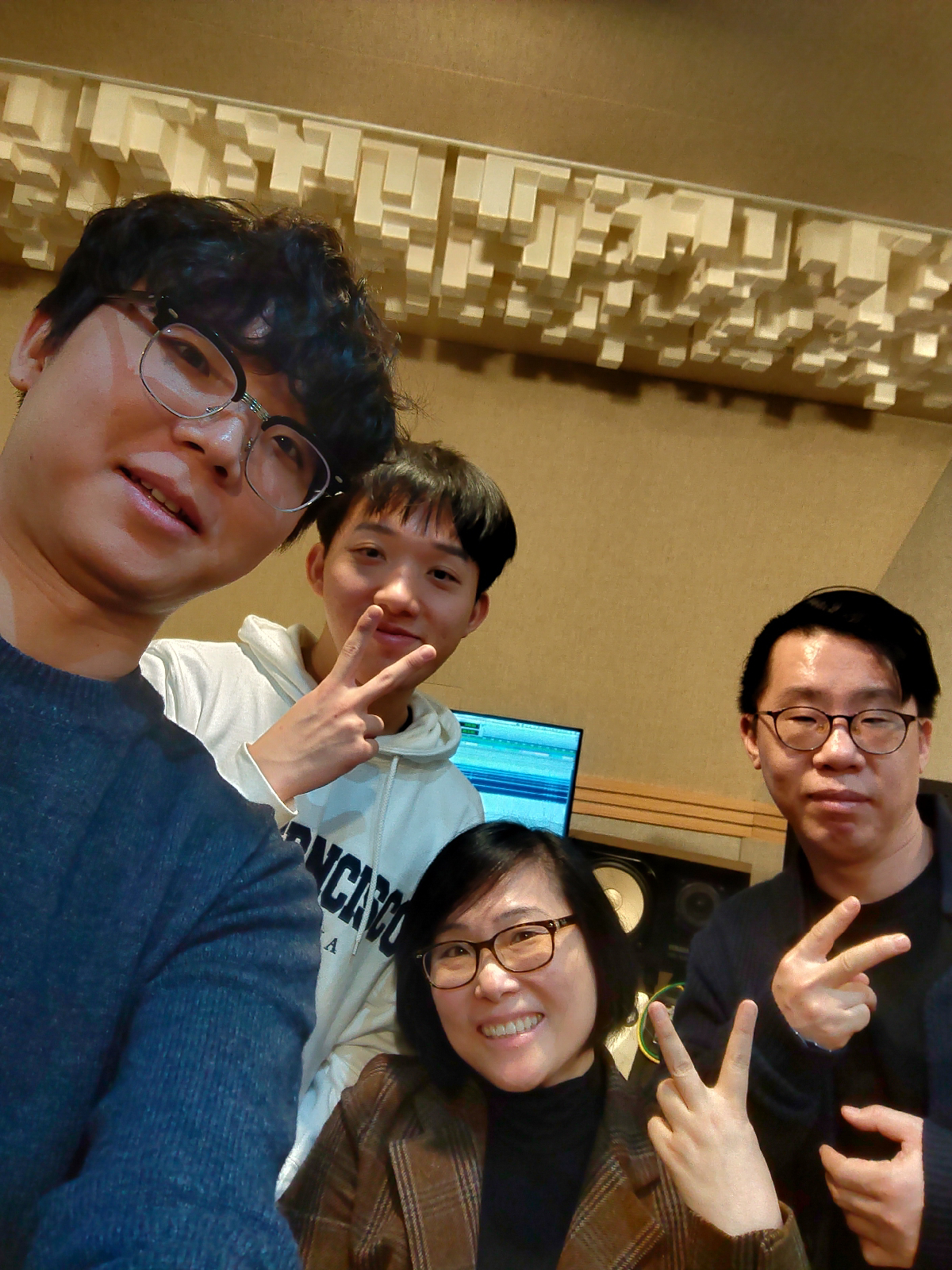 And I've decided that the word of the day is SPRINGDAY, the BTS song that I recorded today. By the way, it's a sad song pining for a lost love and while it's winter, he is looking out for spring to come. I have no lost love, and I like winter but I am going back to spring. Well, not really...more like year-long summer.
After that, I took the train to meet my new hostel room neighbor for lunch.
I must put a note here that when I'm in the subway in Seoul, it's an excellent place for people watching. The boys and girls all look so pretty. And this guy, I wished he had looked up. Haha. I accidentally had my phone flashlight turned on and he was the one who alerted me to it. Thank you! 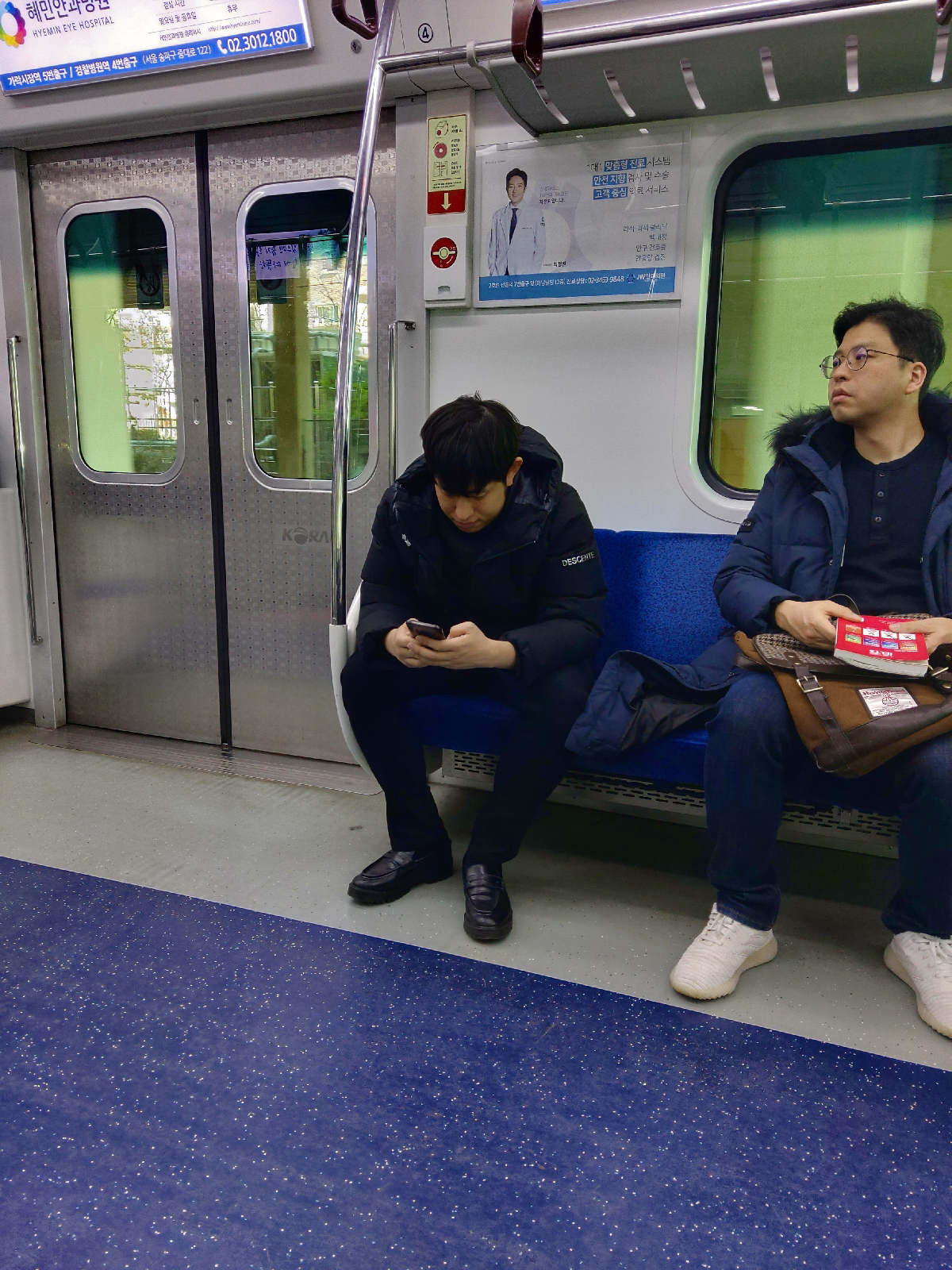 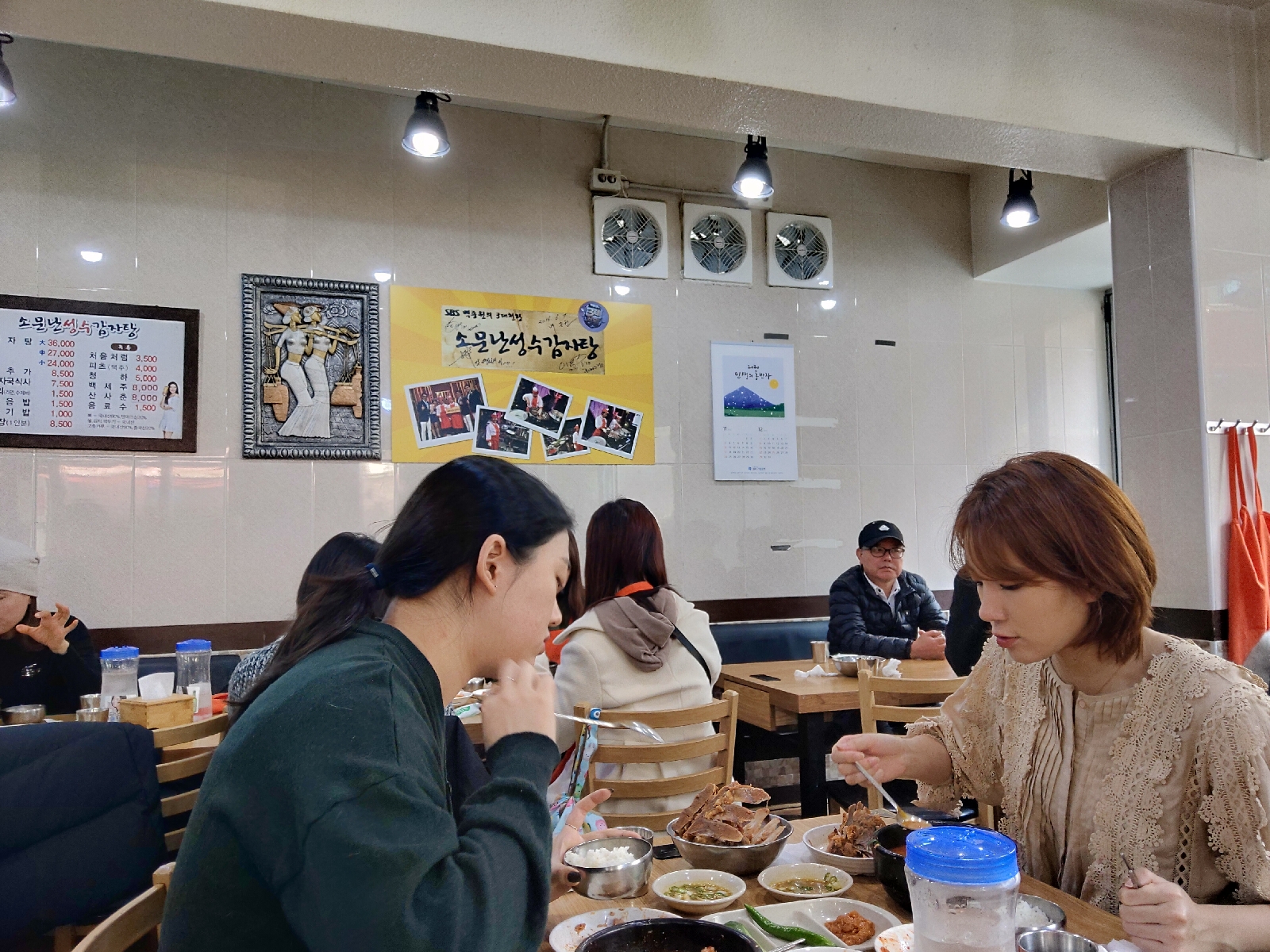 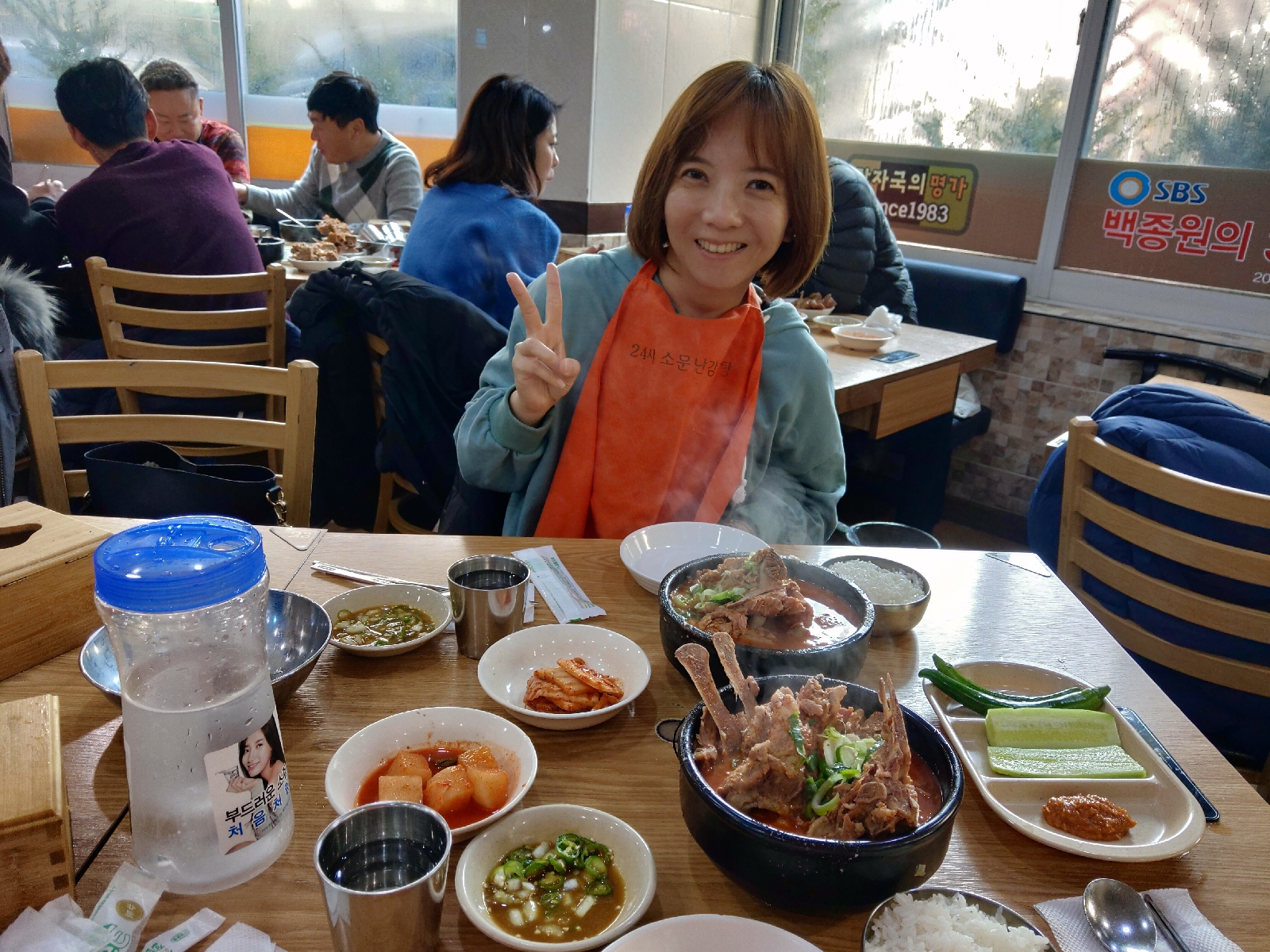 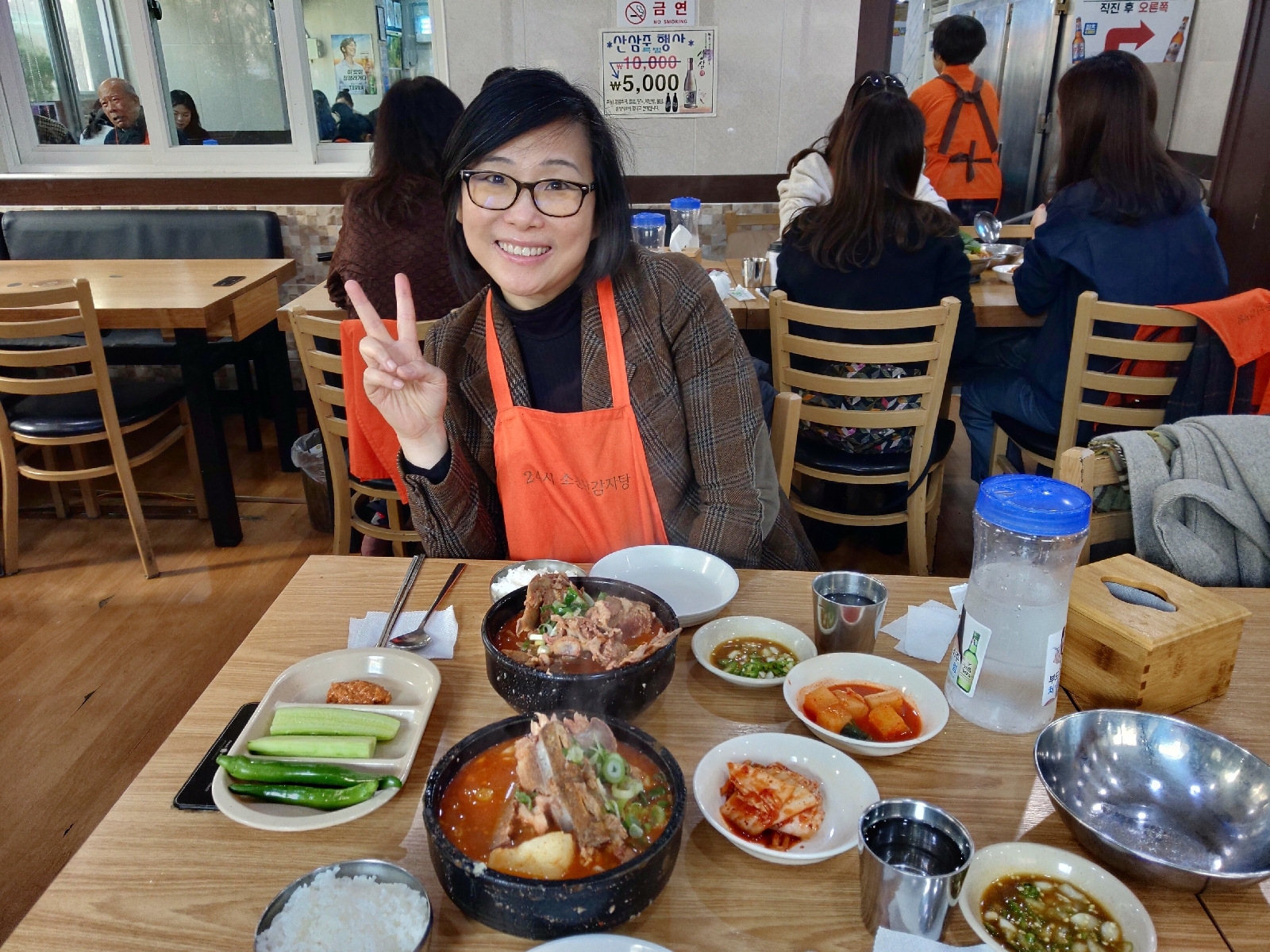 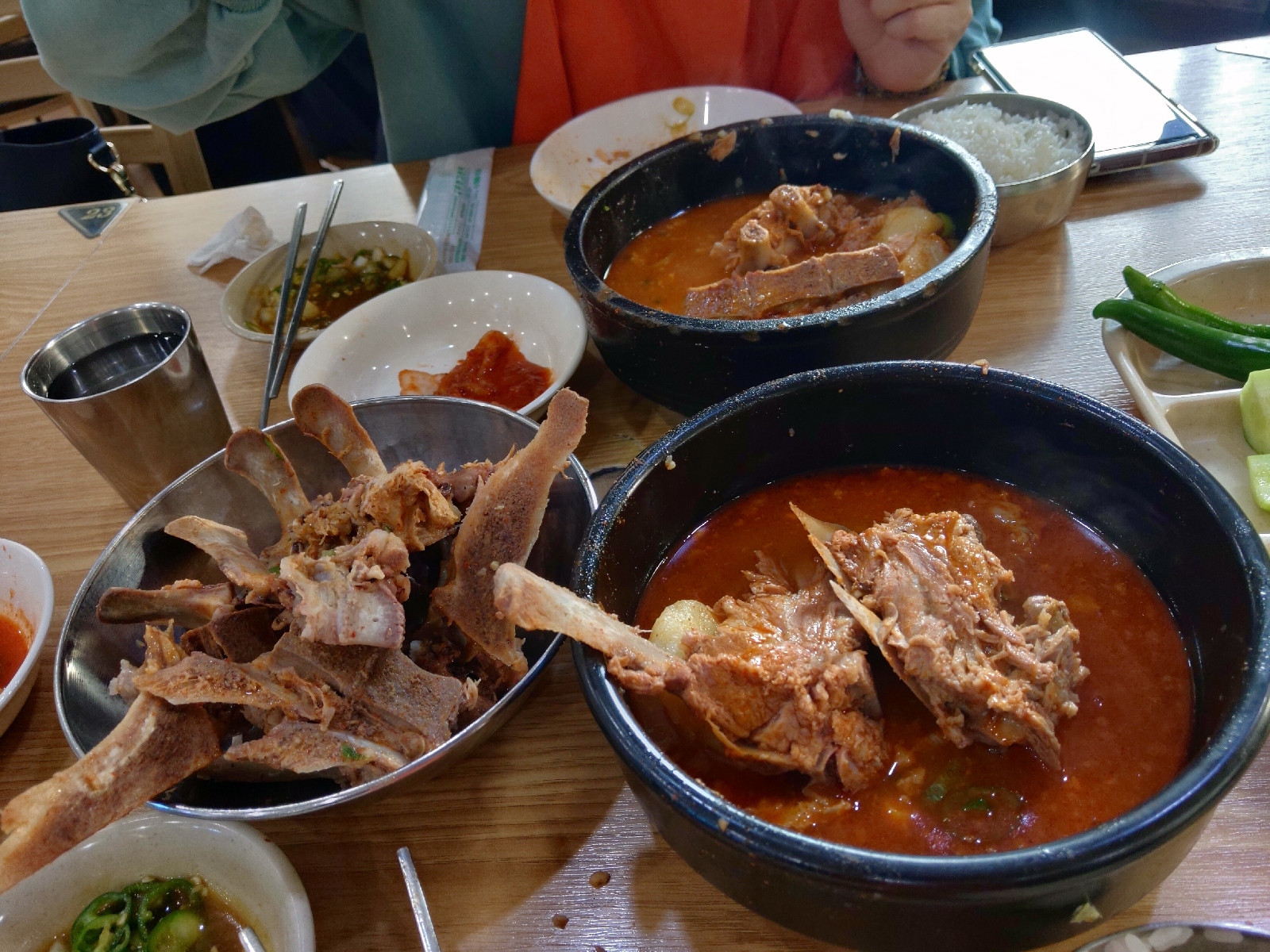 After lunch, Xiao Wen went her own way and I went to Seoul Station... 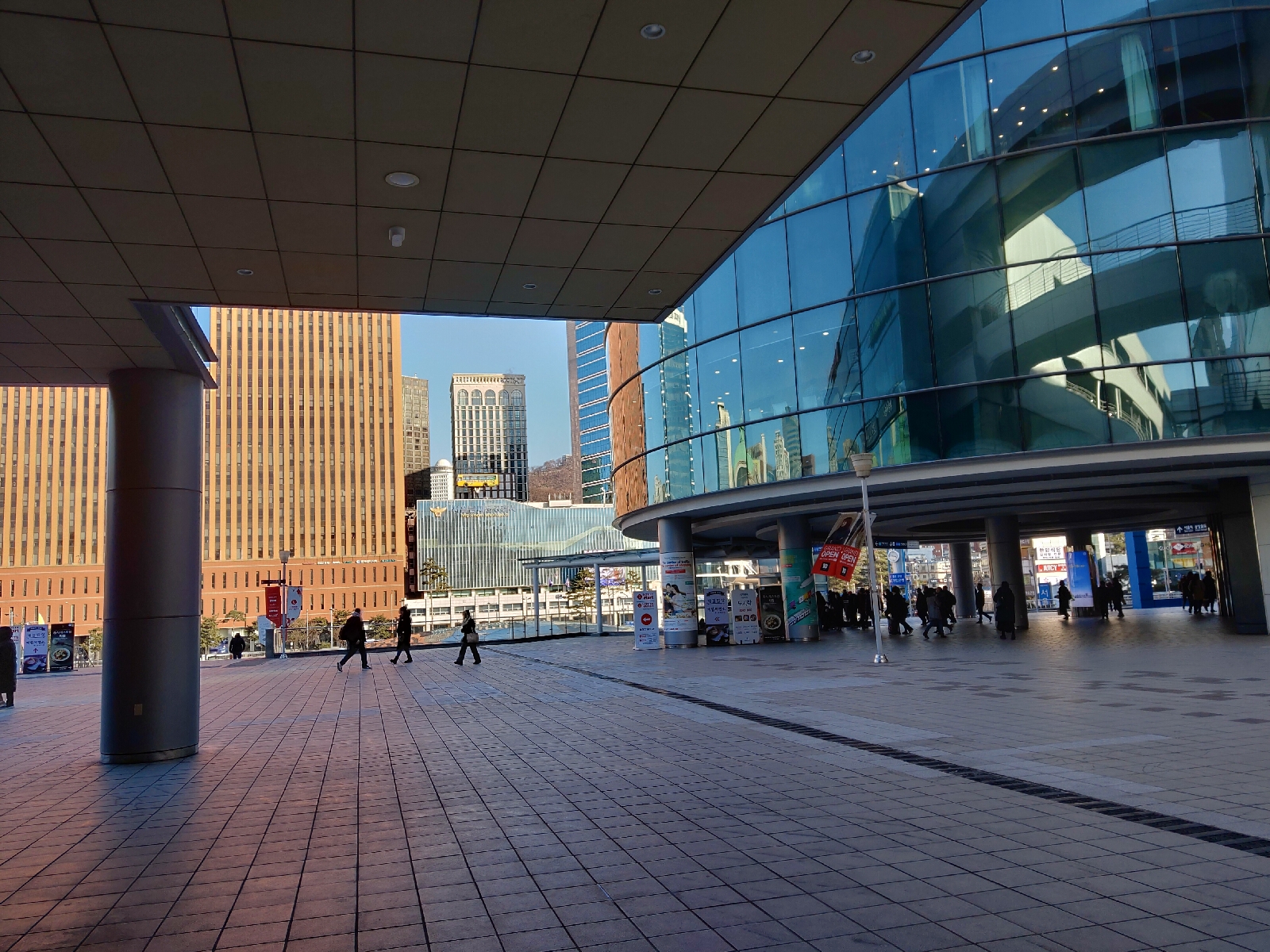 ...because I needed to go to a bigger Lotte Mart to buy stuff home for family and friends. I've stopped buying useless souvenirs like magnets and pouches and keyrings. Food is what work best. 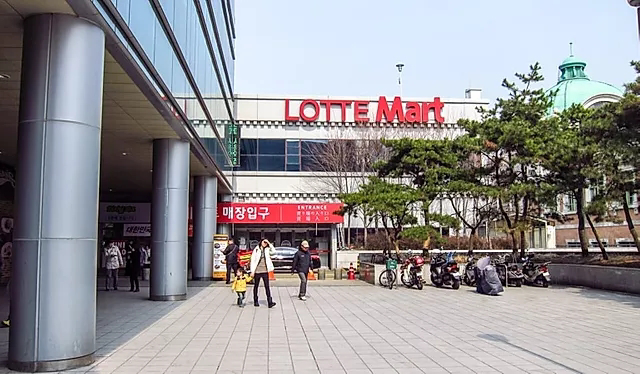 Wee Yin wanted Korean spam and I told her that 선영 Sun Young had told me that this brand is the most popular in Korea, Spam! 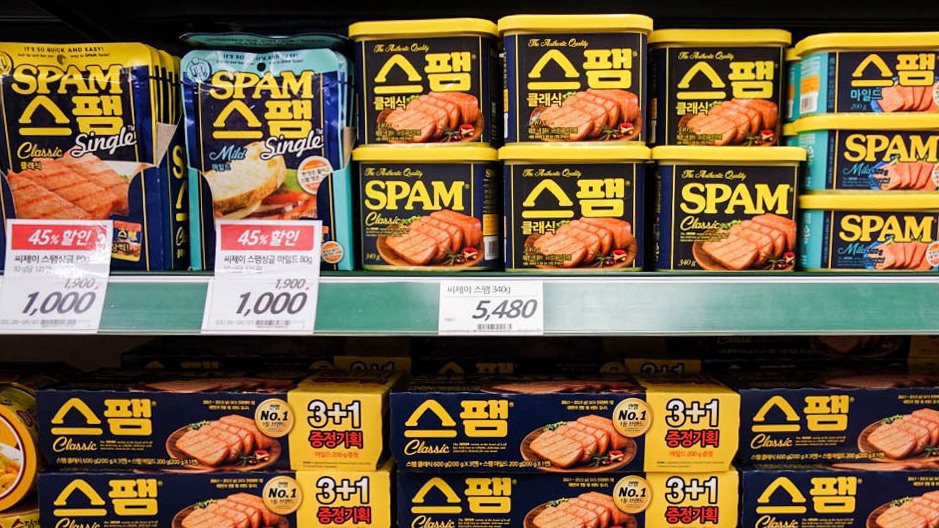 But Wee Yin wanted this one, which I finally found it here in Lotte Mart. I was looking out for it the smaller supermarkets and convenient stores but couldn't find it. 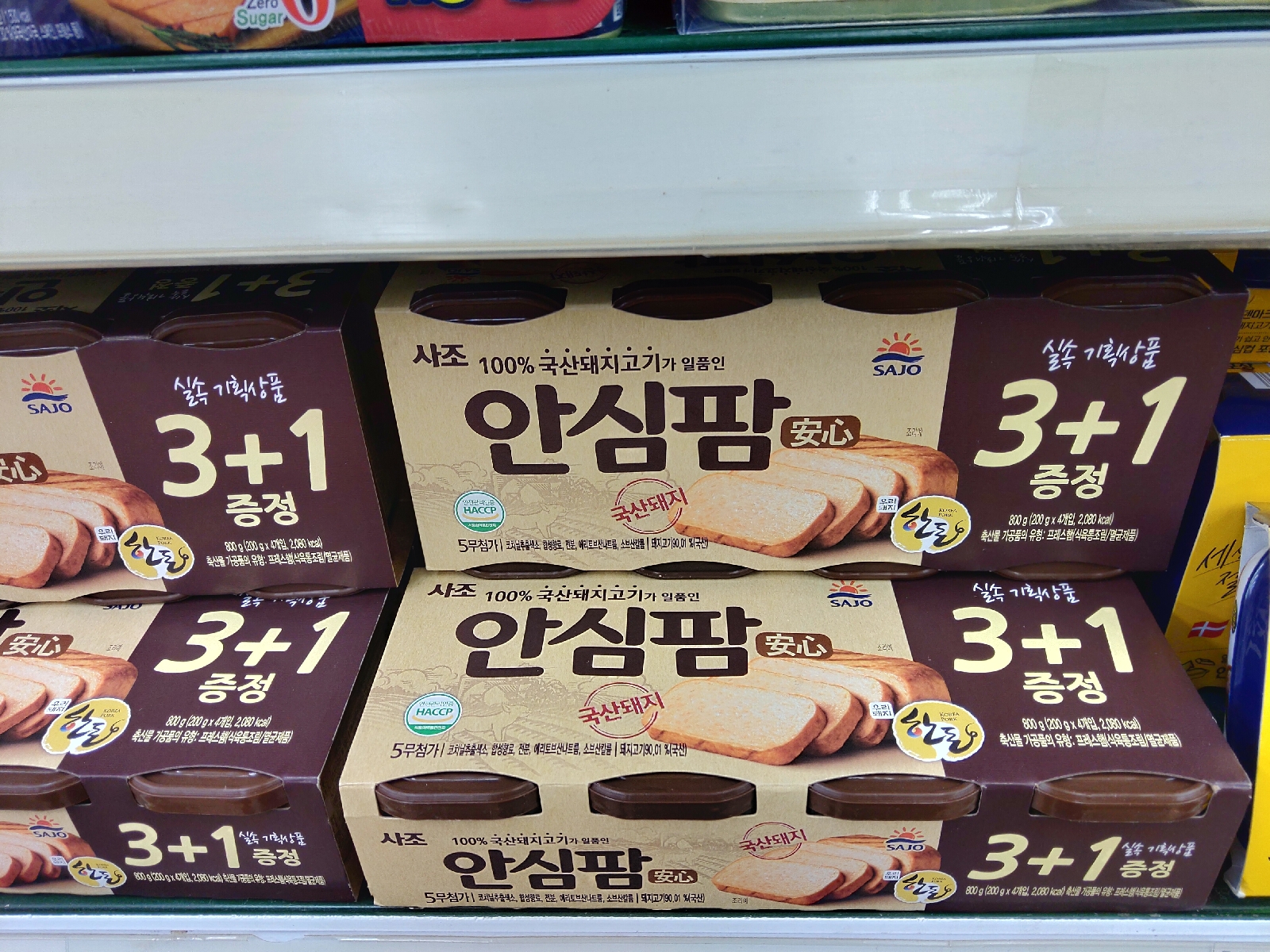 So here's my stash. I'm worried if I can fit all of these in my medium-sized luggage and 20-kg limit. 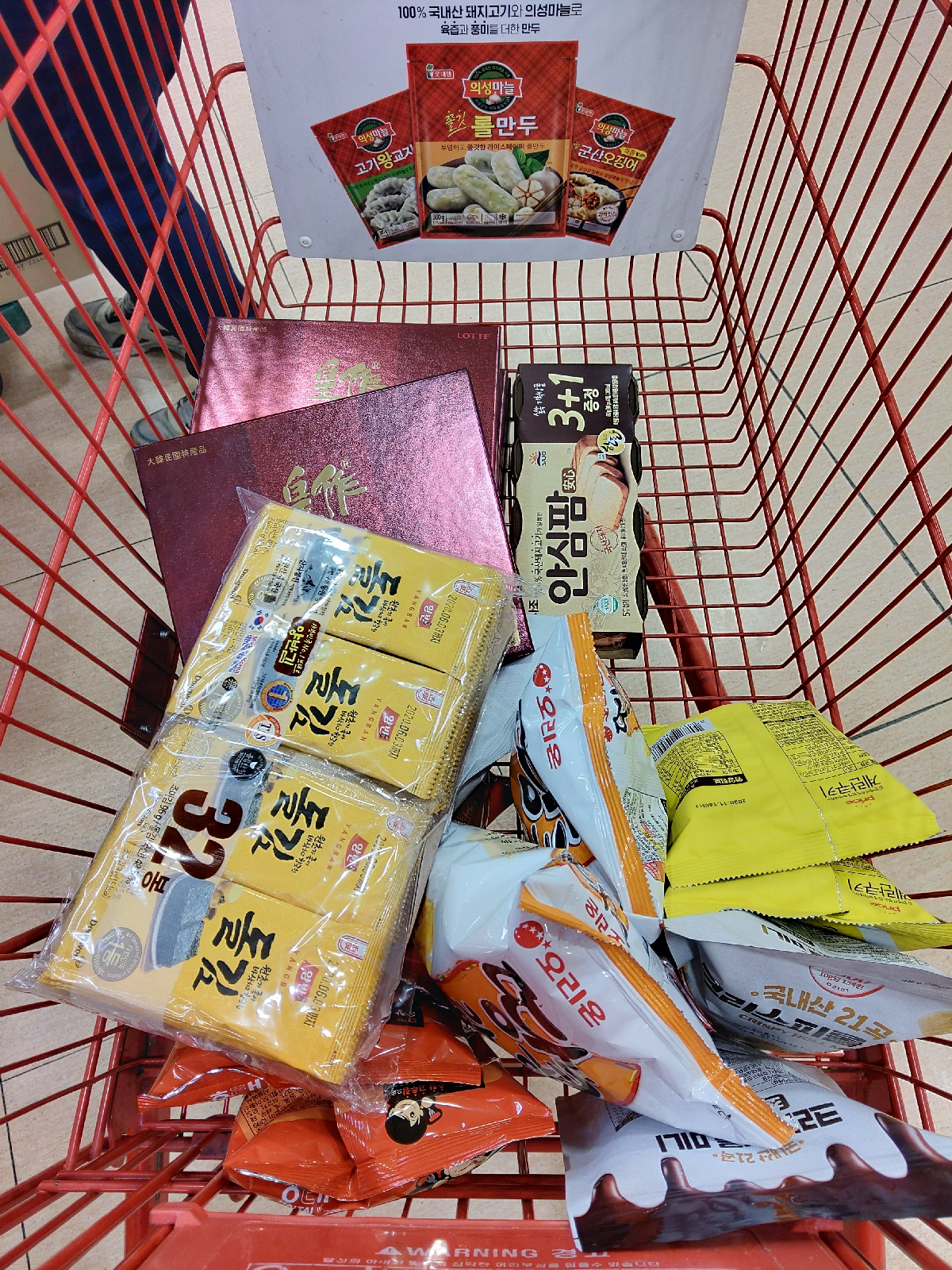 With two big bags of food, I grabbed a taxi home this time and after depositing them all in the hostel, I walked out to the 순대국 sundaeguk restaurant again to have another bowl of blood sausage soup and rice. Yummm... 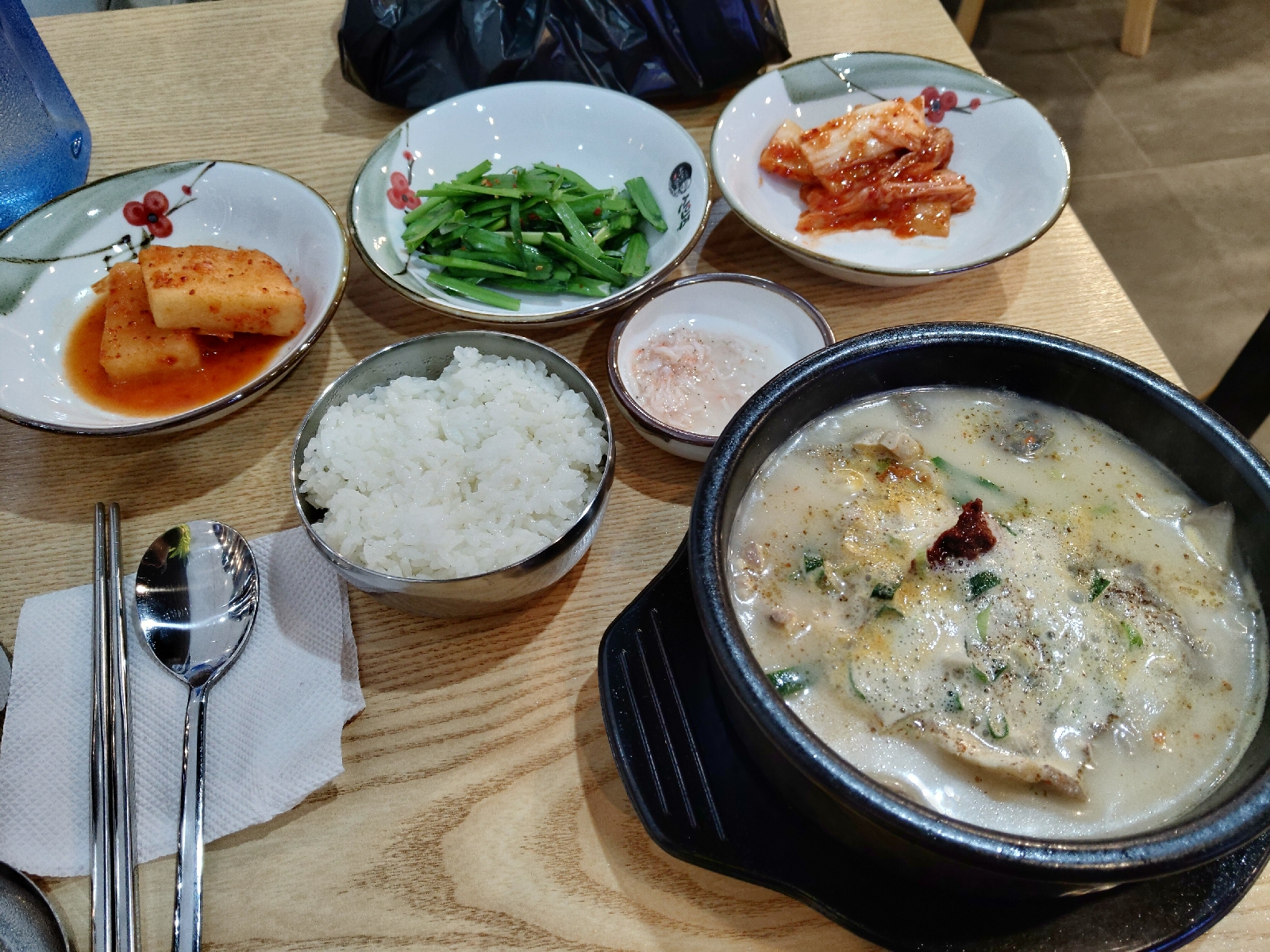