Take a long look at the mirror before we even begin 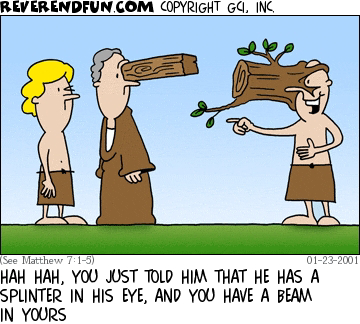 I was reminded today of the Bible verse about the speck and log in the eye and found it here in this passage.

It is a very timely lesson that when we want to complain and judge others, first take a look at ourselves. And by the time we notice our log and try to remove, the speck on the other person eye doesn't seem so bad anymore. And by the time we judge our own actions and behaviour, we know we stand guilty and sinful before our God.

I like NT Wright on this passage in his Matthew for Everyone, where he said:

God intends that his world should be ordered, and that injustice should be held in check. Jesus is referring, not to official lawcourts, but to the judgments and condemnations that occur within ordinary lives, as people set themselves up as moral guardians and critics of one another...


He doesn’t mean that we shouldn’t have high standards of behaviour for ourselves and our world, but that the temptation to look down on each other for moral failures is itself a temptation to play God. And, since we aren’t God, that means it’s a temptation to play a part, to act, to be a ‘hypocrite’ (which literally means a playactor, one who wears a mask as a disguise)...


Jesus, we should note, doesn’t rule out the possibility that some people will eventually be able to help others to take specks of dust out of their eyes. He isn’t saying that there is no such thing as public morality. But he is warning that the very people who seem most eager to tell others what to do (or more likely what not to do) are the people who should take a long look in the mirror before they begin.

I know that I need to stand in front of the mirror more and longer.